Clonguish come out on top in senior league clash against Mostrim 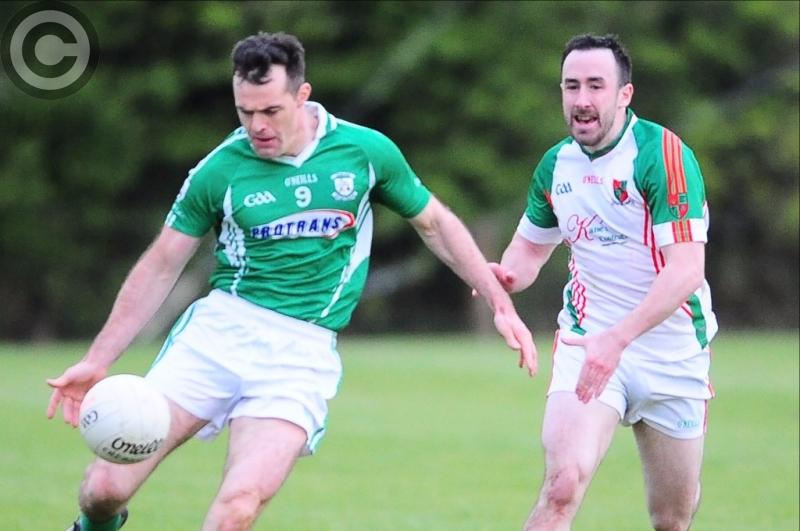 Paul Barden on the ball for Clonguish ahead of Mostrim opponent Shane Kiernan. Action from the All County Football League Division 1 game at Devine Park on Saturday evening last. Photo: Declan Gilmore

First half goals from David and Paul Barden proved to be the decisive scores in the Clonguish win over Mostrim in the All County Football League Division 1 clash at Devine Park on Saturday evening last.

All County Football League  Division 1 - Round 3

Mostrim opened the scoring in the 4th minute but once Clonguish got off the mark they proceeded to establish a grip on the game. The visitors  did have to overcome the setback of losing midfielder Peter Hanley in the 8th minute with an ankle injury and his replacement Mikie McGuinness  registered two fine points.

Mostrim missed the scoring threat of Darragh Doherty and although they tried hard they never looked like winning the match.

Seamus Hannon landed the first score in the 4th minute but Clonguish got their first goal moments later when David Barden finished the ball to the net. Joe O’Brien followed up with a free and another fine score  to give his side a four point lead by  the 7th minute.

Mostrim got back into contention in the 10th minute when Brian Farrell played the ball through to Darren Bloomer who created a goal chance for Cillian Lynn and he found the back of the net.

Two minutes later Paul Barden scored the second goal for Clonguish to restore their four point advantage and they managed to remain in front for the remainder of the match.

Points were exchanged between Alan O’Hara and Mikie McGuinness before Mostrim cut the deficit to just one point by the 19th minute following three scores in a row from Cillian Lynn,  Alan O’Hara (free) and a wonderful strike from Brian Farrell.

Scores from Mikie McGuinness and Joe O’Brien (free) put three between the sides by the 22nd minute and while Lynn replied with a free for Mostrim, Clonguish ended the first half with an excellent point from Paul Barden along with a Colin Farrell free to lead by 2-7 to 1-6 at the break.

Joe O’Brien got the opening point of the second half before Alan O’Hara landed a fine point for Mostrim.  Stephen Norton and O’Brien scores put six between the sides by the 45th minute but two minutes later Mostrim very nearly got a second goal when O’Hara shot over the bar when the goal was on.

Gerard Smith then got up to score a neat point for the home side in the 49th minute but Clonguish replied with points from Colin Farrell and a wonderful Joe O’Brien effort to leave six separating the sides again with seven minutes of the game remaining.

Mostrim tried in vain to get a badly needed second goal but were denied by a combination of good goalkeeping and defending. Cillian Lynn and Aaron Gallagher fired over scores near the end for  Mostrim but Clonguish had already done enough to come out on top.

Collie Clarke’s side are going well this season and registered their fourth win in a row in the Division 1 league when they beat Colmcille by a point (1-11 to 2-7) at Allen Park on Tuesday evening last.