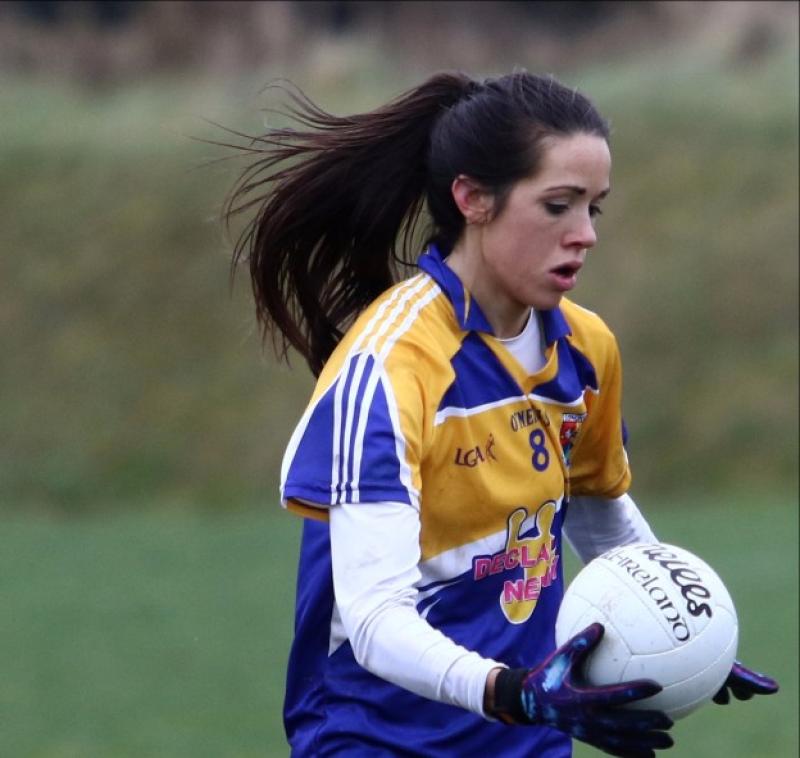 Jacinta Brady pictured in action for the Longford ladies in the National League. Photo: Syl Healy

When Armagh native James Daly took over as manager of the Longford Ladies Intermediate squad at the start of the year he set targets that he wanted his players to achieve and the first was to gain promotion back to Division 3.

Longford now have the opportunity to do that on Sunday when they take on Wicklow in the National League Division 4 Final at the Clane grounds, Co Kildare,  throw-in 2pm.

Wicklow finished second to Longford in the league table and their only defeat was against Daly’s side by the narrow margin of 1-9 to 0-9 in the last round of the regulation fixtures. The garden county  went on to score a hard earned  0-12 t0 2-3  win over an improving Fermanagh side in the league semi-final and the Longford manager is wary of the threat they will pose.

“Going on league form it was expected to be Wicklow against us in the final. But Fermanagh have got better during the course of the campaign and many thought they would win the semi-final. Wicklow are a good team. When we played away to them we knew going into that game that ourselves, Wicklow and Fermanagh were the three best teams in the league. They will give us a tough game in the final,” Daly said.

Longford cruised through Division 4 this year and were comfortable winners in every game except Wicklow in their final round fixture in Roundwood when just a goal separated the sides in the finish with  Emer Heaney getting  the decisive score. Daly admitted it was a below par performance from the ladies that day and is expecting them to step up a gear in the final.

“We played Wicklow a few weeks ago and we were not at our best on that occasion. We will definitely have more to give in the final and it is all about producing the performance on the day which hopefully will happen on Sunday,” said Daly.

Because of their resounding results this season Longford are regarded as the favourites to win the Division 4 title but Daly knows only too well that the tag can carry a burden with the weight of expectation.

“We are the team to beat because we finished top of the table but that means nothing, especially in a final. I managed Armagh a few years ago and we beat every team but lost in the league final to Down. Teams always raise their level of performance for finals and I have no doubt Wicklow will be striving to do that on Sunday.”

Reflecting on the relentless strong displays from Longford this season, Daly has been delighted with the attitude of the players since he took over as manager and It’s something that pleases him greatly.

“What I admire about the girls is the way they want to fight for places on the starting team and the competition is extremely keen. They are a great bunch of girls and their attitude is brilliant. I couldn’t ask for anything more from them with their commitment for the cause of the county.”

Looking ahead to the league final against Wicklow, several players have given Daly something to think about and he knows he and the other mentors, Dara McGann and Paula Kenny, are going to have a selection headache when deciding on the team that will start on Sunday.

“It’s a good problem to have, such is the strength of our squad.  We have a lot of quality players and It’s going to be a tough job to pick the team for the final,” concluded the Longford ladies manager.