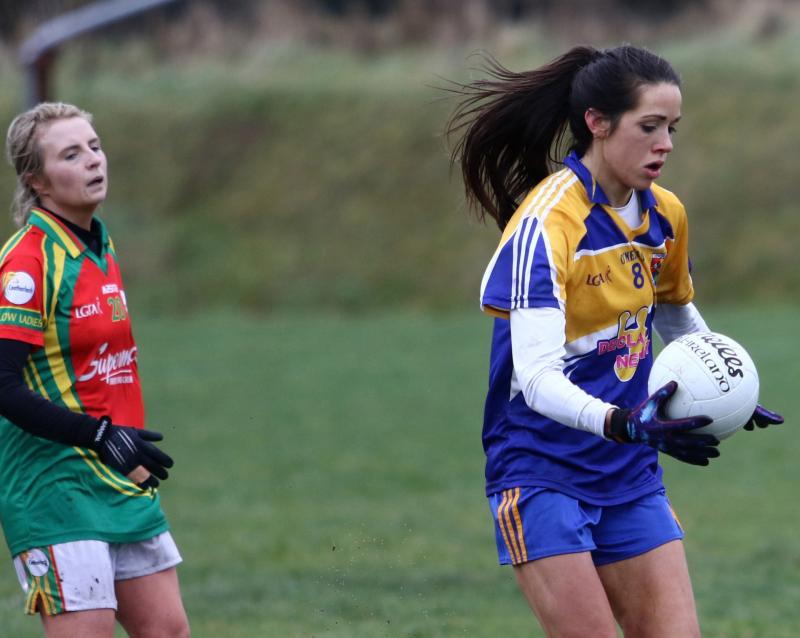 Jacinta Brady pictured in action for the Longford ladies in the National League.

Longford Ladies produced another strong performance as they advanced to the National League Division 4 League Final and are now one win away from promotion back to Division 3 with Wicklow providing the opposition in the title decider on Sunday April 30.

Carlow battled hard but Longford had just too much firepower up front and their defence was solid as usual in this one-sided semi-final clash at the Kinnitty grounds, Co Offaly on Saturday last.

Manager James Daly tried to analysis the game but admitted it was all over as a contest at the break.  “To be honest I was disappointed at times in how we executed the game. The game was over at half-time as well. I thought the five changes we made in the second half was a positive aspect of the display. Those girls came in and took their chances very well and put the other girls under pressure for places on the team for the final.”

Longford finished the game with 14 players after Jacinta Brady got injured in the 40th minute and with all substitutes used they were unable to replace the  midfielder.

In the 12th minute Tierney found the back of the net to grab Longford’s second goal but from that kick-out Carlow broke and got a goal through Aoibheann Gilmartin. But Longford replied with five unanswered points before Carlow got their first point through Sinead Ruth in the 22nd minute.

Longford corner-back Mairead Moore got up to score a point in the 24th minute. Carlow then got their second point as Longford went in at the break 2-11 to 1-2 ahead. Daly said: “It was a professional job done by the girls. I told them in the first 15 minutes to dominate this game and put the pressure on and it was all over before half-time.”

Sarah Tierney opened the scoring for Longford in the second half and then Michelle Farrell got Longford’s third goal when her free ended up in the back of the net. Emer Heaney, Aisling O’Hara and Farrell (free) all tagged on further scores  to extend Longford’s lead to 19 points by the 40th minute.

In the 44th minute Carlow got a second goal through an excellent strike from Clodhna Ní She.

Two minutes later and Longford got another goal after good play between Heaney and Farrell saw the Colmcille girl get her second goal.

Player of the match Michelle Farrell got the final score of the game as Longford ran out very easy  winners.

The Longford manager was delighted with his side’s performance and the contribution of the whole squad. “We have a lot of girls who are working very hard and you want to reward them. Every single girl that played against Carlow contributed to the victory and we can now look forward to the league final.”