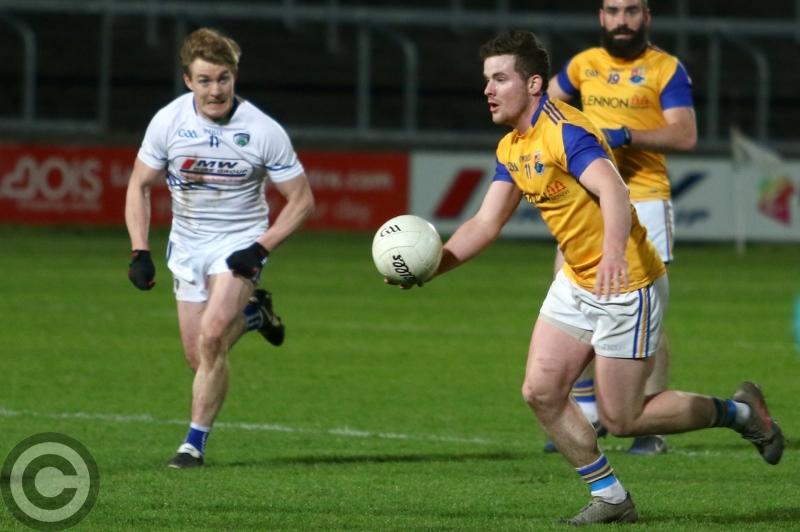 The Longford senior footballers will head for Belfast on Sunday next in the knowledge that they need at least a draw against fellow strugglers Antrim to avoid relegation after losing to Laois at O’Moore Park on Saturday evening last.

The pressure is now on in the fierce battle to secure Division 3 status in the National League and manager Denis Connerton does not need to be told that his side will have to improve greatly on a poor second half performance in Portlaoise if a positive result is to be achieved at Corrigan Park.

Antrim will be hard beaten on home ground, as they proved in their narrow wins over Laois and Sligo, and will be in a fairly confident frame of mind after running Armagh extremely close (1-12 to 0-13) at the Athletic grounds in the Round 6 clash last weekend.

Because of their superior scores difference, a draw in Belfast will be good enough to prevent Longford from making the dreaded drop into Division 4 next season but  hopefully they will win the match to make absolutely certain of survival.

Defeat, on the other hand, will result in relegation and that will be a serious setback in the build up to the Leinster Championship. On the evidence of what was witnessed at O’Moore Park in the league encounter last weekend, beating Laois at the same venue on May 21 is going to be extremely difficult as Peter Creedon’s side gradually get back to full strength.

Powered by a physically strong midfield pairing in John O’Loughlin and Kevin Meaney and the sheer class of Donie Kingston at full-forward, Laois had to win to keep alive their hopes of avoiding relegation and they showed the greater hunger to succeed in what was generally a very entertaining game.

Kingston was supposed to be ruled out due to the groin injury he sustained in the first half of the game against Antrim the previous week but made a rapid recovery to torment Longford, shooting the impressive total of nine points (six frees) in proving to be a constant threat.

While Longford were hard hit by the big amount of frees that were awarded against them by the poor Mayo referee Jerome Henry, particularly so in the early stages of the second half, no excuses can really be made for the latest away defeat on the basis that the overall display was just not good enough.

Depending heavily on the consistently best forward Robbie Smyth for the bulk of the scores this season continues to be the case and he shot six points against Laois, three in each half, to keep Longford in contention.

Liam Connerton (ill) was unable to take his place on the team at O’Moore Park and he was replaced in the attack by Larry Moran with the Killoe forward shooting a couple of points in the first half, the second a very good chance of a goal just before the break when he was clearly impeded by Laois defender Padraig McMahon.

Having said that, Longford keeper Paddy Collum came to the rescue when he saved a point-blank shot from Donie Kingston in the 18th minute and the always dangerous Laois attacker produced a man of the match display.

With Robbie Smyth kicking over three points from play and Michael Quinn, Sean McCormack (free) and John Keegan also on target, Longford led by 0-8 to 0-6 at half-time after playing with the wind but Laois quickly wiped out the deficit with Donie Kingston converting four frees in quick succession in a strong start to the second half.

With the wind assisted direct ball into Kingston, the Laois target man tactic was causing considerable problems for the Longford defence but it was a straight forward move that created the decisive only goal in the 47th minute.

Evan O’Carroll played the perfect pass into David Conway who found himself in a lot of room on the way to blasting the ball to the roof of the net in what was a bad blow for the visitors.

Moments earlier Robbie Smyth squandered a goal chance (blazing the ball wide) when a point would have left Longford on level terms after Sean McCormack converted a free.

Two brilliant scores from Alan Farrell and Donie Kingston extended the Laois advantage to six points (1-12 to 0-9) but they suffered a couple of significant setbacks when commanding centre-half-back Colm Begley was forced to retire injured in the 54th minute while sharp attacker Evan O’Carroll was sent-off for a second yellow card offence in the 56th minute.

That numerical advantage gave Longford a glimmer of hope as they finally awoke from their second half slumber to register four points in a row with wing back Donal McElligott shooting over the bar to start the comeback in the 59th minute and three more scores followed from Robbie Smyth (two frees) to make it very interesting indeed.

The gap was now closed to just two points (1-12 to 0-13) with 67 minutes gone on the clock but Longford unfortunately were unable to get another score with Michael Quinn delivering a poor pass close to the Laois posts in a frantic bid to create a matchwinning goal chance and the danger was cleared.

When Robbie Smyth dropped  a free short into the arms of the Laois keeper Graham Brody deep into stoppage time when a point looked set to materialise, that was the last opportunity for busted Longford.

The 14 men of Laois stuck it out for a vital victory with star man Donie Kingston making absolutely certain of the success when he converted a free in the sixth additional minute to cap a tremendous performance that was the difference between the sides.