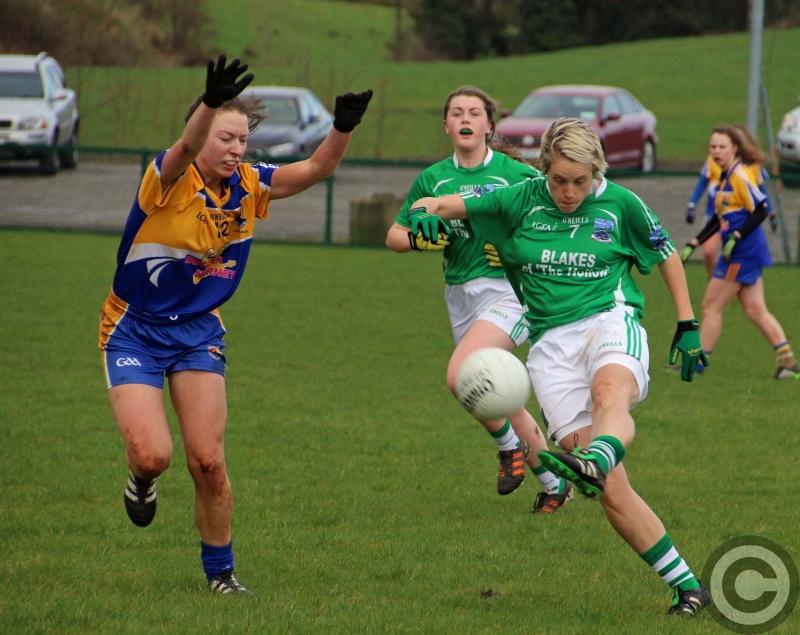 Aisling O'Hara pictured in action for the Longford ladies against Fermanagh in the National League Division 4 game at the Derrylin grounds on Sunday last.

Longford ladies registered their fifth win in a row in Division 4 of the National League and were in control from the start against Fermanagh at the Derrylin grounds on Sunday last.

The wide margin of 13 points separated the sides in the finish and Longford have yet to meet opposition in the division that can give them a tough, competitive game; something that they need before the championship campaign starts. At this stage it’s becoming target practice in the league games.

Unlike previous previous games manager James Daly decided against using all of his bench and just one substitute, Ellie Collumb, was brought on against Fermanagh who are no longer the force they used to be.

It was Michelle Farrell who started the scoring for Longford when getting a point from play. It was a lovely move involving Anna McDonnell who intercepted the ball and found Michelle Noonan who passed into the Colmcille girl.

Farrell followed that up with two frees and then Sarah Tierney, Aoife Darcy and Emer Heaney tagged on points before Aisling O’Hara’s powerful shot ended up in the back of the net. McDonnell, Tierney (two) and Farrell (two frees) registered further points as Longford went in at the break with a commanding 1-11 to 0-2 lead.

Fermanagh tried hard to made a game of it in the second half and at one stage they had outscored Longford 2-3 to 1-3 but that mattered little on the scoreboard. Longford had two players harshly sin binned in the second half; first to depart was Mairead Reynolds and she was then followed by Aoife Darcy.

With Longford down to 13 players Fermanagh were able to score 1-1 without reply in reducing the deficit.  But they still couldn’t get close to Longford who defended so well despite the handicap of the numerical disadvantage.

Michelle Farrell and Emer Heaney scored the Longford goals in the second half and Farrell also fired over two points (one free). Heaney and Aisling Greene also scored points as Longford won with considerable ease.

Having already secured their place in the League semi-final with two games left to play, Longford will want  to continue their winning ways when they take on Kilkenny at home on Sunday next and then travel to Wicklow (who are probably the second best team in Division 4) in their final league game before the last four clash.