Longford hurlers are back in the National League Division 3B Final 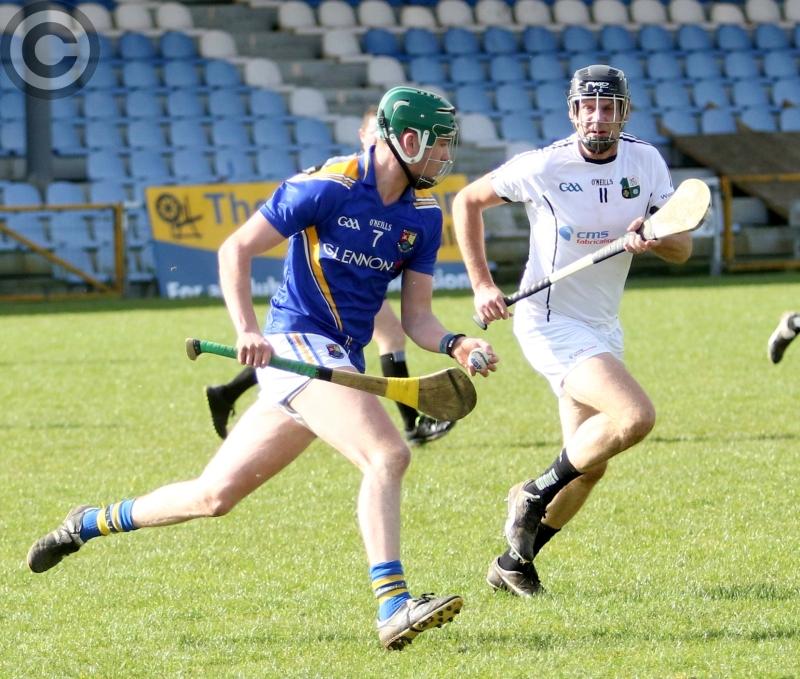 Daire Duggan pictured in action for the Longford hurlers against Warwickshire in the National League Division 3B game at Glennon Brothers Pearse Park on Saturday last. Photo: Syl Healy

With a game to spare (away to Sligo on March 26), the Longford hurlers are back in the National League Division 3B final for the third consecutive season after overcoming the previously unbeaten Warwickshire in the Round 4 clash at Glennon Brothers Pearse Park on Saturday last.

Having said that, the visitors were already through to the league title decider and as a result their manager Tony Joyce decided to rest a number of players including former Antrim star Liam Watson.

Longford manager Ray Gavin fielded his strongest possible side in the quest for a third win in a row in the current National League campaign and the main man was accurate corner-forward Cathal Mullane who clocked up a total of 1-8 (five frees).

Mullane was a constant threat in the first half, scoring 1-5 with the goal coming in the 33rd minute after he got the vital touch to direct a long range free from wing back Daire Duggan to the back of the net.

Duggan landed a couple of brilliantly struck long range frees for Longford while captain Seamus Hannon (2), Patrick Walsh (free), Reuben Murray and Conor Keegan were also on target to leave the home side in a fairly comfortable 1-12 to 1-6 lead at the break.

Full-forward Conor Robins, at the second attempt, fired home the Warwickshire goal from close range in the 15th minute and also registered a couple of points from play while Chris Convery (three frees) and John Reddan accounted for the other scores in the first half.

While Longford extended their advantage with another point from Mullane (free) in the early stages of the second half, Warwickshire gradually got on top and closed the gap with four points in a row through Reddan and Convery (three frees).

Longford were fortunate in that Warwickshire were guilty of shooting seven wides (including a few frees) on the changeover and after Cathal Mullane hit the upright the pressure was lifted when midfielder Patrick Walsh shot over the bar in the 50th minute.

A couple of further Longford points followed from Seamus Hannon (an excellent strike) and Mullane (free) and after a score apiece were exchanged between Conor Robins and Hannon, Warwickshire got right back into contention with a wonderful goal from substitute Kelvin McGee that was created by Robins in the 61st minute.

Just three points (1-17 to 2-11) separated the sides at this late stage and following another score apiece from Mullane (free) and Warwickshire centre-half-back Willie Allen (free) the issue was eventually settled in the second minute of stoppage time when Longford attacker Reuben Murray blasted the ball to the roof of the net for a terrific goal.