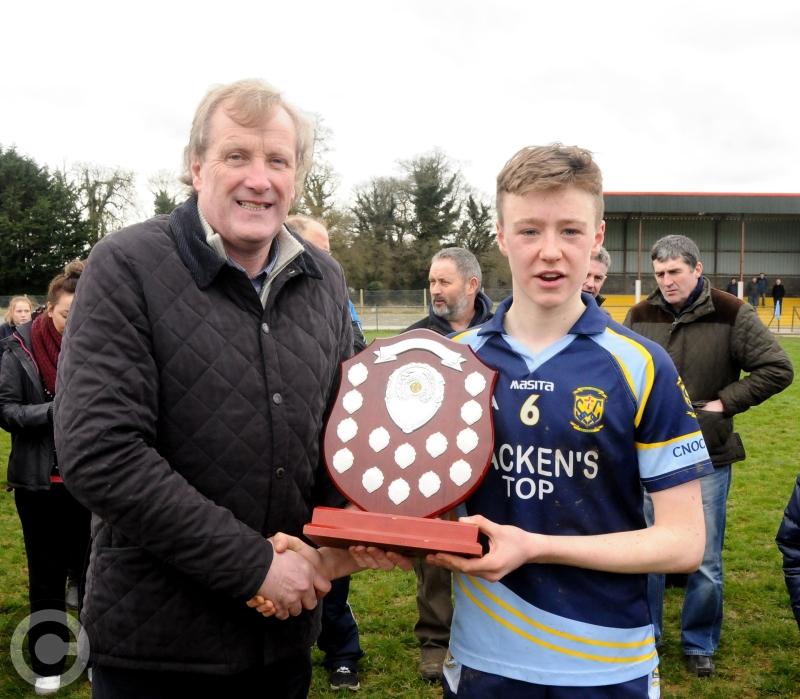 The Granard school had been ahead by eight points at the break but Heywood started the second half with a vengeance and with seven minutes gone on the changeover they had cut the deficit to just two points.

Cnoc Mhuire then hit over two points but a goal from Lawson Obular and a free from Brian Whelan drew the Laois school level midway through the second half. That was the nearest Heywood could get to Cnoc Mhuire who were able to get vital scores in the closing stages of this most entertaining game.

Some terrific defending and fantastic work from their forward line saw Cnoc Mhuire rally in the final two minutes with Cormac Brady’s goal in stoppage time sealing the win.

Cnoc Mhuire made a terrific start to the game when straight from the throw-in they scored their first goal. Aaron Smyth played the ball into Tiarnan Madden who in turn found Jonathan Jackson and the Granard lad shot to the roof of the net.

In the 11th minute Heywood were back in the game when James Hennessy scored a goal and Lawson Obular followed up with a point to cut the lead to three.

Aaron Smyth replied for Cnoc Mhuire and then in the 21st minute Ruairi Corcoran scored their second goal after a fine catch by Jackson. Hynes and Corcoran hit over points and just before the break Sean Fitzpatrick got a point for Heywood to leave the half-time score 2-8 to 1-3 in favour of Cnoc Mhuire.

Whatever was said to Heywood at half-time worked and seven minutes into the second half they had closed the gap to just two points. Tiarnan Madden and  Michael Hynes, who were excellent throughout, then slotted over points for Cnoc Mhuire but Heywood were back in the game with a goal from Obular and a point from Whelan.

Points were traded between Cormac Brady (free) and Aaron O’Dea as the sides were level again in the 51st minute. With the game evenly poised Cnoc Mhuire upped their performance and opened up a three point lead by  the 59th minute. After being taken off, Conor Leonard was brought back on to protect the defence for the remainder of the game and he did just that.

A Brian Whelan free left just two between the sides entering stoppage time but Cnoc Mhuire once again showed great character and captain Ciaran Scanlon replied with a point from a tight angle.

Two minutes into stoppage time Cormac Brady made sure of the success when he got the third goal after receiving the ball from Hynes as another football title was collected by Cnoc Mhuire.