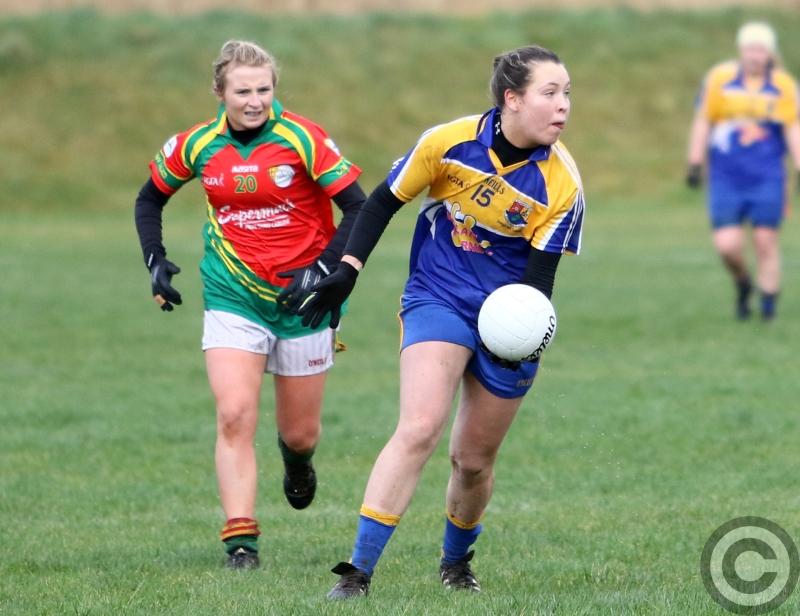 Longford ladies recorded another landslide win in Division 4 of the National League as they crushed Carlow who were ripped apart by the ruthlessness of James Daly’s side at the Clonbonny grounds, Lanesboro on Sunday last.

Once again Longford will have learned nothing from this game but you can only beat what is in front of you. There will be tougher games ahead before the championship away to Fermanagh and Wicklow in the remaining three league fixtures. They have a break now before they face Fermanagh on March 19th.

Although Longford started slow and at one stage in the opening 12 minutes there was just three between the sides, once they got into their stride and got their first goal in the 19th minute they didn’t let up with the scoring and added another seven goals to their most emphatic tally.

Aisling Reynolds (scoring the terrific total of 4-6) was immense throughout while Sarah Tierney, Aisling O’Hara, Aoife Darcy and Aisling Greene all put in fine performances.

The Longford defence was  rarely tested throughout with Carlow scoring all of their five points from frees.

Aisling O’Hara opened Longford’s scoring inside the first minute and Aisling Greene added their second point before O’Hara was on target again. Aisling Reynolds opened her account with a fine point in the 5th minute. Sarah Tierney scored a neat point in the 9th  minute before Carlow’s Cliodhna Ni She fired over two frees.

Two frees converted by Reynolds restored Longford’s five point advantage by the 15th minute and then four minutes later she got her and her side’s first goal. Tierney set Reynolds up for her second goal in the 26th minute. Two more frees from Reynolds saw Longford going in at the break 13 points ahead; 2-9 to 0-3.

Tierney added two more goals to Longford’s tally in the second half; scoring her first with two minutes gone on the changeover. Carlow got their fourth point of the game in the 39th minute with another free from Ni She.

A neat Emer Heaney point was followed up by another Longford goal in the 42nd minute; Jacinta Brady setting up Aisling Greene who then hit over a point to extend the lead to 20 points by the 44th minute.

As Longford brought on substitutes  the scores still continued. Sarah Tierney got two more points while Aoife Darcy scored another goal in the 47th minute as Longford continued to pile on the pressure and also misery on Carlow.

Ten minutes from time Aisling Reynolds got her third goal when her powerful shot ended up in the back of the net. Substitute Aisling McCormack then added on a point before Reynolds scored another fantastic goal in the 55th minute; her fourth and Longford’s eighth.

Aisling O’Hara got her third point of the game in the 56th minute before Aisling Reynolds ended off an excellent individual performance with a pointed free to leave 35 points between the sides in the finish.