Longford in league action at home against Armagh 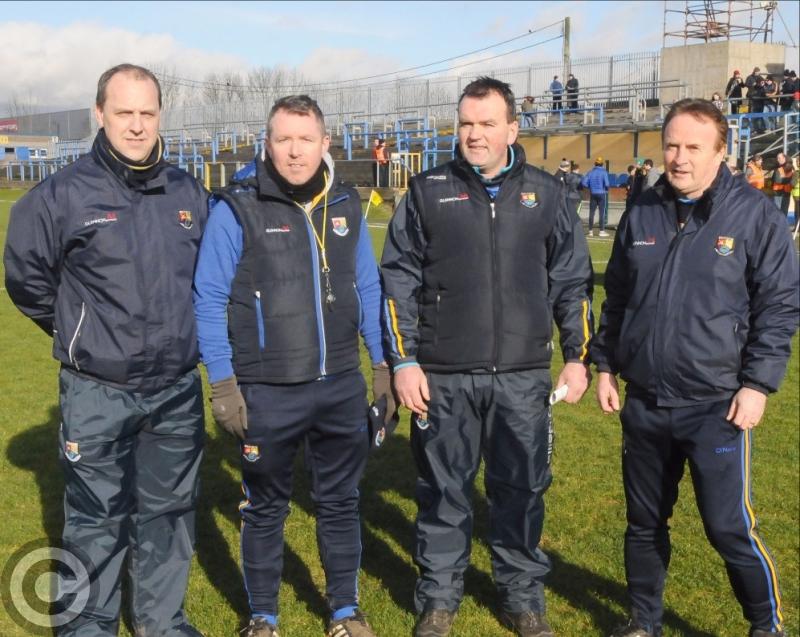 Time ran out for Longford in a determined late bid to salvage the situation away to Louth in the previous round and as a result of that narrow defeat in Drogheda the pressure is back on in the quest to consolidate their Division 3 status in the National Football League.

Longford will be hoping to make the most of home advantage in a tough task against Armagh at Glennon Brothers Pearse Park on Sunday next (throw-in 2pm) and Michael Quinn is in  contention to make his first start since the clash against Cork in Round 3B of the All-Ireland Qualifiers last July.

Out of action since breaking his ankle in a club championship game for Killoe last August, Quinn was brought on in the 54th minute against Louth and while his introduction was unable to swing the issue in Longford’s favour he will be in better shape on Sunday.

But the absence of the injured Diarmuid Masterson is a cause for concern and the powerful player was sorely missed in Drogheda. Whether he is fit enough to play any part in the crucial fixture against Armagh remains to be seen.

Looking back at the Louth game, few can argue with the fact that Longford did not play well  regardless of some of the controversial decisions made by the match officials that went against the visitors.

Losing midfielder John Keegan to a very harsh black card in the early stages of the second half was a big blow and while the county could have snatched a draw in the tense and exciting finish it was not to be.

Manager Denis Connerton will be demanding a considerable overall improvement and particularly so in attack as the forwards struggled for scores in the difficult windy conditions in Drogheda.

Just three points from play materialised, one apiece from Robbie Smyth, substitute Brian Farrell and centre-half-back Padraig McCormack, and that return was just not good enough.

Hopefully, the Longford forwards will click into top gear in the next battle for a brace of valuable league points and with Armagh in a rather vulnerable state so far this season there is a good chance of a home win.

Having said that, the Ulster outfit will be going all out to make amends for the disappointing draw v Sligo and defeat v Laois and on both occasions they somehow managed to let victory slip from their grasp when looking in a comfortable position.

Armagh manager Kieran McGeeney was obviously not happy with the decision to award Sligo a dubious penalty that yielded a last gasp equalising goal in the Round 1 game at Markievicz Park and was furious when Laois came from five points dwown in the final quarter of the contest to snatch a dramatic win deep into stoppage time at the Athletic grounds.

“We made stupid mistakes. We shot too many wides, took the wrong options and made things very hard for ourselves. We have one point out of four which were there for the taking,” commented McGeeney after his side lost to Laois.

Armagh captain Aidan Forker was sent-off in the closing stages of that game, apparently receiving a red card, and if that is the case then the defender will be suspended for the Longford game.

But there are a number of other quality players on the Armagh team, most notably top class forward Jamie Clarke who was brought on against Sligo and Laois (after 24 minutes) and looks set to start in the must win game at Pearse Park.

The original favourites to win the Division 3 title cannot afford to lose further ground if they are to remain in the hunt for one of  two promotion places and apart from the threat of Clarke, other dangermen in the Armagh attack are Ethan Rafferty (who scored 1-5 against Sligo) and Stefan Campbell.

While clearly far from the force they used to be, Armagh are always a physically strong side so Longford will probably need to be at their best to achieve a positive result and boost the confidence factor ahead of the trip to Tipperary the following week.