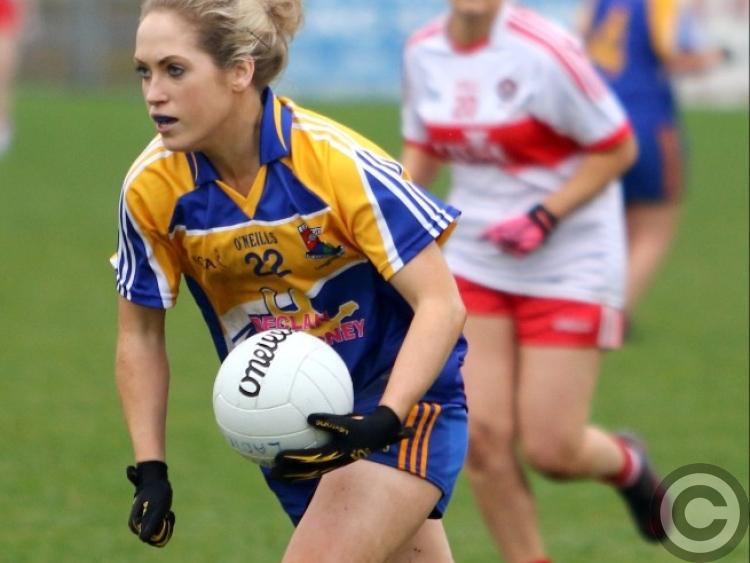 For the first game in the National League Division 4 campaign the Longford ladies didn’t score a goal but the result was the same as before as they scored their third win in a row and a semi-final spot is virtually assured.

It was Derry that started well and had two early chances to open the scoring but hit two wides. Down the other end Longford got their first point in the second minute through Aisling Reynolds. In the third minute Longford keeper Michelle Kilkenny pulled off a fine save to deny Megan Devine.

Points were traded between Greene and Rihanna Curran (free) before Ailbhe McGowan and Sarah Tierney opened up a five point lead for Longford in the 19th minute.

With Greene in fantastic form she hit over a further five points in the first half. Other points were scored by Aisling Reynolds, Ailbhe McGowan, Anna McDonnell and Emer Heaney as Longford went in at the break 16 points in front; 0-18 to 0-2.

Longford made changes at the break with Michelle Farrell one of those players to come on and the Colmcille girl opened her account just two minutes into the second half with a nice point. She then followed that up with a pointed free.

It was all Longford with Aoife Darcy and then Aisling Reynolds stretching the lead to 20 points by  the 39th minute.  Aisling McCormack then followed up with a point. Reynolds, who put in a fantastic performance was very much the playmaker as well as the scorer for Longford in that second half and when she hit over her seventh point in the 43rd minute.

After going nearly 40 minutes without a score Derry got their third point in the 45th minute through Beth Heaney. Longford responded with points from Michelle Farrell, Patricia O’Hara, Aisling Reynolds and a fantastic point from Farrell to go 28 points ahead in the 52nd minute.

The only goal of the game was scored by Derry in the 53rd minute through substitute Sarah Doherty. It mattered little as  Longford replied with points from Sarah Shannon, Aisling McCormack and Anna  McDonnell.

Sarah Tierney set up Shannon for her second point  in the 57th minute and the final point of the game was a wonderful effort from Aoife Darcy as Longford had 30 points to spare over Derry in this very one-sided affair.