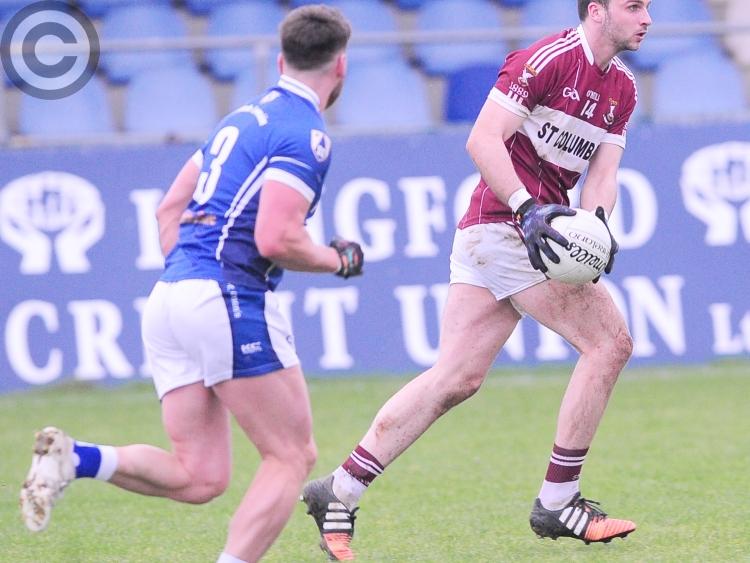 Marvellous Mullinalaghta stuck it out to score a surprise victory over St Loman’s Mullingar at Glennon Brothers Pearse Park and their reward is another home game against the Dublin giants St Vincent’s in the Leinster Club Senior Football Championship semi-final on Sunday November 27th.

Outstanding for the Longford champions was centre-half-forward James McGivney, who fired over five excellent points from play during the course of this close encounter, while his younger brother David also played a leading role in this terrific result as he converted a total of six frees.

A couple of crucial saves by the St Columba’s keeper Patrick Rogers in the second half, who twice denied St Loman’s full-forward Kieran Kilmurray, was also a vital factor in the eventual outcome and the narrow margin of two points separated the sides at the final whistle on Sunday.

Both Aidan McElligott and Jayson Matthews had clear-cut goal chances for Mullinalaghta in the first half, with McElligott having a close range shot saved by the St Loman’s netminder Stephen Gallagher in the 2nd minute, but the home club still ended up leading by 0-7 to 0-5 at the break.

A brace from James McGivney, along with four David McGivney frees and a Jayson Matthews point (when a goal was there for the taking in the 25th minute), accounted for the St Columba’s scores in the first half while on target for the Westmeath champions were Shane Dempsey (2), Kilmurray, Paul Sharry and John Heslin.

The Mullinalaghta advantage was extended with a further point apiece from David (free) and James McGivney in the early stages of the second half but St Loman’s then got a badly needed goal when centre-half-back Paddy Dowdall planted a cracking shot in the back of the net in the 39th minute to close the gap to the minimum, 0-9 to 1-5.

From there until the finish, the game developed into a real ding-dong battle but courageous St Columba’s kept on finding that little bit extra as they outscored St Loman’s 0-5 to 0-4 during the remainder of the match.

James McGivney (2), Shane Mulligan, David McGivney and Aidan McElligott got the other points for Mullinalaghta while John Heslin (3) and Shane Dempsey replied for St Loman’s who almost snatched a late winning goal but Patrick Rogers was the saviour as he produced a great save to keep out a flicked attempt from Kilmurray.