County hang on in frantic finish to beat Westmeath 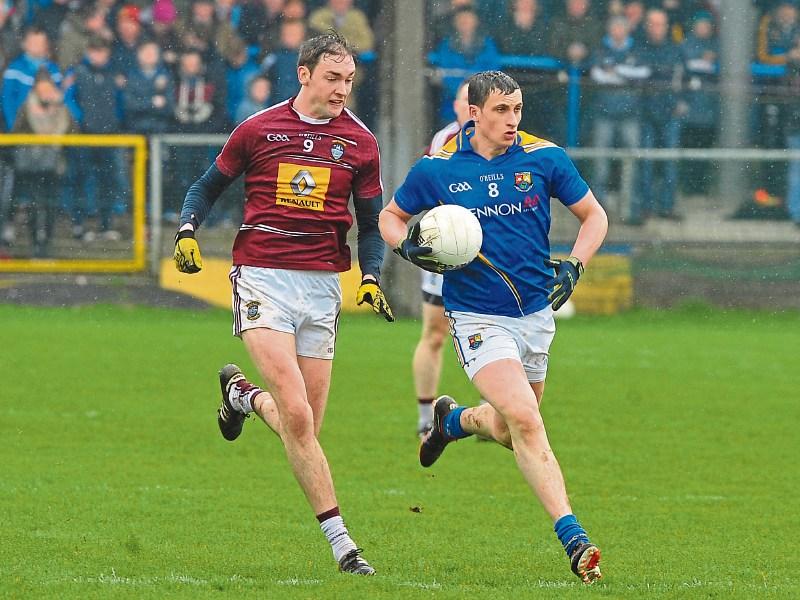 With the way the other results worked out in the final round of Division 3 fixtures in the National Football League, Longford had to do it for themselves in the fierce battle to avoid relegation and showed tremendous character to get the better of neighbouring rivals Westmeath in a tense tussle at Pearse Park on Sunday last.

Had Longford lost they would have suffered the severe setback of the dreaded drop back down into Division 4 but hung on to win by the narrow margin of two points in a frantic finish and it was a shattering blow instead for Westmeath, remarkably relegated for the third consecutive season after reaching the high of Division 1 status in 2014.

It was a great achievement for manager Denis Connerton and his generally young squad to survive in such a competitive league, winning four of the seven games in Division 3 to eventually end up in joint second place in the table alongside Offaly and Clare with the banner county achieving promotion due to their far superior scores difference.

But Connerton will be delighted with the determined manner in which Longford managed to stay up and particularly so with 14 players in the closing stages of the game after Diarmuid Masterson was sent-off for a second yellow card offence in the 62nd minute. The focus will now quickly switch to the Leinster Championship first round clash against Offaly at O’Connor Park in Tullamore on Sunday May 15th and more good news was the return of Barry O'Farrell to make his first appearance this season.

After the second half collapse against Clare in Ennis the previous week, this was a vastly improved performance as Longford reverted to a very effective defensive gameplan. And that really frustrated the favourites Westmeath who came to Pearse Park in a confident frame of mind, searching for the vital win that would have kept them in Division 3.

Mainly due to a wet miserable day, the attendance of just over 1,000 was disappointing and a crucial factor in the tight contest materialised just before the break when Longford fired over two points to hold a slender

Michael Quinn let the ball into Brian Kavanagh who done well to win possession before shooting over the bar in the 35th minute and another well struck score followed from James McGivney in stoppage time that put added pressure on Westmeath going into the second half.

Ray Connellan had squandered a great chance of a goal when blasting the ball wide in the 22nd minute and there was another lucky escape for Longford early on when Callum McCormack shot over the bar with Ger Egan completely unmarked inside and well placed to find the back of the net.

Both sides were guilty of kicking some wides in the first half with the prominent Barry McKeon landing a brace (free and play) in the 6th and 10th minutes while Brian Kavanagh (free) and Dessie Reynolds (a sweet strike) were also on target for Longford.

Callum McCormack registered the first three scores for Westmeath (all from play) while Shane Dempsey and John Heslin (free) got their other two points in the first half. Dempsey was denied a second point in the 27th minute when the umpires waved his shot wide in a disputed decision, much to the anger of the away supporters situated in the ‘solitary’ stand behind the goals.

So it would be fair to suggest that Longford were rather fortunate to be in front at the break but they were the better team for most of the second half. Three points in a row through Brian Kavanagh (two frees) and influential substitute Robbie Smyth in a decisive spell between the 41st and 44th minutes established a grip on the game. The long range shot from Smyth bounced over the bar and the ball might well have ended up in the back of the net past the stranded opposing keeper Darren Quinn.

Plenty for the home supporters to shout about in this local derby and after John Heslin (free) got Westmeath’s first score of the second half in the 46th minute, Longford were dealt a blow soon after when James McGivney was dismissed for a black card offence.

But with Michael Quinn and Darren Gallagher, in particular, continuing to make their presence felt at centrefield, Westmeath conceded another score when Quinn fired over a terrific point from near the sideline in the 50th minute to leave his side 0-10 to 0-6 ahead.

Then came a real turning point when Paddy Collum produced a great point-blank save to prevent John Heslin from scoring a goal for Westmeath in the 53rd minute but Heslin did close the gap when kicking a well struck point soon after.

A brace of points apiece were then exchanged between Brian Kavanagh (free), Westmeath impact substitute Paul Greville (play), Barry McKeon (free) and John Heslin (free) along with the dismissal of Diarmuid Masterson.

But moments later in the 63rd minute Robbie Smyth landed a glorious point close to the sideline to leave the home county 0-13 to 0-9 ahead and that proved to be Longford’s last score of the game.

Westmeath tried hard to salvage the situation and almost snatched a badly needed goal in the 69th minute when a close range flick from Paul Greville was saved by Paddy Collum who done well to keep his net intact on this occasion.

It was getting very anxious and two more Westmeath scores deep into stoppage time from John Heslin (free) and substitute John Egan left the dangerous lead of just two points separating the sides. The visitors then shot a wide in failing to engineer a dramatic last gasp winning goal, much to the relief of Longford who survived to emerge victorious in securing their Division 3 league status.