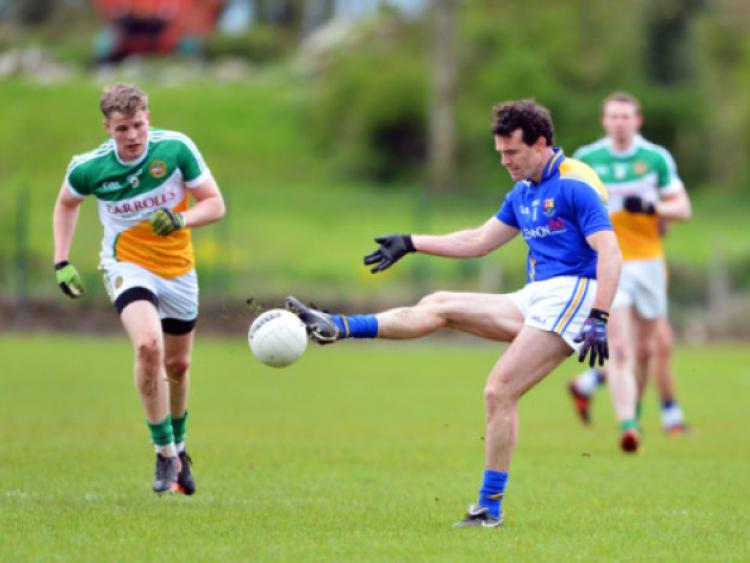 With the Leinster Championship first round clash against Wicklow just over a week away (Sunday May 26th), the performance and players left unscathed was the main objectives for Longford in their final challenge match against Offaly at the official opening of the new facilities at the redeveloped Young Grattans grounds, Dunbeggan Park, on Sunday last.

Longford got the performance and the win and while a few players went off with knocks there was nothing too serious as they finalise preparations ahead of the big game in Aughrim. The pleasing thing for supporters who were at the game was the return of the so influential figure of Paul Barden. The captain, having last featured in the first half of the game away to Armagh in the Division 2 National league campaign, looked in good shape against Offaly and chipped in with three points before the management decided to take him off in the 29th minute.

Apart from Paul Kelly who was doing exams, Longford had a strong panel out for the game with Robbie Smyth returning from a shoulder injured he sustained against Kildare in the Leinster U-21 final. There was one notable absentee and that was David Barden. The Clonguish player wasn’t available for the game against Carlow in the previous challenge match and has apparently left the panel.

Following a most frustrating league campaign after losing all seven fixtures when they were hit with injuries, Longford now have a strong squad to choose from ahead of the Wicklow game but will be minus the services of Peter Foy who broke two bones in his leg when in action for Slashers in a Division 1 league clash against Carrickedmond on Friday evening last.

The starting 15 against Offaly could be very much along the lines of the team that will start in Aughrim but a few players who came on as substitutes definitely gave manager Glenn Ryan something to think about in providing a few selection headaches. However, Donal McElligott is set to be ruled out with a hip injury but that is not confirmed yet.

Longford made a good start to the game with Sean McCormack (free), Paul Barden (two), Shane Mulligan and Robbie Smyth firing over scores to give them a 0-5 to 0-0 lead by the 10th minute. Offaly’s first score came in the 12th minute from a Willie Mulhall free.

Three excellent points from Smyth, Shane Doyle and Barden extended the Longford lead by the 26th minute. Offaly responded with three points in a row to cut the gap to three but an excellent long range strike from Michael Quinn and a neat Francis McGee effort gave Longford a five point lead at the break, 0-10 to 0-5.

Offaly started the second half well with five unanswered points by the 48th minute. But Longford responded well to regain the upper hand and further scores materialised from Aidan Rowan and two Sean McCormack points (one free) by the 60th minute.

The lead was extended minutes later when JJ Matthews scored a goal and Bernard McElvaney followed up with a point. With a host of changes being made Longford faded in the closing stages and conceded a goal late on. However, they replied with a point from McElvaney before Niall McNamee got the last score of the game in additional time from a free.

In the end it was a good challenge for Longford who played some nice football and looked very sharp but the real test for them is in Aughrim on Sunday week with a tough task against Wicklow.