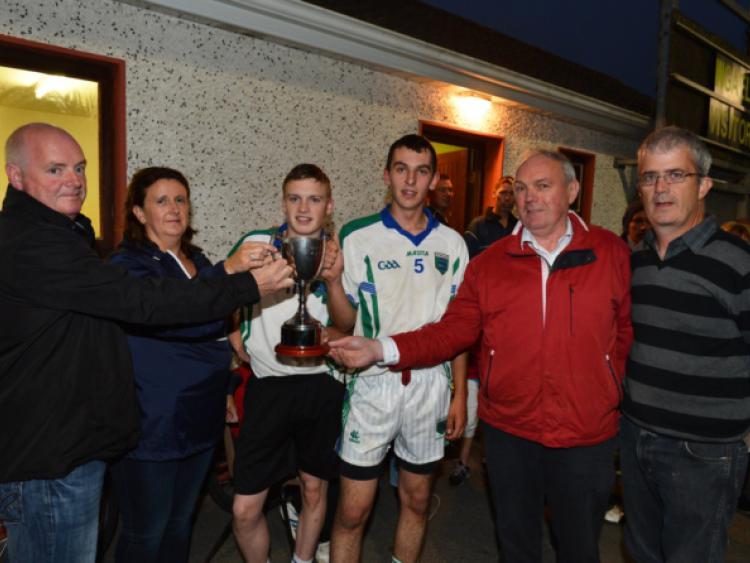 It took Western Gaels quite some time to assert their superiority over Southern Gaels in the Minor ‘B’ Football Championship (13-A-Side) Final at McGann Park in Kenagh on Thursday evening last.

It took Western Gaels quite some time to assert their superiority over Southern Gaels in the Minor ‘B’ Football Championship (13-A-Side) Final at McGann Park in Kenagh on Thursday evening last.

But from the moment Eoin Sorohan fired home a cracking goal for the Rathcline/Grattans amalgamation deep into first half stoppage time, the writing was on the wall for the Cashel/Killashee combination.

That crucial score left Western Gaels leading by 1-2 to 0-1 at the break and they stepped up another couple of gears on the changeover in pulling right away for a most emphatic victory in the finish.

Shane Kenny took over completely at centrefield, scoring five points in the process of producing an impressive second half performance, while Eoin Sorohan figured prominently in the full-forward-line.

Sorohan capitalised on a mistake to grab a gift second goal in the 43rd minute and he ended up with a total of 2-3 to his credit in inflicting considerable damage.

Centre-half-back Jack Rooney was also much to the fore for Western Gaels but it might have been a different story were Southern Gaels able to field their strongest side as they were short several players for different reasons with the injured Andrew Farrell (a member of the county minor squad this year) the most notable absentee.

The Cashel/Killasheee amalgamation were guilty of some very poor finishing in the first half and all they could manage was a terrific long range point from resolute defender Shane Bannon, unquestionably the best player for the losers.

Shane Kenny failed to convert a first half penalty for Western Gaels when his kick was well saved by opposing keeper Shane Clarke and after also kicking a few wides, Rathcline/Grattans ran out easy winners in the end.