Killoe march on in Leinster 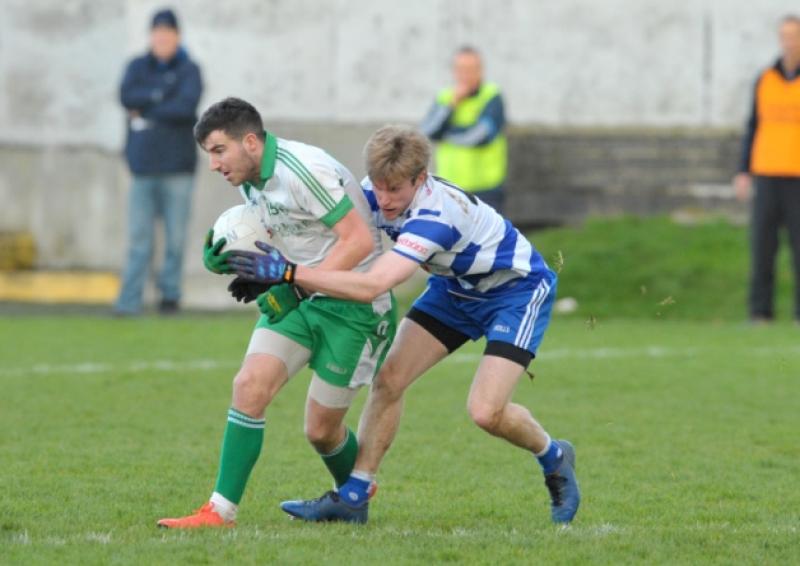 Guilty of some very poor finishing throughout this tight Leinster Club Senior Football Championship quarter-final, kicking a total of 13 wides, Killoe were still good enough to knock Navan out thanks to a glorious spell in the second half that yielded six points in a row.

Guilty of some very poor finishing throughout this tight Leinster Club Senior Football Championship quarter-final, kicking a total of 13 wides, Killoe were still good enough to knock Navan out thanks to a glorious spell in the second half that yielded six points in a row.

There was cause for considerable concern when Emmet Og ended up trailing by two points, 1-3 to 0-4, at the break when they were clearly the better team and O’Mahonys stretched their advantage when corner-forward Shane Gillespie fired over a cracking score from a tight angle with a couple of minutes gone on the changeover.

That was really putting it up to the Longford champions but they refused to panic and inspired by Michael Quinn who burst his way through to blast the ball over the bar in the 35th minute, five more points quickly followed much to the sheer delight of the Killoe supporters among the estimated 1,000 attendance who braved the bad weather.

The conditions were difficult at wet and windy Glennon Brothers Pearse Park on Sunday last, and mistakes were made, but when Emmet Og eventually got their scoring act together the match swung in their favour.

After the Quinn point which proved to be a great lift, another defender Joe McCormack (starting in place of the injured Shane Dowd) surged forward immediately and went close to getting a goal with a well struck shot that clipped the post on the way over the bar.

Moments later Sean McCormack fisted a point to leave the sides all square in the 37th minute and the Killoe dominance continued when big midfielder Simon Kiernan awoke from his slumber to land a brace of brilliant points along with a free converted by Sean McCormack, the latter always a threat at full-forward.

So in the space of seven minutes, Killoe had come storming back from three points down to lead by the same margin (0-10 to 1-4) and they showed a lot of character to rescue the situation.

But Navan were not done for yet and a point apiece from Ruairi O Coileain (free in the 45th minute) and Shane Gillespie (bang on target in the 52nd minute) closed the gap to the minimum of margins.

Moments later Killoe suffered a severe setback when their excellent full-back Padraig McCormack was forced to retire injured and while the force was now with O’Mahonys in their search for the equalising score they failed to convert a free in the 55th minute.

A costly miss, to say the least, and the visitors kicked a total of six wides during the course of the game that was spoiled by a deceptive wind that was blowing all over the place.

There was still time for Navan to snatch a draw and extra-time was looking likely before Killoe made sure of the hard earned victory with a point from a close range free converted by Sean McCormack in the second minute of stoppage time, awarded for a foul on Mark Hughes who generally figured prominently in attack despite failing to register a score on this occasion.

O’Mahonys tale of woe was complete when their chief marksman Ruairi O Coileain was sent-off on the stroke of the full-time whistle and Emmet Og had to dig deep to survive this serious test.

But they managed to come out on top, calling on the value of experience they have gained in recent years, and Killoe march on in Leinster with Portlaoise next up in the semi-final at O’Moore Park on Sunday November 22nd.

Whatever Emmet Og manager Declan Rowley said in the dressingroom during the half-time break certainly had the desired effect and his players will be really fired up to gain revenge for the narrow defeat they suffered against Portlaoise at the same penultimate stage in 2012.

For the moment this exceptional Killoe team can savour their latest success but will certainly not to able to afford the same sort of misfiring first half display they produced against Navan O’Mahonys if they hope to reach the provincial title decider.

So there is room for improvement in the build up to the big match against Portlaoise but they did get off to a strong start on Sunday last to lead by 0-3 to 0-0 after eight minutes, the scores coming from Sean McCormack and Denis McGoldrick (two frees).

A heavy challenge on Michael Quinn earlier on did not stop the commanding Killoe captain from making his usual major influence but his team got scrappy for the remainder of the first half in allowing O’Mahonys back into contention.

Midfielder Cormac McGuinness got the opening Navan score in the 8th minute and another point followed from a free converted by Ruairi O Coileain before the same player snatched the only goal of the game in the 21st minute.

O’Coileain planted the ball in the back of the net after a free from Jake Regan had rebounded back off the upright and pointed frees were then exchanged through Denis McGoldrick (22 mins) and O’Coileain (24 mins) as the poor first half stuttered to a close.

Things did not look great for Killoe when Larry Moran squandered three decent chances in the early stages of the second half but those precious six points in succession changed the picture dramatically.

The decent Navan attack were then met with fierce resistance from such a resolute Emmet Og defence, with Liam Hughes continuing the great form he has shown throughout the championship season.

As it turned out the Meath champions were restricted to just three scores in the exciting second half and Killoe done enough to get over the line in their quest to qualify for the Leinster club final.