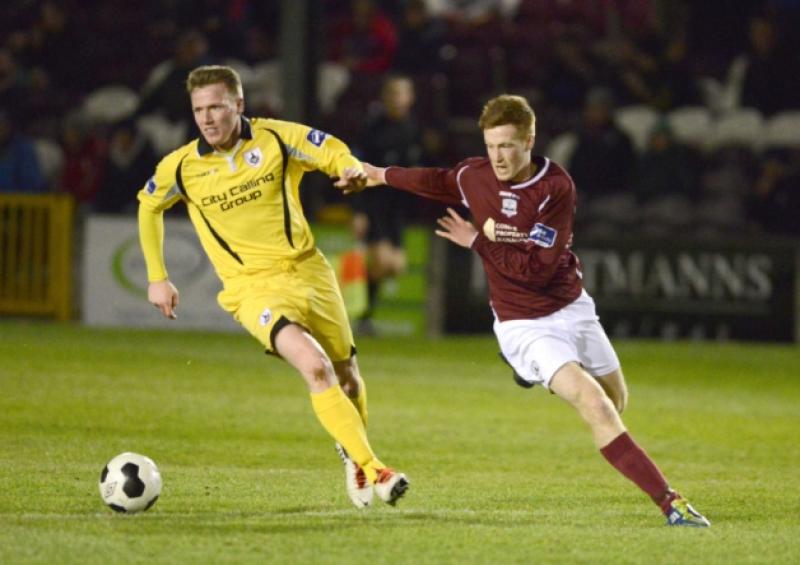 Longford Town striker David O’Sullivan started the new season off as he had finished the last with the only goal that decided this contest at Eamon Deacy Park in Galway on Friday night last between two of the promotion favourites in the First Division.

Longford Town striker David O’Sullivan started the new season off as he had finished the last with the only goal that decided this contest at Eamon Deacy Park in Galway on Friday night last between two of the promotion favourites in the First Division.

O’Sullivan finished as the league’s leading goalscorer last year and it took him 70 minutes to open his account for 2014, getting onto a Rhys Gorman through ball to coolly slot a shot past Galway keeper Conor Gleeson.

The former Mervue United netminder thwarted the Town on a few occasions, especially in the first half when he produced an excellent save to deny Pat Flynn. Gleeson was one of seven former Mervue players in the Galway FC starting line-up.

The new club have quality in their squad but lacked real conviction and composure up front. They were the better side in the first half but failed to put away any of the chances they created.

Town manager Tony Cousins told the Leader after the game that although it was good to get the win, it is still early days. “It’s a good start but that’s all it is. It’s hard sometimes if you have a bad result at the beginning of the season to get momentum going. It’s a clean sheet as well and that pleases me most of all. I thought we looked really solid. It was a big occasion for both sets of players but this game won’t decide the league; it’s a win and that’s what it is.”

It was a big occasion for Galway with President of Ireland Michael D Higgins in attendance among an attendance of almost 2,500. The home side had started brightly but as the game wore on the Town improved and really got going with midfielder Stephen Rice immense. The former Shamrock Rovers player controlled this vital sector.

Cousins paid tribute to his team captain Rice and also other new signings Pat Flynn and Pat Sullivan: “I had to get leaders into the dressing room. We came so close last year. You did feel that when Mark (Salmon) was ruled out with a long term injury that we lacked the drive in the middle of the park. It was important to rectify that and you can see that with Rice. It was also great to bring in Pat Flynn and Pat Sullivan.”

Despite the home side starting lively it was the Town who had the first real chance on goal but Lorcan Shannon hit his effort over the bar. In the 8th minute Don Cowan’s drove his low shot wide.

Galway had plenty of the ball and a few half chances but nothing to really trouble Town keeper Chris Bennion. In the 30th minute Longford had a chance to break the deadlock; Shannon’s free-kick found the head of Flynn but Galway keeper Gleeson put the ball out for a corner.

Minutes later Jake Keegan squandered a great opportunity for the home side. Vinny Faherty’s pass found Keegan and he got in front of the Town defence but hit his shot wide with the goal at his mercy.

The Town were the better side in the second half and took the game to Galway. In the 49th minute Gorman blasted a free-kick over the bar and then in the 56th minute Shannon played a great ball into Peter Hynes but his header was saved by Gleeson.

Galway then enjoyed a good spell with former Town player Ryan Connolly firing over a free-kick while Rice blocked Jason Molloy’s shot and then Shanahan should have done better with his attempt in the 67th minute.

A goal finally arrived in the 70th minute when O’Sullivan latched onto a Gorman through ball and he made no mistake in finding the back of the net. Town manager Cousins knew that if the striker got a chance he would score. “I have to say that they marshalled David well tonight. I said to him at half-time ‘as a striker your chance will always come.’ He took his goal really well as he had a lot to do.”

Galway created a few chances in their search for the equaliser but failed to find the target while in the 90th minute O’Sullivan could have grabbed a second goal but was denied by a Gleeson save.

It was a great start to the new season for Longford Town who can now look forward to the visit of Shelbourne to City Calling Stadium on Saturday night next.