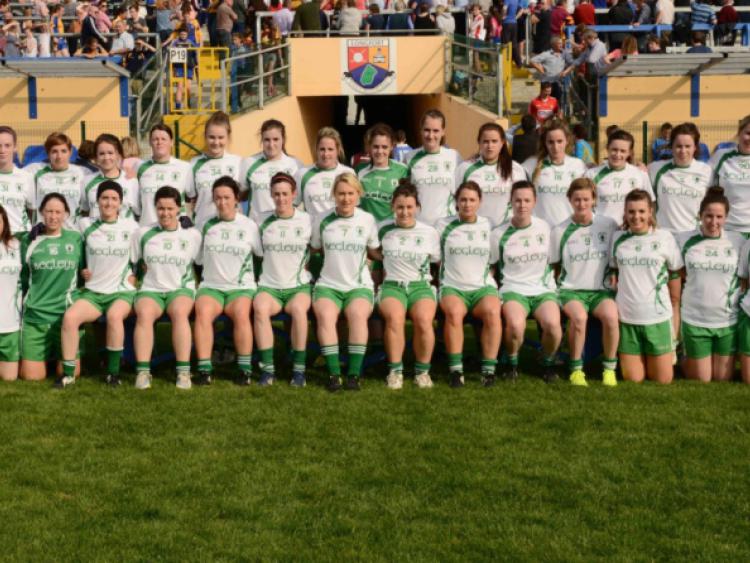 Killoe ladies were once again crowned county senior champions and in doing so completed a magnificent five-in-a-row after getting the better of Ballymore in the final at Glennon Brothers Pearse Park on Saturday last.

Killoe ladies were once again crowned county senior champions and in doing so completed a magnificent five-in-a-row after getting the better of Ballymore in the final at Glennon Brothers Pearse Park on Saturday last.

Ballymore will feel this is the one that got away from them because they had chances to cause an upset but took the wrong options on a number of occasions and some of their passing was wayward. Killoe had several experienced players to call upon when they needed it and their substitutes bench played its part such was the greater strength of their squad.

Killoe made a terrific start and were 1-3 to 0-0 in front with just three minutes gone but Ballymore gradually recovered from that terrible start to get back into the game. The side were level in the 17th minute but Killoe regained the upper hand before the break.

Ballymore tried hard to salvage the situation and in the final 10 minutes really piled on the pressure but Killoe keeper Dervla Murphy did well on a few occasions and the title holders also defended well.

Straight from the throw-in Killoe got their opening point when Sharon Treacy fired the ball over the bar. Seconds later they got a goal through Sabrina ‘Beany’ Hackett and Edel Quinn followed up with points to put her side ahead by six.

Fiona Blessington-Gettings got Ballymore’s opening score before Hackett replied with a good point for Killoe in the sixth minute. But that was to be their last score for 12 minutes as Ballymore began to get into the game. Blessington-Gettings hit over another point in the 13th minute and one minute later Emer Heaney found the back of the net to leave just one between the sides.

In the 17th minute Emer Heaney levelled the game but Killoe came storming back. After Ann Marie Bratten’s shot came off the post. Sabrina Hackett fired over a free in the 18th minute to put her side ahead again and then Alison Kenny got Killoe’s second goal.

Frees from Fiona Blessington-Gettings and Aisling Reynolds cut the gap to two by the 22nd minute but Killoe ended the first half well to register a further 1-1, Alison Kenny with a second goal, to lead by 3-6 to 1-6 at the break.

Two minutes into the second half, Emer Heaney hit over a free for Ballymore before Sharon Treacy shot a point for Killoe. Sabrina Hackett then brought a fine save out of Ballymore keeper Mary Kiernan.

Points from Elaine Reilly and Heaney (free) either side of a Hackett free put five between them by the 46th minute. Ballymore then enjoyed possession but went for goals instead of points with Killoe keeper Dervla Murphy producing a good save to deny Emer Heaney a second goal.

Ballymore cut the gap to four in the 54th minute but try as they might they could not get any more scores with a point from Anna McDonnell in stoppage time sealing a great win for Killoe.