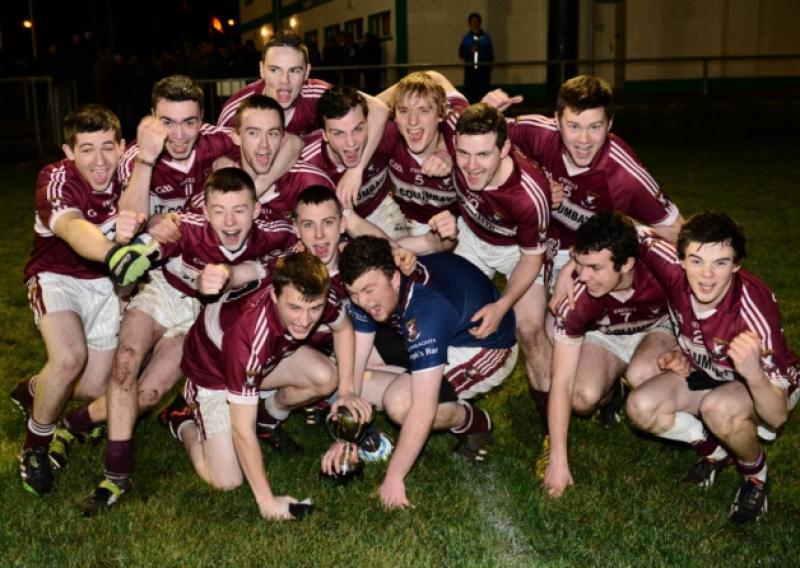 St Columba’s claimed their 4th U-21 ‘B’ title in five years on Saturday night when they deservedly defeated Clonguish in an entertaining final at Killoe.

St Columba’s claimed their 4th U-21 ‘B’ title in five years on Saturday night when they deservedly defeated Clonguish in an entertaining final at Killoe.

It has been a terrific week for the Mullinalaghta club as they claimed the Leader Cup the previous Sunday. For a lot of their players it has been a memorable twelve months; All-Ireland Schools winners, Minor, Leader Cup and now U21 B Champions. They’ll be hoping to end the year on a real high next weekend when they take on Longford Slashers in the Division 1 play-off final.

There were some excellent performances on the winning side; Luke Meehan, James McGivney and the lively Rian Brady all played well but it was David McGivney who was a worthy recipient of the man of the match award; the young midfielder was immense throughout at both ends of the field.

It was a foul on McGivney’s older brother James that led to the game’s opening score in the 2nd minute; Rian Brady pointed the free.

Clonguish responded in fantastic fashion; Alan Gregg played the ball to Christopher Gordon and he found the back of the net. Columba’s created two goal chances shortly after but first Brady and then James McGivney failed the find the target and put their efforts wide.

The next score didn’t come until the 12th minute; a free from Eoin Keane after Darragh McLoughlin was fouled.

A great point from James McGivney was followed up by a Brady point to cut the gap to just one point in the 16th minute. Keane was on target again one minute later with a fine point. Columba’s finished the half well and frees from David McGivney and Brady either side of a neat James McGivney point gave them a one point lead going in at the break.

One minute into the second half Columba’s had a great chance to grab a goal but Aidan McElligott’s fisted effort just went wide. Their next score came in the 36th minute when David McGivney pointed a free after Brady was fouled. He then followed up with an excellent point from play to put three between the sides.

Both sides were then reduced to 12 players in the 41st minute when an umpire spotted an off the ball incident; Columba’s forward Aaron Earley received a second yellow while Clonguish’s Darren Sheridan was shown a straight red.

Alan Gregg got a much needed point for his side in the 45th minute but Columba’s stretched their lead to five points one minute later when Brady fired an excellent low shot past Clonguish keeper Conor Devlin.

Two frees from Gregg put three between them in the 56th minute. They went in search of a goal but Gordon fired his low shot over the bar.

A great catch by McElligott led to him being fouled in the 60th minute and Brady duly pointed the free. It was the final score of the game as Columba’s claimed another memorable win.