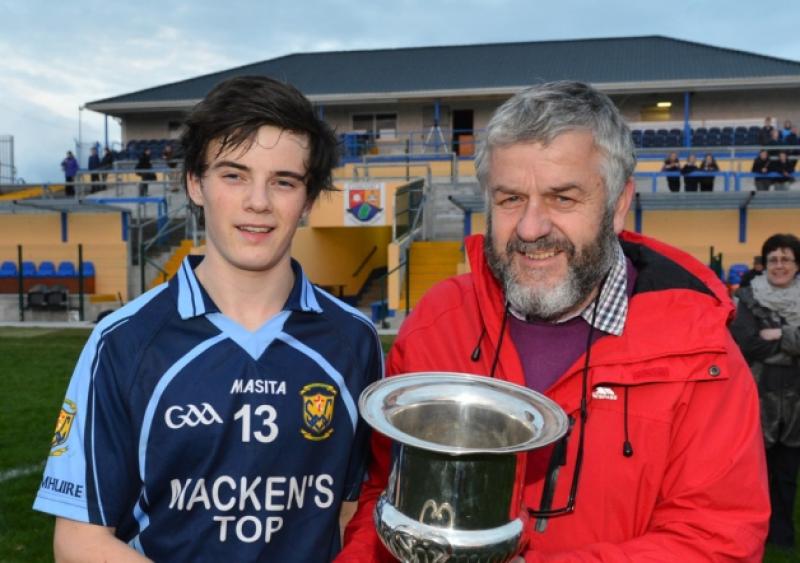 Cnoc Mhuire, Granard have enjoyed a lot of success in recent years and yet another title was won when they got the better of St. Mel’s College in the Fr. McGee Cup Final at Glennon Brothers Pearse Park on Friday evening last.

Cnoc Mhuire, Granard have enjoyed a lot of success in recent years and yet another title was won when they got the better of St. Mel’s College in the Fr. McGee Cup Final at Glennon Brothers Pearse Park on Friday evening last.

There was little separating the sides in this entertaining Longford Post-Primary Schools Senior ‘A’ Football Final until Cnoc Mhuire got what proved to be a decisive goal with nine minutes gone in the second half.

St. Mel’s were trailing by just a single point (0-12 to 1-8) at that stage but their hopes were shattered when the alert Aaron Brady planted the ball in the back of the net after a Rian Brady free came back off the upright. From there until the finish Cnoc Mhuire consolidated their tight grip on the game and were worthy winners of the county title.

Thanks to a Larry Moran goal in the 25th minute, St. Mel’s ended up leading by a point at the break (1-6 to 0-8) and could have been in a better position but for a couple of fine saves by the opposing keeper Gary Carroll. Having said that, Mark Kiernan was unlucky not to score a goal when he hit the post midway through the first half and the Cnoc Mhuire full-forward was a constant threat in clocking up a total of five points (two frees).

The Granard school made a great start to the second half in gradually getting on top with points from Conor Mallon, the impressive Nigel Rabbitte and Aaron Brady (2) putting them in front while Larry Moran and Eimhin Glacken (a great strike) replied for St. Mel’s.

But from the moment Cnoc Mhuire got the crucial goal St. Mel’s were fighting a losing battle and the sides shared a further nine points with Nigel Rabbitte (2), Jayson Matthews, Rian Brady (free) and Mark Kiernan (free) on target for the winners while Niall Kelly and Liam Hughes (three frees) got the scores for the Longford College who missed a couple of goal chances in a late rally.