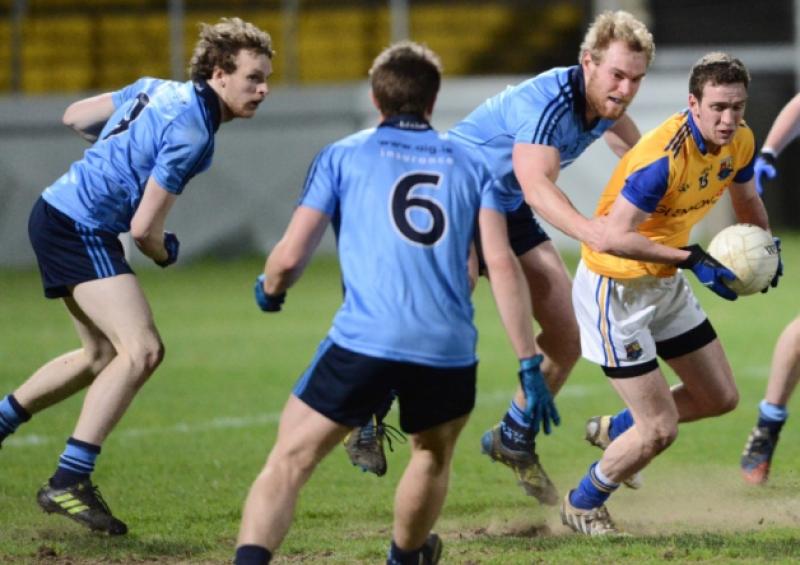 A gutsy Longford performance wasn’t enough to prevent the Dublin juggernaut from marching on in the EirGrid Leinster U-21 Football Championship this evening at Páirc Tailteann, Navan.

The sides were deadlocked on five separate occasions during an absorbing provincial semi-final battle.

However, the reigning Leinster and All-Ireland champions showed their power and class by registering the last six points of the match without reply to march on to the final where they will face Kildare on Thursday, April 2. The Lilywhites defeated Meath by 2-15 to 0-13 in the other penultimate round tie played this evening.

Longford’s deadly attacking duo of Liam Connerton and Larry Moran smashed home three goals between them as they tormented the Dubs rearguard but the problem for Frank McNamee’s charges was that they simply couldn’t get enough ball into their twin-pronged threat.

Dublin were physically strong around the central diamond thanks to the industry of Stephen Cunningham, Shane Carthy and Eric Lowndes and they dominated the aerial exchanges and won a very high percentage of all kick outs.

The match was played at rip roaring pace and unfortunately, in the final quarter, Longford couldn’t cope with the greater experience and power of Dessie Farrell’s Dubs who are going to be very difficult stopped in their bid to retain their Leinster and All-Ireland titles.

In this third U-21 championship meeting between the counties in as many years (Longford defeated Dublin by 1-6 to 1-5 in the 2013 quarter-final at Parnell Park, while last year in the semi-final at O’Moore Park, Portlaoise it was Dublin that triumphed 3-7 to 0-6), Longford got off to a dream start as Larry Moran blasted home a goal within ninety seconds of the throw-in. Intent on not letting Longford out of sight, Dublin struck back with an 8th minute Killian O’Gara (younger brother of Eoghan) goal.

The sides were tied at 1-1 apiece and Dublin were guilty of some wayward shooting and dropping shots short, before Liam Connerton fired home Longford’s second goal in the 13th minute, 2-1 to 1-1. Three points by Dublin full forward Conor McHugh, who scored 1-6 in last year’s All-Ireland Final win over Roscommon, saw his side draw level for the second occasion, 2-1 to 1-4.

Moran regained the lead for Longford with a converted free and they were hit by a sucker punch as Colm Basquel plundered for Dublin’s second goal and they went on to lead at the interval by the minimum margin, 2-5 to 2-4.

Having watched their team overcome Wicklow (4-13 to 1-5) and Louth (1-17 to 1-4) in the previous rounds, Longford supporters were thrilled with the supreme effort of their players and they rose to their feet, giving them a standing ovation as they trooped off into the dressing room for half-time.

Just as they did in the 1st half, Longford exploded from the traps on the resumption and that man Connerton left the twine bulging, 3-4 to 2-5. The Dubs, with the bit between their teeth, replied with four points in succession through Basquel, McHugh (2) and Andrew Foley, 3-4 to 2-9, with 39 minutes elapsed. It was gripping stuff and the crowd were loving every minute of it.

As Dubs took a breather, Longford capitalised and a hat-trick of points without reply from Paddy Kiernan, sub David McGivney (free) and Dessie Reynolds saw them surge a point clear again, 3-7 to 2-9.

As Longford dared to dream of a possible third Leinster U-21 Final appearance in five years, the slick and well-oiled Dublin machine stepped up through the gears menacingly. And over the concluding fifteen minutes the young Dubs kicked six unanswered points courtesy of McHugh, Eric Lowndes (2) and Niall Scully (3), giving them a five-point victory in the end, 3-7 to 2-15. So just as they did during their 2-21 to 2-10 quarter-final win over Laois, the Dubs produced their most potent football as the game drifted into its dying embers.

Longford had poured so much energy and commitment into keeping their vaunted opponents at bay over the opening 45 minutes that when they went looking for more in those critical minutes they painfully discovered the tank was empty.

Longford certainly have nothing to be ashamed of. They contributed enormously to a thrilling battle and there are many positives for them to dwell on.

Indeed, Larry Moran and Liam Connerton who notched up 2-12 and 4-5, respectively, over the course of this three-match U-21 campaign showed that they are quality players and they are capable making the step up to the senior fold where they will be a big addition.