County have one last chance 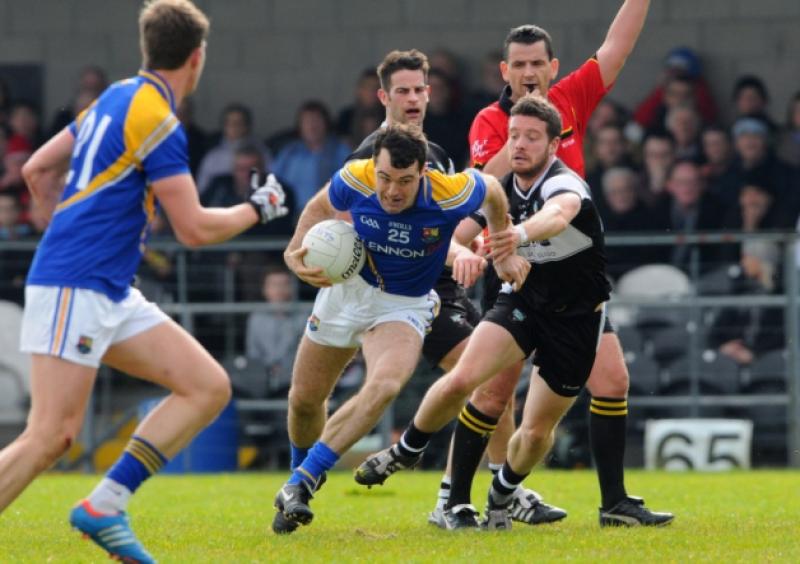 Despite suffering their fourth defeat in the current National Football League campaign when going down to Sligo by a solitary point at Markiezicz Park on Sunday last, Longford will have one last chance to avoid relegation from Division 3.

Despite suffering their fourth defeat in the current National Football League campaign when going down to Sligo by a solitary point at Markiezicz Park on Sunday last, Longford will have one last chance to avoid relegation from Division 3.

It’s a straight shoot-out between Jack Sheedy’s side and Wexford on Sunday next in Wexford to determine who makes the dreaded drop into Division 4 next season along with Offaly as the results last weekend means that Fermanagh, Sligo and Limerick are now safe.

Because of their superior scores difference, a draw will be good enough to keep Longford up and they are currently deadlocked with Wexford on four points apiece in the league table. A very tense situation, to say the least, and a tough task for the midlanders in a difficult away fixture.

After producing a poor first half performance against Sligo on Sunday last and ended up trailing by six points at the break, 0-10 to 1-1, Longford improved considerably on the changeover and could have got something out of the game in the finish as they gradually closed the gap.

Indeed, were it not for a few very harsh decisions by Donegal referee Shaun McLoughlin that went against them in the second half, Longford might have snatched at least a draw and substitute Paul Barden should have been awarded a free in his attempt to break through in the 62nd minute.

But the referee ignored the blatant foul with Barden forced to leave the pitch for a couple of minutes after sustaining a blood injury to his face and when the same player was impeded again in stoppage time there was no whistle either.

Rough justice, to say the least, but over the 70 minutes plus Sligo were the better side and they would have been in a more commanding position at the break but for shooting eight wides in the first half.

Longford, after all, got off to a great start to score a goal with less than a minute gone on the clock. A high ball in from Brian Farrell was dropped by Sligo keeper Aidan Devaney and Sean McCormack reacted quickly to find the back of the net.

But the home county then took over completely through their dominance in the half-back-line and at centrefield and proceeded to fire over eight points without reply before Longford got their only other score in the first half when wing back Shane Mulligan surged forward to shoot over the bar.

Sligo’s ten points came from Adrian Marren (3), Mark Breheny (3), Niall Murphy (2), James Kicullen and Keelan Cawley but they had a very lucky escape deep into first half stoppage time when Longford went close to scoring a second goal - Cian Mimnagh having a point blank shot saved by the opposing keeper.

Forced to field without Brian Kavanagh (injured) and Barry Gilleran (flu), there appeared to be no way back for a Longford side with no shape and no gameplan and who were struggling to remain in contention. And it was very surprising that not one U-21 player was called upon by Jack Sheedy to feature in such an important fixture, much to the anger of the loyal away supporters in Markievicz Park on Sunday last.

But with the advantage of the wind in the second half, the visitors eventually got their act together even though things could have got worse when Sligo corner-forward Adrian Marren blasted the ball over the bar when a goal was there for the taking with three minutes gone on the changeover.

The Longford comeback began to materialise thereafter as they fired over four points in a row through Sean McCormack (two frees), Brian Farrell (a fine strike) and Aidan Rowan in the space of six minutes before Sligo responded with a score from Eoin McHugh.

McHugh shot over the bar in his attempt to find the back of the net in the 47th minute and moments later another Longford goal materialised when Michael Quinn set up fellow Killoe clubman Mark Hughes, who was left with the relatively simple task of hitting the target from a few yards out.

All of a sudden just a single point separated the sides, 0-12 to 2-5, and while the pressure was eased on Sligo with a point from Mark Breheny in the 54th minute, two costly Longford wides followed from Sean McCormack (free) and Michael Quinn.

Sligo went on to increase their lead with a point apiece in quick succession from their chief marksman Marren and substitute Johnny Martyn but it was Longford who finished the stronger in a determined bid to get a result.

Following a brace of frees converted by Sean McCormack, the same player then dropped a shot short into the arms of the Sligo keeper before Paul Barden landed a great point from a tight angle in the final minute of normal time.

Sligo were hanging on by the minimum of margins but Longford were unable to engineer the equalising score and will head to Wexford on Sunday next in the hope of securing survival in Division 3 of the National League.