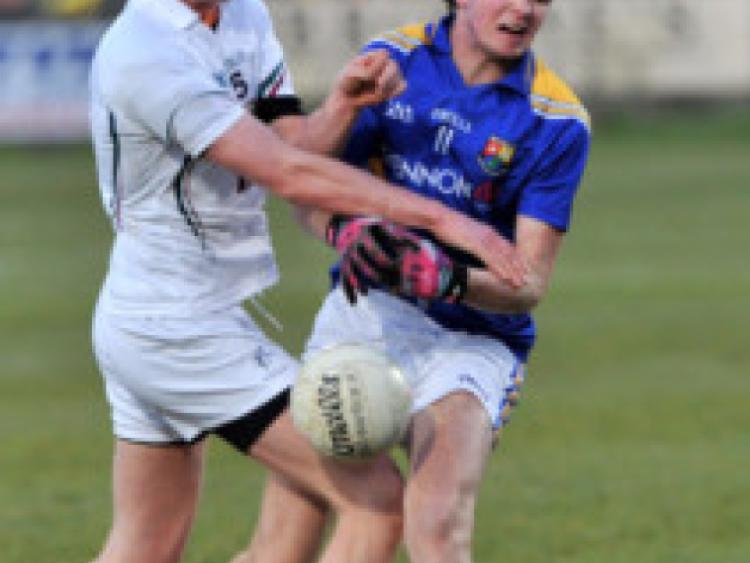 While Longford failed in their quest to achieve that elusive first Leinster U-21 Football Championship title triumph and have now lost all seven finals they have contested in this so competitive grade, the current squad certainly gave it their best shot in a very determined bid to spring a shock against the hot favourites Kildare at O’Moore Park in Portlaoise on Wednesday evening of last week.

Mainly due to their supremacy in the midfield battle with powerful No. 9 Sean Hurley producing a classy man-of-the-match performance, Kildare were unquestionably the stronger side and held a commanding eight points lead at one stage of the second half with a goal from a penalty converted by corner-forward Paddy Brophy eventually proving to be the decisive matchwinning score in this entertaining provincial decider watched by the official attendance of 5,759.

Trailing by 0-9 to 0-5 at the break, Longford suffered a serious setback with less than a minute gone on the changeover when the towering figure of Hurley was impeded as he burst his way through the opposing defence and referee Brian O’Shea awarded a penalty that was duly dispatched to the back of the net by Brophy.

Moments later the other Kildare corner-forward Padraig Fogarty shot over the bar to leave Longford facing a real uphill task but the underdogs went down fighting in a brave battle and there was a lot to admire about the usual never-say-die spirit they displayed in plugging it out to the bitter end.

Kildare are still seven points clear when their other strong midfielder Thomas Moolick (whose father PJ is a former Clonguish player) landed a well struck long range effort in the 12th minute of the second half but Kieran McGeeney’s talented team failed to register another score as Longford showed a lot of character in their fierce desire to gradually close the gap.

Most other teams would have collapsed after being under so much pressure but Longford, inspired by outstanding centre-half-back Padraig McCormack, dug deep in the hope of salvaging the situation. Both sides were guilty of squandering quite a few scoring chances during the course of the game and after Barry McKeon fired over a close range free in the 50th minute, Longford had a glorious opportunity of getting the goal they so badly needed.

James McGivney played the ball through to Mark Hughes right in front of the posts and the impressive full-forward, after rounding the opposing keeper Mark Donnellan, looked destined to hit the back of the net from point-blank range in the 52nd minute. But Hughes was denied by a last ditch tackle by Kildare defender Paul Cribben who deflected the ball wide much to the sheer dismay of the large contingent of Longford supporters in O’Moore Park.

It proved to be a pivotal moment in the match and while the resulting ‘45’ taken by goalkeeper Paddy Collum ended up with Darren Gallagher flicking the ball over the bar this was a very lucky escape for Kildare who were beginning to panic .

The force was with Longford when Daniel Mimnagh shot over the bar in the 54th minute but the gathering momentum was unfortunately broken just after that score when Robbie Smyth sustained a serious shoulder injury and the final was held up for five minutes before the Abbeylara attacker was stretchered off the pitch.

Dublin referee Brian O’Shea, who did not do Longford any harm in his general decision making throughout the game, added on the same amount of time and just one more score materialised in the additional period when James McGivney landed a long range strike to leave just the goal separating the sides.

There was still two minutes left to play but Longford were unable to engineer another chance as Kildare kept their composure in maintaining possession and ran down the clock to clinch their 10th Leinster U-21 title which was well deserved.

Having said that, the little bit of luck that is always needed did not favour Longford on this occasion and apart from the Mark Hughes chance late in the second half his fellow Killoe clubman Paddy Thompson also went so close to scoring a goal when his shot came back off the post with 13 minutes gone in the game.

At that stage Kildare were in a comfortable 0-5 to 0-1 lead and could have been even further ahead as moments before the Thompson chance they had a great opportunity to score a goal, But Longford keeper Paddy Collum came to the rescue when doing well to save a point-blank shot from No. 15 Padraig Fogarty who was a constant threat – as were No. 13 Paddy Brophy and No. 11 Niall Kelly, the latter operating effectively in a roving forward role.

Fogarty, Brophy and Kelly inflicted a lot of the damage in scoring 1-7 between them and the penalty scorer Brophy was denied the chance of a second goal with ten minutes of normal time remaining when he had only opposing keeper Collum to beat after receiving a pass from Hugh Mahon. But substitute Mahon appeared to be very harshly penalised for overplaying the ball by the referee with Kildare leading by 1-12 to 0-8 at that stage and another goal would have left Longford dead and buried.

Sean Hurley got the opening score of the game when converting a brilliantly struck ‘45’ in the 2nd minute and while Mark Hughes (free) replied for Longford, the pressure was subsequently piled on by a rampant Kildare side who fired over four fine points in a row through Niall Kelly, Hurley, Fionn Dowling and Padraig Fogarty to open up a gap after ten minutes of play.

While Longford hit back with a couple of scores from frees converted by Mark Hughes (14 mins) and Robbie Smyth (17 mins), Kildare regained the upper hand with a point apiece from Paddy Brophy and Fionn Dowling, the latter on target from a tight angle in the 21st minute.

Mark Hughes kept Longford in touch when landing a well struck point and further scores were exchanged between Brophy and Hughes (the dangerous Killoe forward cutting in from the left to fire over a cracking point in the 26th minute) before a mistake by Paddy Collum was punished and resulted in Kildare’s ninth point of the game through Niall Kelly moments later.

That was the way it remained until the half-time whistle was blown but Longford were left to rue a couple of costly missed chances just before the break as a Mark Hughes free dropped short while Robbie Smyth was unlucky when his shot for a point came back off the upright.

As already mentioned, Kildare made a great start to the second half in adding a goal and a point to their tally to establish a commanding 1-10 to 0-5 advantage but Longford found a new lease of life that yielded three points in the space of five minutes through Mark Hughes (free), Darren Gallagher and Robbie Smyth.

In between, Niall Kelly was on target again for Kildare and then the prominent Robbie Smyth (who was always a threat when he received the ball) had a shot waved wide – a disputed decision when it looked like his kick had gone over the bar. Kildare captain Thomas Moolick steadied the Kildare ship when kicking a fine point in the 42nd minute to leave his side 1-12 to 0-8 ahead but Longford had the better of the exchanges from there until the finish.

Four points without reply closed the gap but this determined late rally was not enough to change the course of the game and Longford were left to reflect on what might have been as Kildare emerged worthy winners in advancing to meet the Connacht champions Galway in the All-Ireland U-21 semi-final on Saturday week, April 20th.