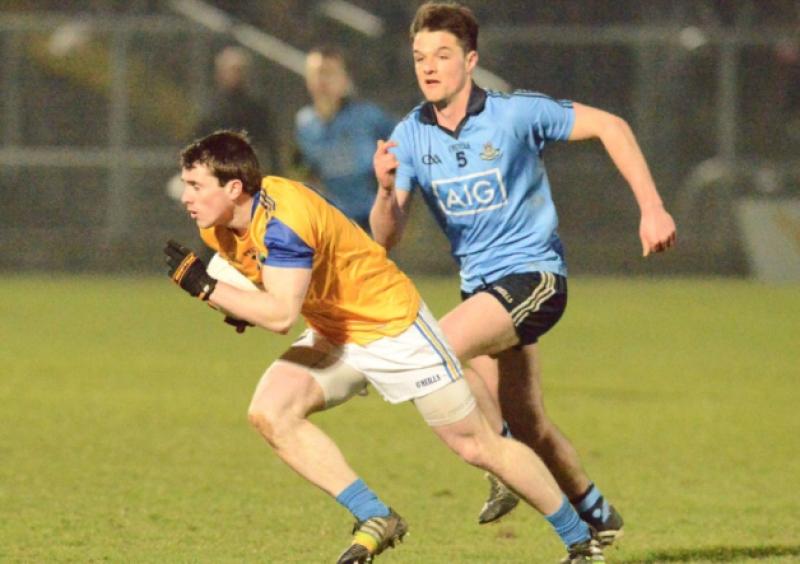 In a very brave bid to reach the Leinster U-21 Football Championship title decider for the third time in five years, Longford really put it up to the red-hot favourites Dublin in a thrilling semi-final clash at Pairc Tailteann, Navan on Wednesday night of last week.

In a very brave bid to reach the Leinster U-21 Football Championship title decider for the third time in five years, Longford really put it up to the red-hot favourites Dublin in a thrilling semi-final clash at Pairc Tailteann, Navan on Wednesday night of last week.

Goals at crucial stages of this most entertaining encounter kept the highly charged midlanders bang in contention as they rattled the reigning All-Ireland champions and for a spell in the second half it looked like Dublin were in trouble.

Liam Connerton had raced through to fire home Longford’s third goal with a couple of minutes gone on the changeover, only for Dessie Farrell’s charges to come storming back with four points in a row through Colm Basquel, Conor McHugh (2) and Andrew Foley in quick succession.

But Longford then took over completely in a dominant period that yielded three more scores, the first of which was a cracking long strike from Paddy Kiernan and then substitute David McGivney converted a free to leave the sides all square.

But just before that Larry Moran failed to convert a free which cast some doubt in the minds of the Longford players as to whether they had the belief to spring a sensational shock. At least three other good scoring chances were squandered in a spell when Dublin were reeling on the ropes and the underdogs kicked a total of seven costly wides in the second half.

Powerful right-half-back Eric Lowndes then landed a long range point to put the champions back in front and Longford had a real lucky escape when Robbie Gaughan just failed to get the vital touch to a McHugh pass across the face of the goalmouth in the 51st minute.

The Dublin machine was now clicking into top gear in driving on for their eventual victory with influential wing forward Niall Scully shooting three scores in a row before Lowndes brought the scoring to a close with a fisted point in the 56th minute.

Game, set and match to Dublin who went close to getting another goal in a very strong finish, only for a vital interception by Longford defender Conor Shields, and the Longford bravehearts were certainly gallant in defeat.

As was feared, Longford failed to make the desired impact at midfield where the physically stronger Dublin side had a definite edge for most of the match and thus the supply of the ball into the deadly duo of Larry Moran and Liam Connerton was cut short.

Moran (1-2) and Connerton (2-0) caused havoc whenever they were in possession, with their electric pace posing serious problems for a suspect Dublin full-back-line, and the excellent inside forwards almost propelled Longford to a famous victory.

Senior status surely beckons for this promising pair but great credit must be given to the entire squad for working so hard to get the county this far in the Leinster U-21 Championship.

To run Dublin close was a truly terrific performance and deserved praise also to manager Francis McNamee and his fellow mentors Ciaran Fox, Gareth Johnston and Karl Dermody for a job well done.

The Longford supporters who comprised the bulk of the estimated 1,500 attendance in Navan really got behind the team and the worthy standing ovation they gave to the U-21 team as they headed for the dressingroom at half-time was a joy to behold.

Despite Dublin enjoying the much greater share of the possession, Longford only trailed by a point at the break (2-5 to 2-4) and it was a riveting roller-coaster ride that kept on going.

A dream start for the 8/1 outsiders (Dublin were 1/12 to win the match) saw Larry Moran cut in from the right on one of his trademark penetrating runs through the opposing defence before dispatching the ball to the net with just over a minute gone on the clock.

In fact, it could have got even better had Paddy Kiernan not lost the ball when there was a good chance of another goal. But Dublin soon settled down and a goal and a point from Killian O’Gara (brother of senior star Eoghan) in a short space of time left the sides all square after 9 minutes.

Back came Longford to hit the front again with a marvellous goal from the boot of Liam Connerton in the 13th minute, receiving the ball from Rory Connor who had capitalised on a poor clearance by the opposing keeper Lorcan Molloy.

But Dublin continued to win a lot of the ball around the middle of the field and a sustained period of pressure yielded three points (one free) in a row from chief marksman Conor McHugh, who along with Killian O’Gara and Colm Basquel were creating serious problems for the Longford full-back-line.

McNamee’s side were doing their best to keep the opposing attack at bay in operating the blanket defence system and while Larry Moran fired over a free in the 21st minute to regain the lead for Longford, Dublin struck to score a second goal in the 22nd minute.

Slack marking allowed Colm Basquel to finish the ball to the back of the net from close range to leave his side 2-4 to 2-2 ahead but there was no stopping Larry Moran as he evaded the challenge of no less than three Dublin players to land a magnificent point in the 24th minute.

Moments later Killian O’Gara fired over another score for Dublin as the ding-dong battle continued and the non-stop action soon switched to the other end of the pitch as Andrew Dalton shot over the bar for a great score.

Then came one of a few harsh decisions that went against Longford during the course of the game as Liam Connerton was blatantly fouled but no free was awarded by Carlow referee John Hickey.

But looking at the overall picture, Longford were beaten by a better-balanced Dublin team who were on top in most of the positions. But the city slickers were guilty of some very poor finishing during the course of the game - particularly in the first half when they shot eight wides as compared to just two for the opposition.

And when you also take into account that the winners landed four or five efforts into the arms of Longford keeper Colm Farrell in the first half, there was no doubting Dublin’s overall superiority - clearly reflected in their total of 17 scores to Longford’s 10.

Although they outscored Longford 0-10 to 1-3 on the changeover, the young Dubs were made work very hard for their eventual victory in advancing to meet Kildare in the Leinster U-21 Final on Thursday April 2nd.