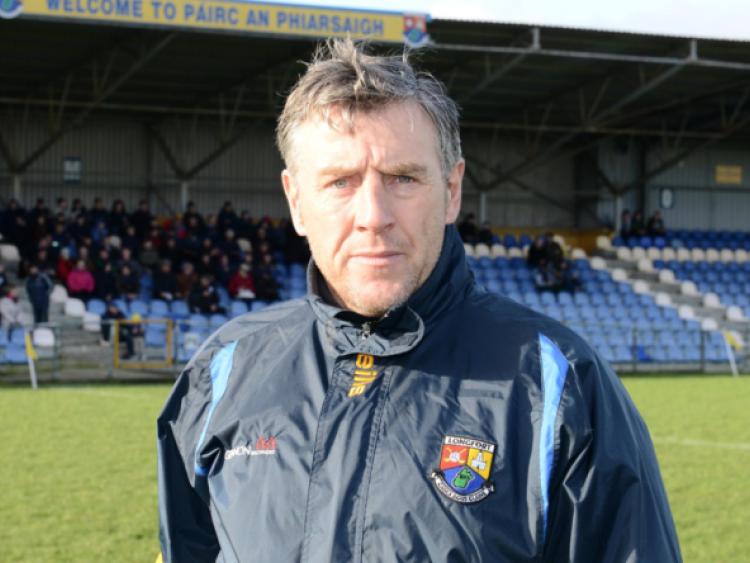 After losing a large number of players from last year’s Under 21 squad, new Longford manager Jack Sheedy is under no illusions as to how tough things will be against Westmeath in the first round of the floodlit Leinster Under 21 Football Championship at Pairc Ciaran, Newtowncashel on Wednesday night next (February 19), throw-in 7.30pm.

After losing a large number of players from last year’s Under 21 squad, new Longford manager Jack Sheedy is under no illusions as to how tough things will be against Westmeath in the first round of the floodlit Leinster Under 21 Football Championship at Pairc Ciaran, Newtowncashel on Wednesday night next (February 19), throw-in 7.30pm.

And Sheedy is set to suffer a significant setback in his quest to guide the county U-21s into a quarter-final confrontation away to Laois or Wicklow as Carrickedmond clubman Barry O’Farrell, the full-back on the team that lost to Kildare in last year’s final, is struggling to recover from injury and he is considered extremely doubtful to play any part against Westmeath.

During their preparations for the championship, Longford lost all three Hastings Cup games against Mayo, Offaly and Cavan but Sheedy and his U-21 selectors Frank McNamee and Liam Belton saw a marked improvement in each performance and also in recent challenge matches which included a draw against Kerry.

“We are working with a relatively small squad in comparison to last year and we have a lot of guys who are just out of the minor grade stepping up to U-21 level this year. Losing a lot of lads from last year that were the backbone of the team does make it difficult. The experience that was there isn’t there now. But the lads that have come in from the minors plus the guys in the squad from last year are starting to gel really well and are working extremely hard. The performances have slowly been improving,” he told the Leader.

With plenty of new faces in the squad the Longford boss is looking to the ‘older and experienced’ players. Having said that, Sheedy has decided to bring in promising Mullinalaghta player David McGivney for the U-21 game against Westmeath. “I have brought in David McGivney from the minors but for the new players who came through from the minor ranks it is a big step-up. We have lost leaders and we are looking towards Robbie Smyth (Abbeylara), Barry McKeon (Colmcille) and James McGivney (Mullinalaghta). They would be the senior guys of that group and the most experienced.”

Sheedy is delighted with the work and effort that his players have put in and hopes they will get their reward: “There are some big shoes to fill from last year in terms of the personnel but the current squad have applied themselves really well in working hard in training. We are looking forward to the game and hopefully we can produce a performance good enough to beat Westmeath.”

The Longford manager has done his homework on the opposition and knows his side are facing a formidable task. “Our Seniors played Westmeath in a development squad match before Christmas and there were 11 Westmeath Under 21s on the panel and most of them are part of the senior squad now which is a significant factor. They have a lot of good footballers there and many have come through the minor ranks. Let us not forget that Westmeath reached the Leinster minor final last year.”

With the U-21 game in Newtowncashel, Sheedy is hoping that home advantage will count as Longford look to overcome their neighbouring rivals. “Having the game in Cashel is a help certainly. Big pitch, good facilities and it should be of some benefit to us. The home games are always an advantage and hopefully we can make that work in our favour.”

In his dual role of U-21/Senior manager he wants to transform football in general in Longford during his tenure. “What we want to do is to create a culture where the players that are coming through are subject to the best practice. I know a lot of good work is being done at underage level and it has to start early. Improve the standards as they go up through the age groups so that when they get to minor they will have an understanding of diet, strength and conditioning work and so on and it eases the transition when they come to play under 21 and then senior football.”