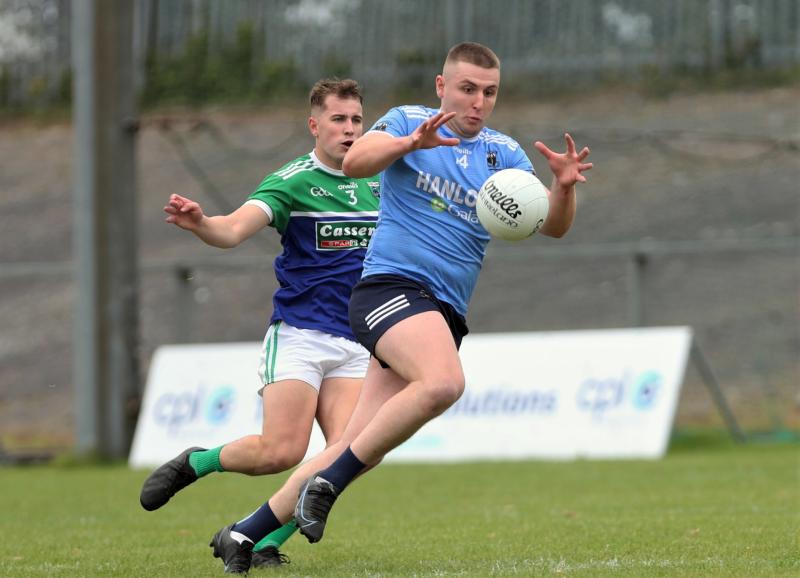 Daire O'Brien (who scored 2-5) on the ball for Slashers ahead of Rathcline defender Jakub Kajan. Action from the SFC quarter-final on Sunday evening Photo: Syl Healy

Longford Slashers were in a goal hungry mood in the quarter-final clash at Glennon Brothers Pearse Park on Sunday last as they scored a comprehensive win in knocking Rathcline out of the Senior Football Championship.

From the moment the towering Daire O’Brien, the most effective target man at full-forward, found the back of the net with seven minutes gone on the clock to leave his side 1-3 to 0-0 in front, the outcome was never really in any real doubt despite a determined comeback by the Lanesboro outfit in the closing stages of the first half.

Slashers ended up leading by 4-6 to 2-6 at the break with their other goals coming from Ruairi Clarke, Tadhg McNevin and Gerard Flynn while Bryn Peters and Oran Kenny (penalty) got the goals for Rathcline who sorely missed injured defenders David Rooney and James Carroll.

When Daire O’Brien scored his second goal with six minutes gone in the second half and who ended up scoring a total of 2-5, Slashers were back in complete control and there was further woe for Rathcline who conceded a sixth goal when substitute Cian O Nuallain shot to the net in the 40th minute.

Liam Keenan’s side (minus the injured Peter Lynn) ran out easy winners and the sky-blues now move on to meet Colmcille in the semi-final on Sunday evening next.