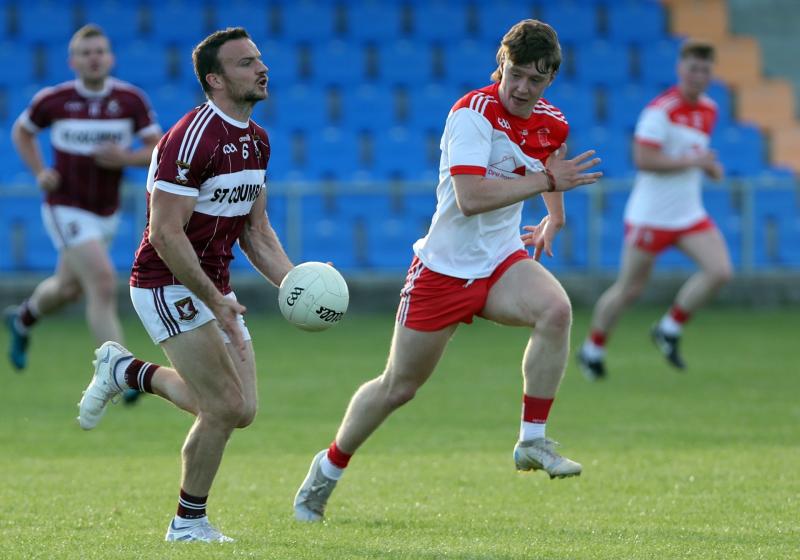 Donal McElligott on the ball for Mullinalaghta ahead of Abbeylara opponent Ciaran Scanlon. Action from the SFC quarter-final on Saturday evening Photo: Syl Healy

Mullinalaghta had to call on all their vast experience in producing a strong finish to score a narrow win over Abbeylara in this entertaining Senior Football Championship quarter-final at Glennon Brothers Pearse Park on Saturday evening last.

Just a solitary point separated the sides in the end as spirited Mullinalaghta showed a lot of spirit to survive after conceding a second goal in the closing stages of the game with Abbeylara defender PJ Masterson surging forward to flick the ball into the net.

The Masterson goal in the 55th minute (created by Cian Brady) left the underdogs leading by two points, 2-7 to 0-11, to leave St Columba’s on the brink of a shock championship exit but the title holders then showed their class to salvage the situation and clinch a semi-final spot.

Four fine points in quick succession through David McGivney (free), Cian Mackey, James McGivney and Rian Brady got Mullinalaghta over the line as Abbeylara were pipped at the post.

The other Abbeylara goal came from a penalty converted by Robbie Smyth in the 17th minute to leave them leading by the minimum of margins at the break (1-3 to 0-5) but St Columba’s gradually got their act together on the changeover in digging deep for a hard earned success.