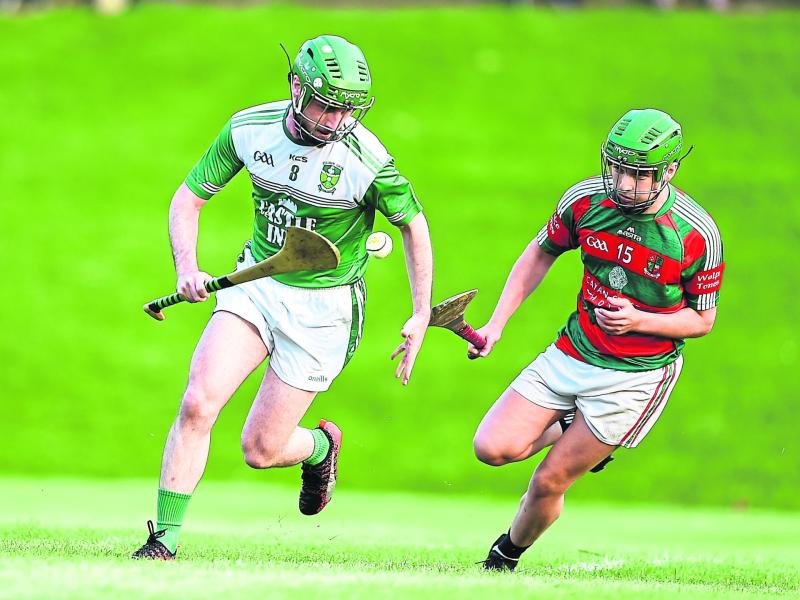 Paddy Corcoran pictured in action for Clonguish Gaels in his bid to evade the challenge of Wolfe Tones opponent Iain Campbell in the SHC Round 3 game Photo: Ken Keenan

An incredible fifty metre sideline cut equaliser from Bart Hanley deep into stoppage time earned Clonguish the draw they needed against Wolfe Tones to book their place in the county senior hurling championship final against Longford Slashers on September 11.

Clonguish and Wolfe Tones finished all square at Michael Fay Park on Saturday evening last. As Clonguish had drawn with Slashers and Wolfe Tones had narrowly lost by a single point to Slashers, a draw was the required outcome for Clonguish while the Edgeworthstown side needed a victory to progress to the decider.

Clonguish were cruising with eleven minutes of normal time remaining as they were six points clear, leading by fourteen points to eight.

However, the Edgeworthstown outfit reeled off the next seven points to take a one point lead in the sixty-second minute, courtesy of Cathal Mullane's seventh point of the contest.

However, just as it looked like it would be enough to send them into the county final, Hanley's magnificent sideline cut put Clonguish into the Duignan Cup title decider instead.

Subs:- O'Hara for Quinn (half-time); Browne for O'Donoghue, Mulhern (0-1) for Joe Gaffney, McLoughlin for John Gaffney (all second half).