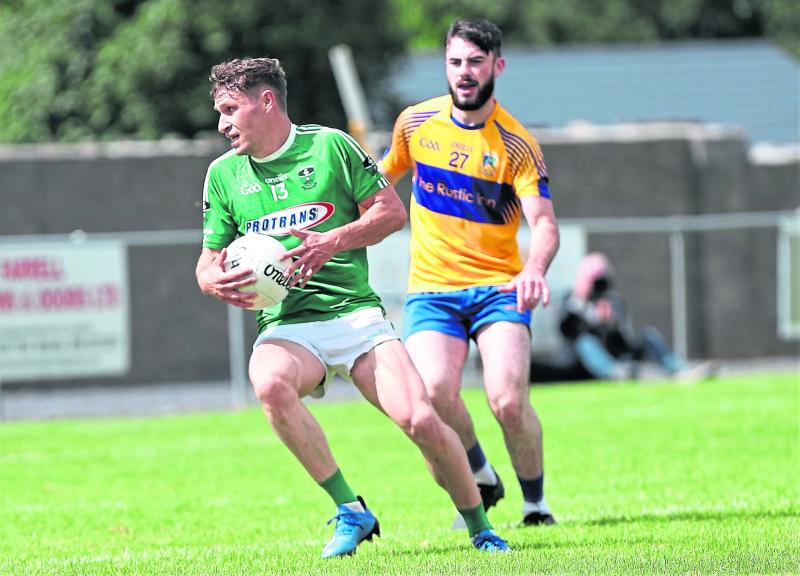 Chris Gordon on the ball for Clonguish ahead of Carrickedmond opponent Diarmuid Kelly. Action from the SFC Round 2 game on Sunday Photo: Syl Healy

Clonguish scored a convincing victory over a disappointing Carrickedmond side in the Senior Football Championship Round 2 clash at Keenan Park, Ardagh on Sunday last.

The return of County U-20 players Jack Duggan and Matthew Flynn to the starting team was key to the Clonguish victory while Chris Gordon and Josh Sorohan also figured prominently.

Carrickedmond dipped massively from their great win over Abbeylara in Round 1 and they never matched their opponents' level and couldn’t bridge the three point gap Chris Gordon’s early goal created.

Gordon netted directly from the throw-in, finishing off a penetrating  run of 70 yards with a great finish past the opposing keeper Garret Higgins.

Barry O’Farrell’s goal kept Carrickedmond ticking over in a struggling first half display. Josh Sorohan pointed immediately on the resumption of play to put Clonguish 6 ahead and his goal midway through the second half was the killer blow.

Carrick struggled to get a stranglehold at midfield throughout and they saw more misery from the restart when Sorohan latched on to a breaking ball in midfield and had a clear path all the way to the goal.

Clonguish failed to score after Sorohan’s goal and Carrick chipped the score line down through the hard work of Adam Quinn and Eoghan McCormack but ultimately never threatened to salvage the situation.