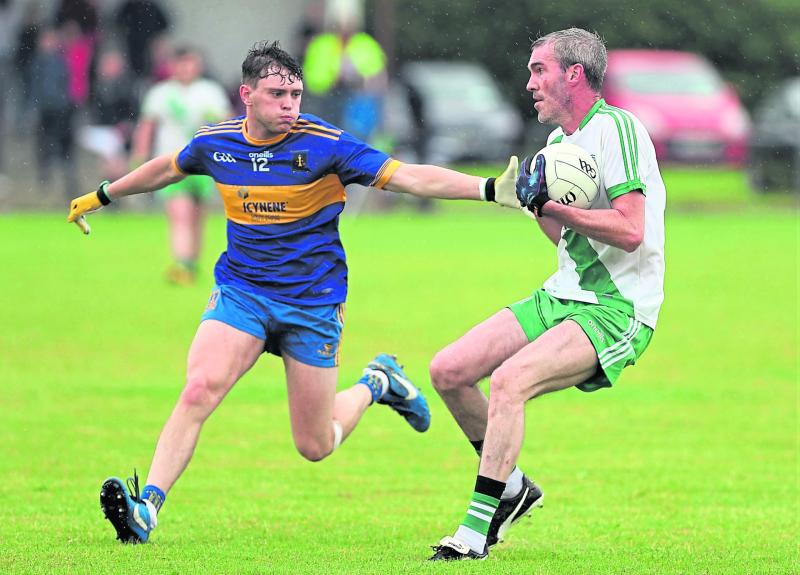 Enda McPartland pictured in action for Killashee in this tussle with Dromard opponent Fionn Hourican in the SFC Round 1 game on Saturday evening last Photo: Syl Healy

Dromard will have learned absolutely nothing from this landslide win as they crushed a seriously depleted Killashee team in the Senior Football Championship Round 1 game at C&D Devine Park on Saturday evening last.

It developed into a target practice session for Sean Hagan’s side against the club who created Longford GAA history by winning back-to-back intermediate Championship titles last year with the 2020 final delayed due to the Covid pandemic.

A lot has changed since that glorious period for the proud south Longford club with so many players missing for different reasons and St Brigid’s just about managed to field a team for the massacre in Mostrim.

Only 17 Killashee players were togged out for this demoralising experience and just six of those featured in the win over Ballymahon in last year’s Intermediate title decider - notably Killian Lee, Kealan Cox, Darren Cosgrove, Shane Cosgrove, Francie Dolan and James Willis.

St Brigid’s are also without a manager after former Leitrim All-Star Seamus Quinn quit the role recently in the fierce struggle to field a team this season.

The players who lined-out against Dromard deserve credit for doing their best in the face of adversity and St Brigid’s ended up trailing by 1-10 to 0-1 at the break with Joseph Hagan scoring a cracking goal from a tight angle in the 22nd minute.

The solitary Killashee score in the first half was a fine long range strike from midfielder James Willis while their two points on the changeover came from frees converted by Francie Dolan.

Francis McGee scored the three goals for Dromard in the second half while Ross McNerney also figured prominently in the full-forward-line in firing over a total of six points.

Subs:- Peadar Kiernan (0-1) and Luke McEntire for C McGauran and R Bleakley (both in the 41st minute).

St Brigid's Killashee have conceded the game against Longford Slashers in Round 2 of the Peter Hanley Motors Senior Football Championship, scheduled to be played in Newtowncashel this Friday evening, as they are unable to field a team - mainly due to a lot of injuries. Only 17 players were togged out for the first round match against Dromard last weekend.