No All-Ireland joy for Longford as Armagh emerge victorious 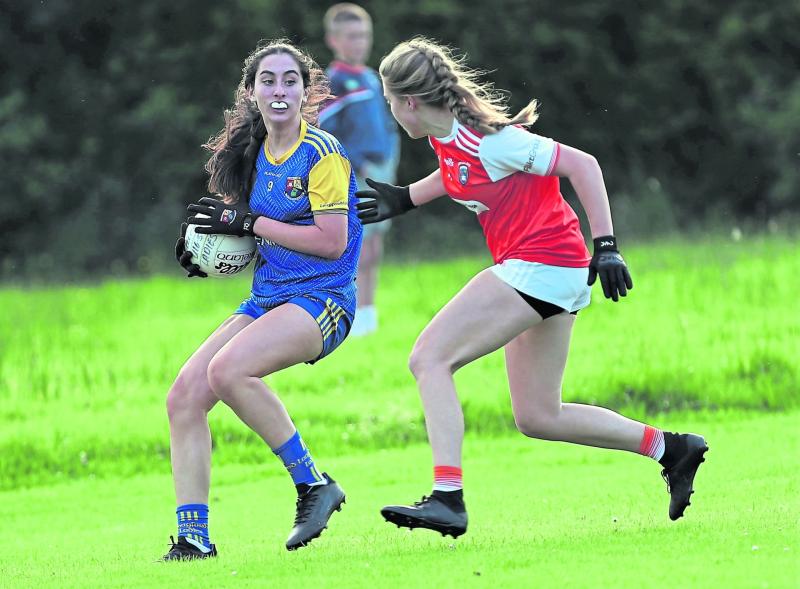 Eimear Igoe pictured in action for Longford against Armagh in the All-Ireland U-16 'C' Championship Final in Lisnaskea on Wednesday evening Photo: Syl Healy

Longford failed in their bid for All-Ireland glory in the Ladies Football U-16 ‘C’ Championship when they lost out to a physically stronger Armagh outfit in a frantic final at the Lisnaskea Emmetts GAA grounds on Wednesday evening.

The narrow margin of just two points (1-6 to 1-4) separated the sides at the break in the action packed end-to-end contest with Grace Cullen converting a penalty for the Longford goal in the 13th minute.

Clear-cut goal chances were created by both counties in a very exciting finish to the first half at the excellent Co Fermanagh venue with Armagh holding a slender lead.

The advantage was extended when impressive corner-forward Lucy Doyle (winner of the player of the match award after scoring a total of 1-5 from play) shot over the bar but Longford got back on level terms with a goal from Elena O’Reilly with nine minutes gone in the second half.

O’Reilly pounced on the breaking ball after the opposing keeper Siofra Doherty saved a shot from Maria Farley but that was as good as it got for Dermot Murphy’s team who failed to register another score during the remainder of the match.

Armagh fired over another seven points to emerge victorious and were unquestionably the better team with Longford unable to capitalise on the extra player advantage when the always dangerous attacker Doyle was sent to the sin-bin for the ten minute period after receiving a yellow card midway through the second half.