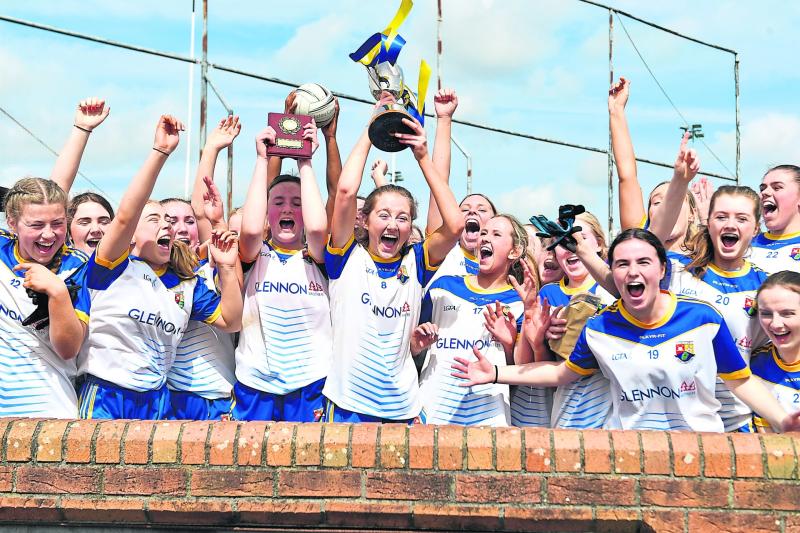 Sian Gallagher, captain of the Longford U-16 ladies football squad, lifting the Leinster 'C' Championship Cup amid jubilant scenes back in May Photo: Frank McGrath

These are exciting times for Longford ladies football following the fantastic win for the minors against Dublin in the Leinster Minor ‘B’ Championship Final last week.

The focus now switches to the County U-16 squad who take on Armagh in the All-Ireland ‘C’ Championship final at the Lisnaskea Emmetts GAA grounds, Co Fermanagh  this Wednesday evening, throw-in 7.30pm.

Dropping down from the ‘B’ grade in the provincial series after suffering defeats against Westmeath and Wexford,  resurgent Longford are making the most of their second chance in the ‘C’ competition.

While Dermot Murphy’s charges were hard pressed to overcome the difficult challenge of Offaly in the Leinster semi-final by the narrow margin of three points, the girls then scored a comfortable 1-12 to 1-3 win over Wicklow in the title decider.

Next up were neighbouring rivals Leitrim in the All-Ireland semi-final and there was just no stopping Longford at the Mullahoran grounds with the wide margin of 12 points separating the sides in the finish.

But they can expect a far tougher game against the Ulster ‘C’ champions Armagh who had five points to spare over Limerick in the other semi-final.

The Longford U-16 squad is packed with plenty of potential and leading the charge at centerfield will be the team captain Sian Gallagher (Ardagh) who is also a member of the successful minor team.

Gallagher will link up with Eimear Igoe (Killoe) in a fairly formidable midfield pairing and the well-balanced team will make a strong bid for All-Ireland glory.