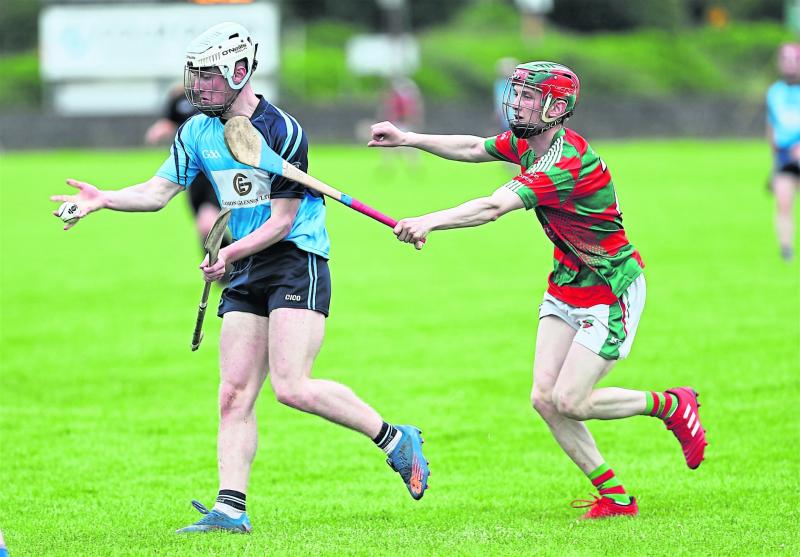 Longford Slashers overcame the handicap of playing almost the entire second half with 14 players in holding out for a slender win over Wolfe Tones in a highly entertaining Senior Hurling Championship group stage first round clash at Allen Park on Saturday evening last.

Longford Slashers overcame the handicap of playing almost the entire second half with 14 players in holding out for a slender win over Wolfe Tones in a highly entertaining Senior Hurling Championship group stage first round clash at Allen Park on Saturday evening last.

Former Kildare hurler David Harney was sent-off after receiving a second yellow card with a couple of minutes gone on the changeover but Slashers appeared to be in a strong position after building up a commanding advantage.

Reuben Murray clocked up the impressive total of 2-7 (seven frees) for the title holders with his second goal direct from a free in the 40th minute leaving his side in a ten point lead, 2-10 to 0-6.

But the spirited Edgeworthstown side, who shot several costly wides throughout the match, came storming back to close the gap to just the minimum of margins in a frantic finish with Daire Duggan flicking the ball to the net in stoppage time.

Time ran out for the gallant losers who will get another chance to reach the county final when they meet Clonguish Gaels in the middle of August with the Newtownforbes club in action against Slashers in the Round 2 fixture this Saturday evening.

Both sides were missing key players with Slashers forced to field without the injured Johnny Casey and the suspended Cian Kavanagh while Wolfe Tones were minus the services of injured trio Martin Coyle, Daniel Connell and Cian McLoughlin.

Slashers raced into a 0-5 to 0-1 lead with four of their points coming from Reuben Murray (three frees) while Matthew Hawes was also on target.

Wolfe Tones ended up trailing by 1-8 to 0-4 at the break with Ronan Courtney, Cathal Mullane (two frees) and Joseph Gaffney accounting for their scores.

Just a solitary point (0-5 to 0-4) separated the sides before Slashers got their first goal in the 21st minute. A long range free from David Buckley came back off the upright and Rueben Murray reacted quickly to flick the breaking ball to the net.

Three more scores followed from David Harney (2) and Murray (free) and the reigning champions added another 1-2 to their tally in the early stages of the second half.

The points were landed by the very prominent centre-half-back David Buckley (a terrific long range strike from play) and Reuben Murray (free) and when Murray then scored his second goal direct from a free, there appeared to be no way back for Wolfe Tones.

The wides continued to mount for the Mostrim side but they began to capitalise on the extra man advantage in piling on the pressure.

Wolfe Tones outscored Slashers 3-6 to 2-3 on the changeover with a brace of goals from Cathal Mullane (the first direct from a free) keeping their hopes alive.

Maitiu O’Donoghue fired over five points (three from frees along with a ‘65) while Evan Tully set off on a penetrating run on his way to scoring a brilliant point.

All Slashers could manage in the final quarter of this exciting contest was another free converted by Reuben Murray along with a third goal that got them across the line.

A dipping shot from Ronan Kenny was batted down by the Wolfe Tones keeper Andy Kelly and the alert Matthew Hawes got the vital touch to find the net in the 56th minute to clinch a hard earned victory for the Duignan Cup holders.