Longford Senior League: Colmcille come out on top in close contest against Killoe

All County Football League Division 1 - Round 9 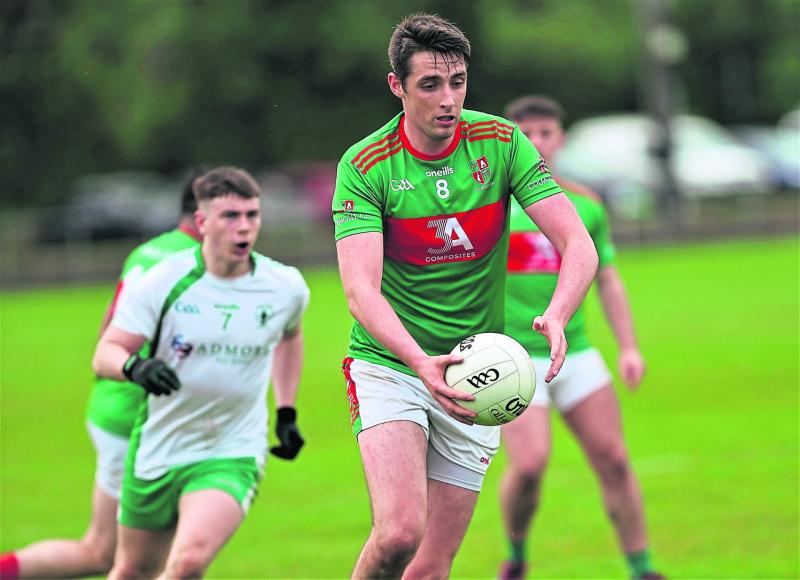 Fergal Sheridan on the ball for Colmcille ahead of Killoe opponent Jake Donnelly. Action from the Division 1 league game at Emmet Park on Friday evening Photo: Syl Healy

Colmcille overcame the significant setback of playing the final quarter of a close contest with 14 players as they came out on top by a single point against Killoe in the All County Football League Division 1 clash at Emmet Park on Friday evening last.

Just after Jack Macken fired over a cracking long range point from play to leave the visitors leading by the minimum of margins (0-10 to 0-9), Declan Reilly was sent-off after receiving a second yellow card.

But Killoe failed to capitalise on the numerical advantage for the remainder of the match with the sides sharing a further six points as Colmcille continued their good run this season under new manager Mickey Harkin.

Particularly impressive in the deserved win over Emmet Og were the midfield pairing of Fergal Sheridan and Jack Macken who accounted for a total of nine points between them while the top scorer for the home side was Mark Hughes who registered six points.

Hughes was a constant threat in the first half, shooting four scores (one free) as Killoe (minus Larry and James Moran, Cian Dooner and Darren Moffett) ended up leading by 0-8 to 0-5 at the break.

Also on target for Tommy Donohoe’s side in the first half were Ronan McGoldrick (who landed a couple of excellent points), Eamon Keogh and Jake Donnelly.

The towering Fergal Sheridan shot three points (all from play) for Colmcille with Jack Macken (free) and Rory Hawkins getting the other scores.

Colmcille were guilty of some poor finishing in the first half, kicking six wides as compared to just one for Killoe, but the eventual winners produced a much improved performance on the changeover.

It would probably have been a different story had Ryan Moffett not missed a goal chance for Emmet Og in the 12th minute while Eamon Keogh shot against the crossbar in the 38th minute in a lucky escape for Colmcille.

Moments later Colmcille defender Gerry Mulligan broke through on a penetrating run, only to shoot into the sidenetting, and it was a real ding-dong battle in the second half.

Colmcille made a strong start on the changeover with a point apiece from Cathal McCabe and Paul McKeon before Ronan McGoldrick replied for Killoe when he converted a free.

Colmcille came storming back with three points (two frees) in a row from Jack Macken to hit the front but the sides were all square again when Mark Hughes fired over a free in the 49th minute.

Despite losing Declan Reilly, Colmcille regained the lead (0-11 to 0-10) with a fine point from substitute Conor Grant in the 51st minute and scores were then exchanged between Killoe wing back Jake Donnelly and Jack Macken (free).

Macken was on the mark from another free in stoppage time and while Mark Hughes then fired over a free for Killoe, Colmcille kept possession in holding out for a narrow victory.