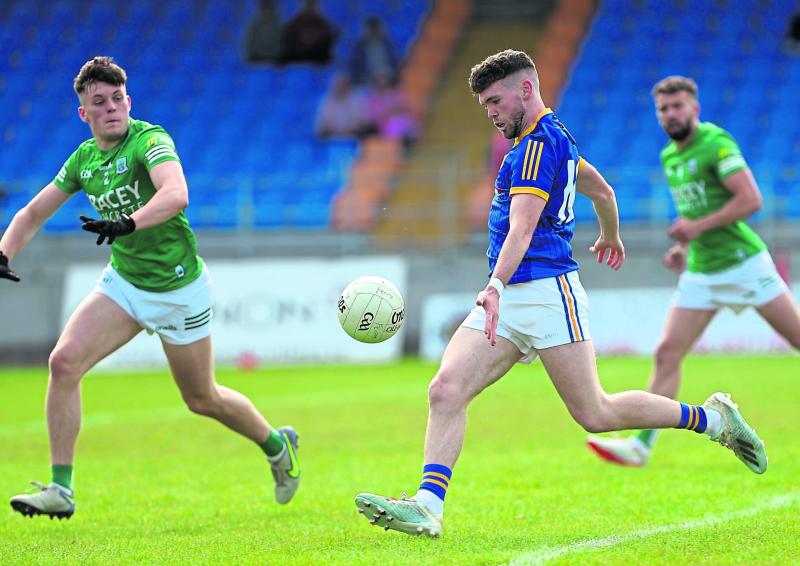 Keelin McGann on the ball for Longford against Fermanagh. Action from the Tailteann Cup North Round 1 clash on Saturday evening last Photo: Syl Healy

Leading by 0-5 to 0-1 at one stage in the first half and looking good to make further progress in the new second tier competition, Longford eventually suffered a knock-out blow in the first round of the Tailteann Cup North.

On a glorious Saturday evening, weather wise, a good attendance of over 1,000 spectators gathered at Glennon Brothers Pearse Park to watch the home county getting floored by a late, late Fermanagh goal in the first ever senior football championship clash between the counties.

The visitors were leading by a single point when Ultan Kelm struck for the killer score in the final minute of normal time and there was no way back for Billy O’Loughlin’s side in this disappointing early exit as their inter-county season ended on a sour note.

Prior to the decisive Fermanagh goal, James Moran had a goal attempt blocked down when he should probably have opted for the equalising point and there were other costly chances squandered in the second half of this tight contest.

Both counties were reduced to 14 players during the course of this ultra defensive match, both for black cards, and first to be dismissed was Fermanagh centre-half-forward Conall Jones in the 28th minute of the first half.

Even at that Longford had to be content with a slender 0-6 to 0-4 lead at the break after enjoying the greater share of the possession but failed to make the numerical advantage count on the scoreboard.

The only Longford forward to get his name on the scoresheet in the first half was the impressive Keelin McGann whose quick pace created considerable problems for the Fermanagh defence.

McGann broke through on another of his exciting penetrating runs in the early stages of the second half but was denied a goal when his well struck shot was tipped over the bar by the opposing keeper Sean McNally as the Longford lead was extended.

Physically stronger Fermanagh then stepped up another gear to fire over five points in a row between the 39th and 51st minutes to take the lead (0-9 to 0-7) and would have scored a goal during this dominant period but for a brilliant point-blank save from Paddy Collum who denied the clean through Luke Flanagan.

The Fermanagh cause was certainly helped when Longford defender Ryan Moffett received a black card in the 41st minute but a determined revival materialised when the home side were restored to 15 players.

A brace of points from effective impact substitute Mark Hughes, along with another fine score from Moffett, left the sides all square before Fermanagh regained the lead with a point from a free converted by Quigley in the 64th minute.

A draw and extra-time was looking the likely outcome before the always dangerous attacker Ultan Kelm got the goal to settle the issue and Fermanagh just about deserved to advance a stage further in the Tailteann Cup.

Longford finished the game with 14 players when Keelin McGann was branded with a black card in the first minute of stoppage time, moments after the killer goal from Kelm.

Thus the Longford boss Billy O’Loughlin and his extended backroom team were left to reflect on a mixed season that failed to yield a home win in the five fixtures at Pearse Park that was once labelled a ‘fortress’.

At least the Division 3 status in the National League was secured and while the mentors introduced a lot of young players into the fold the learning process will continue during the current transition period.

Backed by a big contingent of supporters who actually outnumbered the home followers, the Fermanagh roar really inspired their team and particularly so in the second half when the course of the game gradually changed.

Longford started well with a point from a Darren Gallagher free with just 90 seconds gone on the clock and further scores followed from Keelin McGann and Gallagher (free) before Fermanagh opened their account with a point from Ciaran Corrigan in the 11th minute.

Back came Longford with a brace of points from frees converted by Gallagher and then came the first of four scores from influential Fermanagh midfielder Ryan Jones in the 24th minute.

Longford suffered a setback soon after when the roving Iarla O’Sullivan, selected to start at right-corner-forward, was forced to retire injured (replaced by another of the newcomers Jordan Shiels) and the gap was reduced moments later when Sean Quigley converted a free.

The black card for Conall Jones for a foul on ‘marked man’ Michael Quinn should have lifted Longford and while a fine point followed from Kevin Diffley in the 30th minute, it was Fermanagh who brought the first half scoring to a close when Ultan Kelm broke through to shoot over the bar when a goal was definitely on.

Just before the half-time whistle, a vital interception by Barry O’Farrell started the slick move that created a goal chance for Daniel Reynolds but he was knocked off the ball as the shot was deflected wide of the post.

That was a lucky escape for Fermanagh, as was the Keelin McGann point early on the changeover in his close attempt to find the back of the net, but Longford failed to register another score until the 53rd minute when Mark Hughes was on target.

In between, the Ulster outfit registered five points through Sean Quigley (two frees), Ryan Jones, Conall Jones and Darragh McGurn and that proved to be a decisive swing in the eventual outcome - not forgetting the black card for Ryan Moffett and a  vital factor in Fermanagh's favour.

Longford, to their credit, got back on level terms (0-10 to 0-10) thanks to the scores from Hughes (2) and Moffett but Fermanagh finished the job with a point from Quigley and the goal from Ultan Kelm who was put clean through by Conall Jones on his way to shooting past Paddy Collum in the 70th minute.

Another cracking point from Ryan Jones delighted the Fermanagh followers, who certainly made their voices heard, and Longford battled it out to the bitter end with a couple of consolation points from Darren Gallagher (free) and substitute Fergal Sheridan deep into stoppage time.