Longford and Louth clash in the Lory Meagher Cup Final 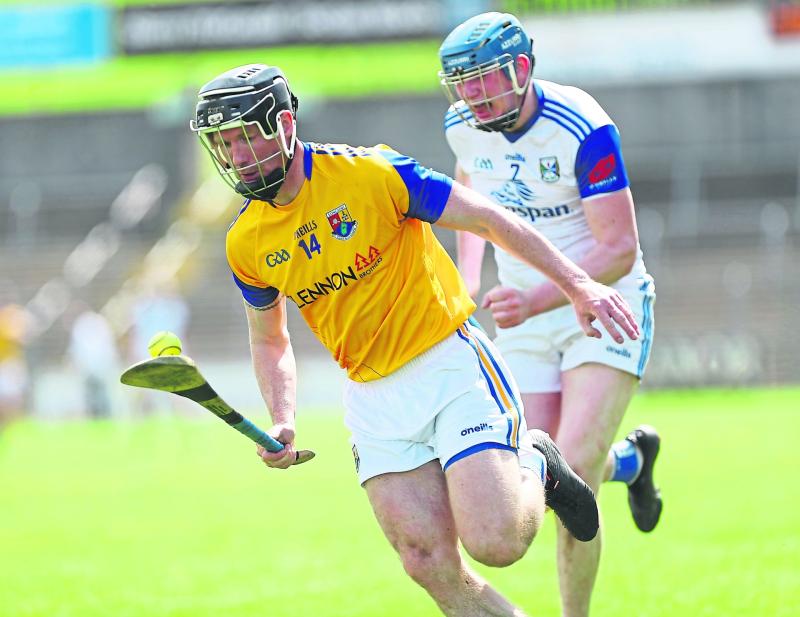 Cathal Mullane on the attack for Longford against Cavan in the Lory Meagher Cup Round 5 game at Kingspan Breffni Park on Saturday last Photo: Syl Healy

Clonguish sharpshooter Joe O’Brien clocked up the impressive total of 13 points as Longford qualified for the Lory Meagher Cup Final for the first time since 2014 after beating Cavan in the remaining group stage fixture at Kingspan Breffni Park on Saturday last.

The county senior hurlers recovered from a slow start to gradually assert their superiority over the gritty neighbouring rivals and are now looking forward to the title decider against Louth at Croke Park this Saturday, throw-in 1pm.

Unfortunately, Longford will be forced to field without their captain Johnny Casey who sustained a serious shoulder injury (broken collar bone) against Monaghan in the previous round.

Wolfe Tones Mostrim clubman Cathal Mullane, the vice-captain, will now lead the team in their quest for championship glory at GAA headquarters.

While Longford had the comfortable margin of seven points to spare in the finish, Cavan got off to a great start to lead by 0-4 to 0-0 before Joe O’Brien got the opening score for the visitors who ended up in front by the minimum of margins at the break, 0-10 to 0-9.

A strong start to the second half saw Longford fire over six points in a row through Mullane (2), O’Brien (2), Paddy Lynam and Cian Kavanagh as they began to pull away.

The advantage was extended to a commanding 11 points (0-23 to 0-12) but Cavan never gave up the right and their perseverance was rewarded with a couple of goals in quick succession from Canice Maher and substitute Rory Farrell in the closing stages of the match.

A fine point from wing back Adam Quinn in the 66th minute settled the Longford nerves on the way to their expected victory and the manager, Westmeath native Adrian Moran, will be hoping that John Mulhern (Wolfe Tones Mostrim) will have recovered from injury to feature in the eagerly awaited final at Croke Park.

Louth, who lost to Longford by a single point in the group stage clash at Glennon Brothers Pearse Park a few weeks ago, made it through to the Lory Meagher Cup final on the head-to-head rule after their narrow 2-18 to 2-16 win over Leitrim on Saturday.

Apart from the usual major contribution from Joe O’Brien, the powerful Enda Naughton was rock solid at full-back in producing a commanding performance while Adam Quinn also figured most prominently in the defence.

Cathal Mullane, when moved out to the half-forward-line in the second half, fired over four cracking points when Longford eventually stamped their authority on the game.

After losing all of their previous four games in the championship, Cavan were just playing for pride and broke fast with points (two frees) from Canice Maher (2), Fiachra Hughes and Diarmaid Carney.

Longford gradually got their act together with Joe O’Brien landing a terrific long range point in the 7th minute and six more scores (one free) followed from the exceptional attacker in the first half.

Paddy Lynam (two frees) and David Buckley (free) were also on target for the midlanders and just a solitary point separated the sides at half-time with the other five Cavan scores coming from centre-half-back Jack Barry (2), Cillian Sheanon, Hughes (free) and Carney.

Longford were rather sluggish in the first half but stepped up another couple of gears on the changeover to register a total of 17 more points through Cathal Mullane (4), Joe O’Brien (6), Paddy Lynam (2), Cian Kavanagh (2) and David Buckley along with a brace from Adam Quinn.

Kavanagh went close to getting a goal in the early stages of the second half when his low shot was saved by the opposing keeper Darren Sheridan.

Although Cavan were wilting under the pressure they kept plugging away and the fact that they managed to register another 2-5 will give the Longford mentors some cause for concern in the build up to the championship final.

Cavan's first score in the second half came from James Smith in the 44th minute while the other points were fired over by Cillian Sheanon, Smith and Fiachra Hughes (2).