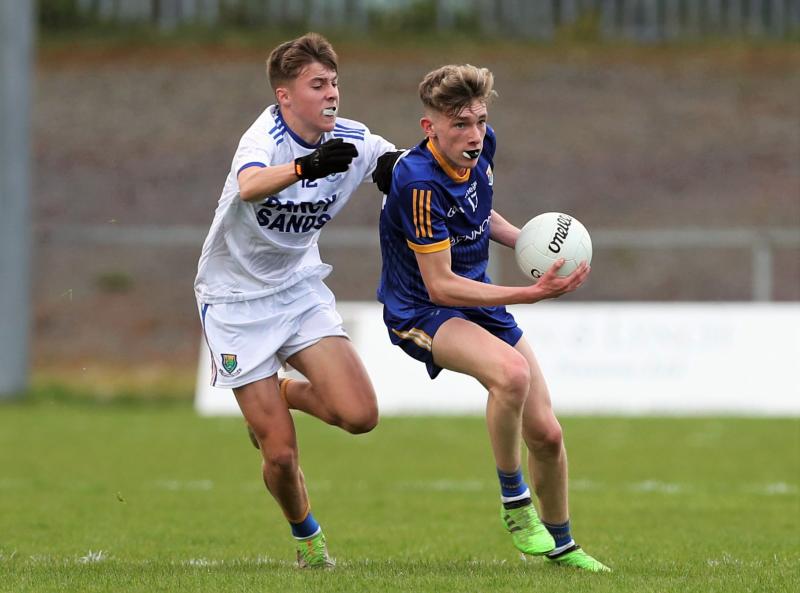 Ross Shields pictured in action for the Longford minors against Wicklow in the Leinster Championship quarter-final Photo: Syl Healy

After showing so much promise in the group stage, there was major disappointment as the ultra defensive Longford U-17 side were knocked out of the Leinster Minor Football Championship by so resilient Wicklow in an extremely tight contest at Glennon Brothers Pearse Park on Wednesday evening.

A place in the provincial semi-final was at stake and while Gareth Johnston’s charges led by 0-5 to 0-3 at the break, they made poor use of the extra man advantage when Wicklow had defender Callum Clarke dismissed for a black card foul with 22 minutes gone in the first half.

Although strongly fancied Longford went further in front when Michael Flynn slotted over a fine point with four minutes gone on the changeover, the frustrated home side remarkably failed to register another score in shooting five costly wides in the second half.

Longford were left to rue a couple of missed goal chances by Paddy Moran, the first in the 24th minute and the second in the 47th minute with the opposing keeper Mark Shannon producing a couple of vital saves.

Wicklow, showing the greater will to win, gradually closed the gap and got back on level terms when full-forward Alex Kavanagh fired over a close range free in the 48th minute

The visitors were also guilty of kicking a number of wides during the course of the game, including a goal opportunity when Paidi Kavanagh shot narrowly wide midway through the second half.

Extra-time was looming with nothing separating the sides and a draw looking the likely outcome but Kavanagh landed a massive point in the first minute of additional time and moments later the underdogs Wicklow clinched a surprise victory when Jack Kenny converted a long range free.