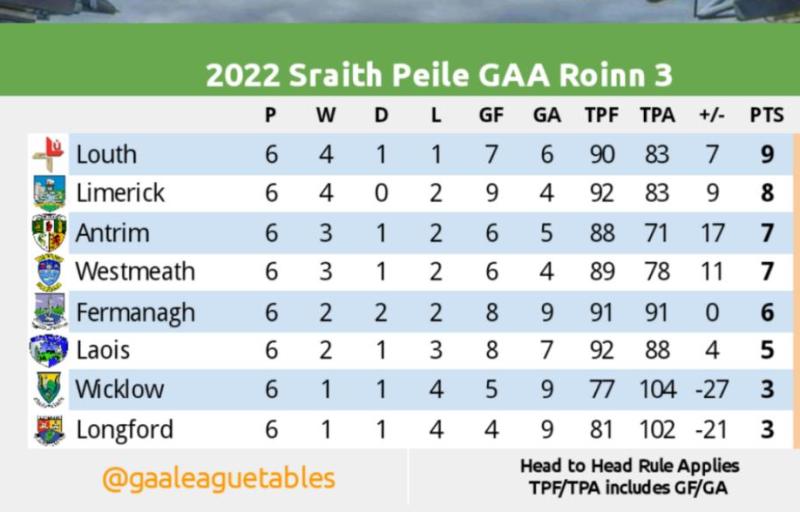 The bitter disappointment of the demoralising defeat against Wicklow at Glennon Brothers Pearse Park on Sunday last will quickly be forgotten if Longford can complete the great escape from relegation.

With results in a couple of other games working out in their favour last weekend, the county senior footballers will surely consolidate their Division 3 status in the National League if they manage to beat Laois in the final round fixture at O’Moore Park this Sunday, throw-in 2pm.

If that result should happen to materialise, then Longford will survive on the head-to-head rule on the same number of points as Laois - providing that  the other strugglers Wicklow fail to win against the table toppers Louth in Aughrim with Mickey Harte’s rapidly improving side the red-hot favourites to clinch one of the two promotion places.

It will indeed be ironic if Longford avoid the dreaded drop down into Division 4 next season with the manager Billy O’Loughlin facing his native Laois and a big boost will be the expected return of Michael Quinn.

Captain Quinn was ruled out of the last two games against Wicklow and Antrim after playing  a most prominent role in the surprise win over Westmeath.

Longford’s only other league point was picked up in the draw at home to Louth and they will be hoping to cause an upset against Laois despite the poor record at O’Moore Park.

The defeats against Limerick, Fermanagh, Antrim and Wicklow were hard to take and many mistakes have been made in the current campaign.

Laois let victory slip in the one point defeat at home to Limerick on Saturday evening last and are now pitched into a relegation battle that was not supposed to happen.

Full-forward Evan O’Carroll is the dangerman and with other key players in the vastly experienced duo, John O’Loughlin and Kieran Lillis, the general opinion is that Laois will do enough to stay up and particularly so with home advantage.

A draw will be good enough for Billy Sheahan’s inconsistent side to survive due to their superior scores difference but Division 3 is so unpredictable and Longford must believe that the win they need to avoid relegation could be achieved in this season of strange results.