Longford suffer another setback in tale of woe against Wicklow

NFL Division 3 relegation decider away to Laois on Sunday 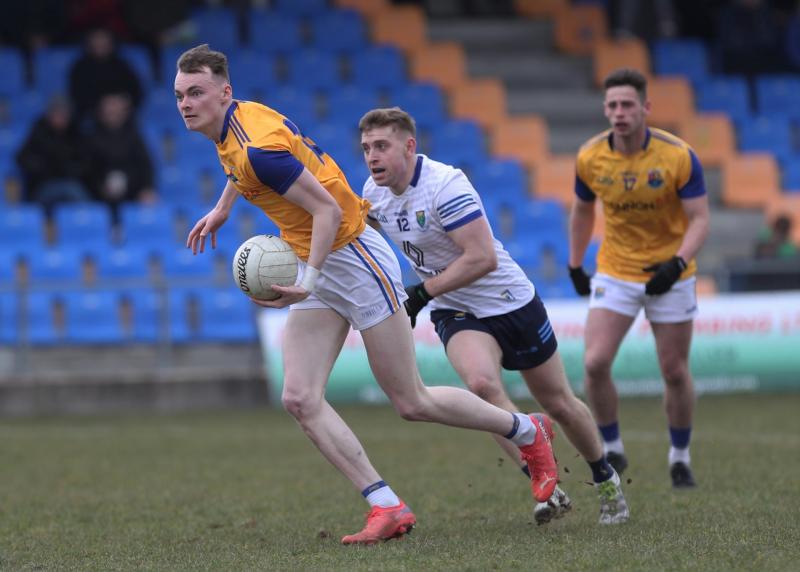 Jack Duggan (who scored 1-5) on the attack for Longford against Wicklow in the NFL Division 3 game on Sunday last. Also in the picture is Joseph Hagan Photo: Syl Healy

Longford are on the brink of the dreaded drop down into Division 4 of the National Football League after losing by a point in the relegation battle against the previously winless Wicklow at Glennon Brothers Pearse Park on Sunday last.

Billy O’Loughlin’s struggling side are now under severe pressure to consolidate their Division 3 status but might still survive on the head-to-head rule if they can beat Laois (losers against Limerick on Saturday) in the final round fixture at O’Moore Park on Sunday, throw-in 2pm.

Even at that, Longford are depending on Wicklow failing to win at home against the table toppers Louth for that last ditch situation to materialise and the midlanders certainly cannot afford to be without Michael Quinn for a third game in a row.

The captain Quinn was unable to take his regular place on the team for the crucial match against Wicklow while Kevin Diffley, selected to start at midfield, was also ruled out in a double blow for the home county.

Longford let a commanding lead slip after goals were scored by Jack Duggan and Darragh Doherty in the early stages of the game to leave the visitors trailing by 2-2 to 0-2 with just 12 minutes gone on the clock.

But the course of the contest  gradually changed as the Garden County dug deep to close the gap and were only a couple of points behind at the break, 2-5 to 0-9.

Had Oran Kenny converted a clear-cut goal chance immediately on the changeover it would probably have been a different story but right throughout the game wide gaps were appearing in the very slack Longford defence, clearly reflected in Wicklow’s impressive total of 20 points.

The relegation battle developed into a real ding-dong affair in the second half and Wicklow went ahead when Kevin Quinn slotted the ball over the bar in the 60th minute.

Longford battled back to level matters but the opposition continued to create scoring chances and were two points in front when substitute Alan Dillon was on target in the second minute of stoppage time.

A late, late free converted by Jack Duggan was not enough to stop Longford sliding to their fourth defeat in the league as Wicklow held out to win by a point.

Inspired by some penetrating runs from the prominent left-half-back Iarla O’Sullivan, Longford raced into a six-point lead (2-2 to 0-2) with the ball breaking kindly for Jack Duggan to finish the ball to the net.

A fine point followed from Mark Hughes and there was no stopping O’Sullivan as he created the opening for Darragh Doherty to plant the ball into the corner of the net in the 11th minute.

When Oran Kenny struck the ball over the bar moments later, Longford were looking good for a badly needed win and much to the satisfaction of the loyal home supporters scattered among the small attendance.

Eoin Darcy converted a couple of frees for the early Wicklow scores and they came storming back to add another seven scores to their tally during the remainder of the first half through Dean Healy (2), Mark Healy, two more from Darcy (one free) with Kevin Quinn and goalkeeper Mark Jackson (free) also on target.

Longford replied with three points from play, the first from Darragh Doherty in the 18th minute with Jack Duggan and Oran Kenny also on the mark for the home side who had to be content with a slender lead at the break.

Two points ahead going into the second half it could have got a lot better for Longford when Jack Duggan put Oran Kenny through for another goal chance with less than a minute gone on the changeover but his close range shot was saved by the opposing keeper Jackson.

The rebound broke to James Moran but his effort was blocked in what was a lucky escape for Wicklow who launched an immediate counter-attack that yielded a point from wing back Fintan O’Shea.

A very good score followed from Longford’s chief marksman Jack Duggan before Wicklow hit back with a brace of points through the keeper Jackson (from a well struck ‘45) and fellow defender Patrick O’Keane to leave the sides all square (2-6 to 0-12).

Two more Longford points were registered by Joseph Hagan and Duggan but Mark Kenny and Eoin Darcy (free) replied for Wicklow who were winning a lot of possession and growing in confidence with the aid of the wind.

Another score from Hagan regained the lead for Longford in the 55th minute, only for Wicklow to tack on two more points through Padraig O’Toole (whose long range shot hopped over the bar) and Kevin Quinn.

Dean Healy then landed a well struck point before Darren Gallagher burst through in his attempt to score a goal for Longford in the 62nd minute but he was impeded when he pulled the trigger and the resulting free was converted by Jack Duggan.

The visitors were now in front by the minimum of margins (0-17 to 2-10) and were in no mood to surrender their slender advantage.

The sides shared six more points from there until the finish with the game stretching into the seventh minute of stoppage time before the Cavan referee Margaret Farrelly blew the final whistle.

Another brace from Eoin Darcy (free and play) and Alan Dillon accounted for the Wicklow scores while Keelin McGann, Darren Gallagher (free) and Jack Duggan (free) were on target for Longford who have one last chance to escape from relegation when they head for Portlaoise on Sunday next.

With the sides all square (2-11 to 0-17), Jayson Matthews flicked the ball to the Wicklow net in the 67th minute after connecting with a pass from Darren Gallagher but the goal was disallowed for a square ball infringement.

Straight away, Wicklow broke to regain the lead with a point from a free converted by Eoin Darcy and they ran out worthy winners in a tense finish after squandering a few other scoring chances in the second half.