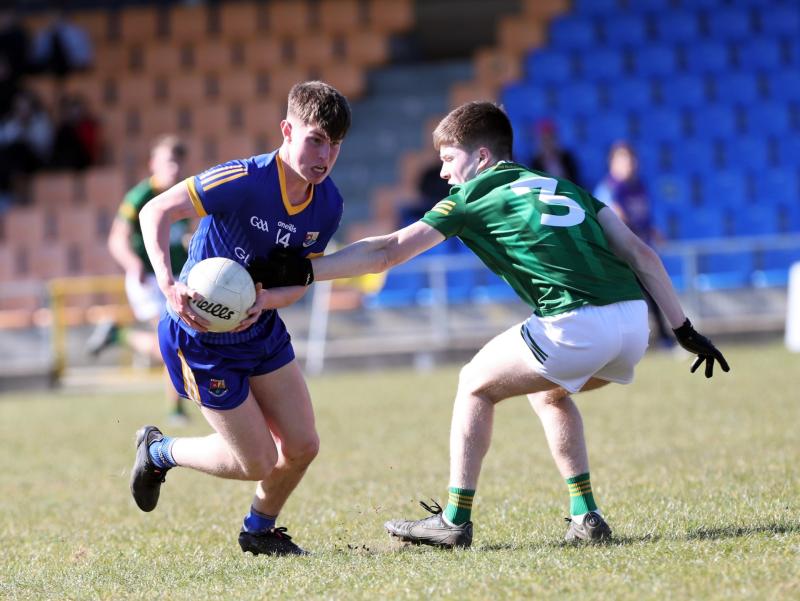 Paddy Moran on the attack for Longford against Meath. Action from the Leinster Minor (U-17) Football Championship Group 2 Round 1 game at Glennon Brothers Pearse Park on Saturday Photo: Syl Healy

Showing remarkable resilience throughout the entertaining game, the Longford U-17 footballers produced a mighty performance to score a great win over the reigning All-Ireland minor champions Meath at Glennon Brothers Pearse Park on Saturday.

It was a tremendous start to the 2022 Leinster Minor Football Championship for Gareth Johnston’s well drilled side and the home county got a big boost in first half stoppage time with a goal from a penalty converted by Paddy Moran after he was fouled in the square.

That left Longford leading by 1-7 to 0-5 at the break and despite playing against the wind in the second half the advantage was extended to a commanding six points when Matthew Carey fired over a free with six minutes gone on the changeover.

Meath were looking in trouble but a well struck goal from Cian Commons soon after brought the visitors right back into contention and the pressure was piling on Longford when they were reduced to 14 players following a black card for midfielder Jack Belton in the 48th minute.

The gap was closed to just a solitary point at that stage and while Meath hit the front (1-10 to 1-9) with time running out, Longford battled back with a brace of scores through Clonguish duo Michael Flynn and Matthew Carey (stoppage time free) to clinch a well deserved win.

Next up for Longford in the group phase of the provincial championship is the Round 2 clash against Kildare (very easy 3-12 to 0-5 winners over Offaly in Round 1) in Newbridge on Saturday April 2 in the quest to qualify for the knockout stage.