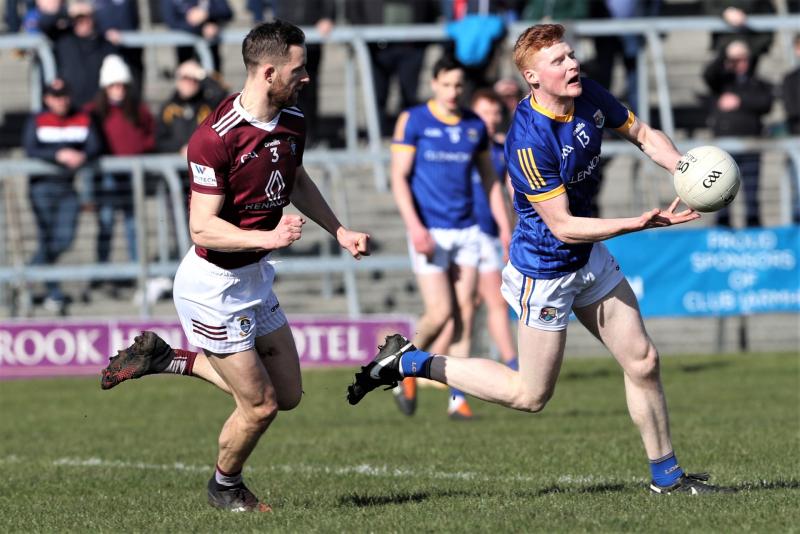 Jayson Matthews on the attack for Longford against Westmeath. Action from the NFL Division 3 game at TEG Cusack Park, Mullingar on Saturday last Photo: Syl Healy

Given little chance of achieving a positive result against the original promotion favourites Westmeath, the Longford footballers eased the relegation pressure with a wonderful win in Mullingar on Saturday last.

Showing tremendous character and courage, the county seniors produced their best performance under new manager Billy O’Loughlin to spring a surprise - much to the sheer delight of their loyal supporters in the aftermath of the despair of losing to Fermanagh the previous weekend.

With just a solitary point on the board, this was a crucial first victory in Division 3 of the National Football League this season.

A big boost in the battle to avoid the dreaded drop down into Division 4 and revitalised Longford will head to Belfast to face Antrim at Corrigan Park on Saturday in a fairly confident frame of mind.

Leading the charge against the neighbouring rivals Westmeath was the inspirational captain Michael Quinn who got the green light to play at TEG Cusack Park following a successful appeal to overturn the very harsh red card he received against Fermanagh.

Powerful midfielder Darren Gallagher also played a major role as stunned Westmeath were whacked and on the evidence of this unexpected win, Longford will certainly not fear the neighbouring rivals when the counties clash again at the same venue in the Leinster Championship quarter-final on Sunday May 1.

The driving force of Quinn and Gallagher continues to be a key factor and the experienced duo are very much the main men on a Longford team currently going through a transition period following the introduction of a number of promising young players.

Jack Duggan and Eoghan McCormack were making their first starts in the National League for the rearranged Round 3 fixture against Westmeath and the emergence of Keelin McGann is another bright spark for the future of Longford football.

Although a senior regular in the recent past, Joseph Hagan is another of the young guns and he was in impressive form against Westmeath in firing over four vital points during the course of this intriguing local derby.

After conceding eight goals in the previous three games against Fermanagh, Louth and Limerick, there was a great need for the Longford defence to tighten up a lot and that thankfully was the case at Cusack Park as they managed to keep their net intact.

Patrick Fox and Andrew Farrell were rock solid in the full-back-line with the resolute Farrell restricting the Westmeath dangerman John Hesin to just two points.

Heslin had clocked up the magnificent total of 1-10 in the narrow defeat against Louth in the previous round but he found the going tough in a tremendous tussle with Longford full-back Farrell.

Minus the injured  Dessie Reynolds, a quick start from Longford almost yielded a goal when Jack Duggan put Michael Quinn clean through for a glorious chance with just three minutes gone in the game but the opposing keeper Jason Daly produced a fine point-blank save.

Westmeath then took over to establish what appeared to be a comfortable 0-5 to 0-1 lead with points from Alex Gardiner, Jonathan Lynam, Sam McCartan, John Heslin and Lorcan Dolan with Darren Gallagher (play) getting the Longford score in the 8th minute.

But Billy O’Loughlin’s boys came storming back to fire over seven points with Joseph Hagan going close to getting a goal in the 25th minute when his well struck shot was parried over the bar by the Westmeath keeper.

The other points came from Gallagher (two frees), two more from Joseph Hagan (play) with Jayson Matthews (on target from a tight angle) and Dylan Farrell (free) also getting their names on the scoresheet.

Four points in front midway through the first half, Westmeath only managed to register two more scores in the second quarter through Gardiner and Ronan O’Toole as Longford ended up leading by 0-8 to 0-7 at the break.

Both sides were guilty of shooting a lot of wides throughout the match and while the home side regained the lead with a point apiece from Nigel Harte and John Heslin, the latter landing a brilliant strike in the 43rd minute, Jack Cooney’s side failed to register another score until the fifth minute of stoppage time with substitute TJ Cox shooting over the bar.

It might have been a different story but for the penalty save by Longford keeper Paddy Collum who denied John Heslin a goal for Westmeath with three minutes gone on the changeover.

Competent Collum also stopped the rebound that broke to Heslin and that was a major turning point in the eventual outcome.

Westmeath became increasingly frustrated as the second half wore on with Heslin having another goal attempt blocked while it took a great reflex save from the home keeper Daly to stop a cracking shot from Duggan in the 60th minute.

Things went from bad to worse for Westmeath who were reduced to 14 players when David Lynch (straight red card) was sent-off in the 61st minute.

And that became 13 when second half substitute Kieran Martin received a black card deep into stoppage time.

Make no mistake about it, Longford were full value for this morale boosting victory and they could even afford the luxury of kicking three wides in the closing stages of the game.