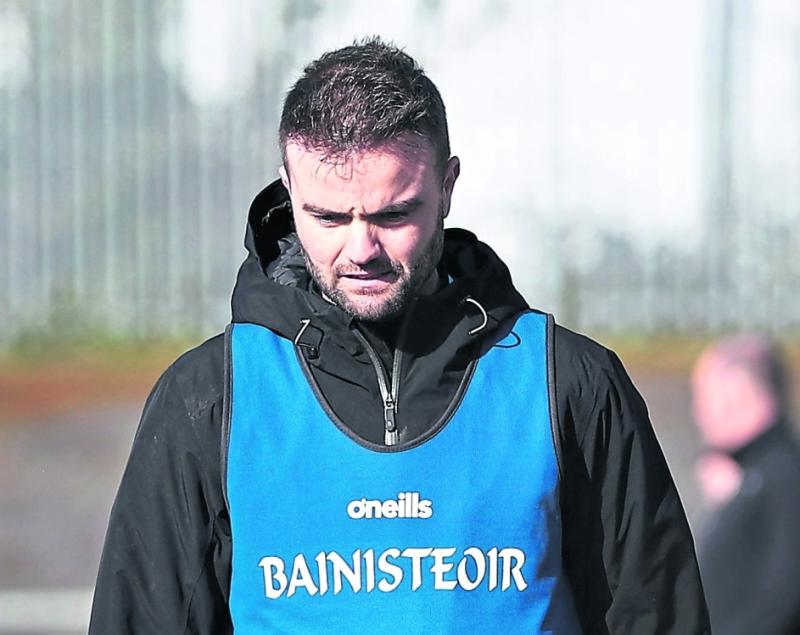 Longford manager Billy O’Loughlin was still trying to compose himself following a fiery end to his side’s defeat against Fermanagh in the National League clash at Glennon Brothers Pearse Park on Sunday last.

In the closing stages of the game, O’Loughlin was shown a yellow card by Sligo referee Barry Judge while selector Eugene McCormack was shown a red card.

After the game, O’Loughlin remonstrated with the referee as Longford were left frustrated by some decisions.

The most notable of these was the straight red card shown to Mickey Quinn late in the first half. It appeared to be a harsh decision, and few would argue that it turned the game firmly in Fermanagh’s favour.

With the wind at their backs and Longford’s defensive lynchpin/playmaker out of the picture, Fermanagh dominated the second half.

O’Loughlin tried to make sense of the sending off. “The referee had blown for a mark. Mickey had stopped play and the Fermanagh No. 10 was too strenuous on Mickey in his challenge and for whatever reason, he fell down,” he commented.

“The referee gave Mickey a red card, having not seen the incident. A decision such as this one can have a big bearing on a team’s season.

“We were in the ascendancy and were five points up going into half-time. However, we faced the second half without our talisman and facing an atrocious breeze,” he added.

The Laois native said that the management team will review video footage of the Quinn sending off in the hope of getting the red card rescinded.

“It is really disappointing. We will try and appeal the decision, having looked at it with the video analysis guys,” he explained.

O’Loughlin must now focus on the Westmeath game on Saturday. “We will be gunning for that game. It is a local derby and Westmeath were beaten by Louth. We will prepare the best we can for this game,” he stated.

Despite this defeat and Longford’s perilous position, O’Loughlin believes his side can retain their Division 3 status.

“We have four games left. We are a young side and battling as hard as we can. We haven’t got the rub of the green in the past two games in Pearse Park.

“We have a lot of inexperienced players, but we battled very hard with 14 men and got it back to within a goal,” he stated.

Two of the more experienced Longford players, Robbie Smyth and Ross McNerney, have left the panel.

However, the manager refused to be drawn on their departure, instead dwelling on the players he has at his disposal.

“We have a panel of 33 or 34 players. We have 10 20-year-olds and three 19-year olds. It is fantastic for Longford that we have these guys. I will only comment on the lads that are putting on that jersey. There is a lot of emerging talent,” he remarked.

“Dylan Farrell came on and got a goal. He showed great initiative in taking that goal. We are trying to blood players. I don’t want to make a big deal about players that are not there,” he added.

O’Loughlin attended the game between Laois and Antrim the previous night and overall, he believes that there are points to be gained for Longford in the remaining four games.

“That game in O’Moore Park was a very low scoring game. There are points on offer for us,” he explained.

“It is very enjoyable for both the players and management, and we are hoping that the results will come. It is not for want of effort anyway,” the manager concluded.