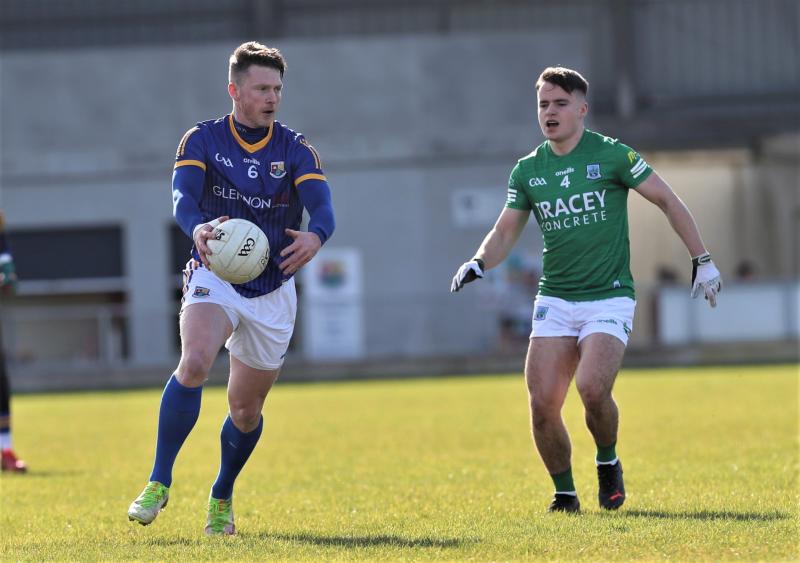 On the ball for Longford against Fermanagh is the captain Michael Quinn who was controversially sent-off in first half stoppage time Photo: Syl Healy

Under pressure Longford are still searching for their first win in the 2022 National Football League after suffering a significant setback against Fermanagh in the Division 3 clash at Glennon Brothers Pearse Park on Sunday with Sean Quigley scoring a couple of crucial goals for the visitors in the early stages of the second half.

With just a solitary point picked up in their opening three fixtures, Billy O’Loughlin’s side are now pitched into serious relegation trouble and their hopes of avoiding the dreaded drop down into Division 4 next season are fading fast.

While Longford led by five points at the break (0-8 to 0-3) after playing with the advantage of the strong wind in the first half, they suffered a shattering blow when commanding centre-half-back Michael Quinn received a straight red card in stoppage time.

Quinn got caught in a tangle with Fermanagh opponent Ciaran Corrigan who fell to the ground and Sligo referee Barry Judge sent-off the Longford captain in what appeared to be a very harsh decision, much to the great anger of the bewildered home supporters.

Down to 14 players for the entire second half, it was always going to be a real uphill battle against the wind but it might have been a different story had Keelin McGann managed to convert a glorious goal chance with three minutes gone on the changeover when his point-blank shot was saved by the Fermanagh keeper Cian Newman.

Soon after Longford created another goal chance when defender Andrew Farrell burst through but he shot into the side netting in another lucky escape for the Ulster county.

The lethal Fermanagh full-forward Sean Quigley then floored Longford with two well-taken goals in quick succession (40th and 42nd minutes) and there was really no way back for the stunned home side.

Longford were given a glimmer of hope when a penetrating run from Darren Gallagher created the chance for substitute Dylan Farrell to flick the ball into the Fermanagh net with time running out to close the gap to three points (2-10 to 1-10).

But Fermanagh hit back with a point and a late, late goal from substitute Garvin Jones in the sixth minute of stoppage time to clinch a vital victory.