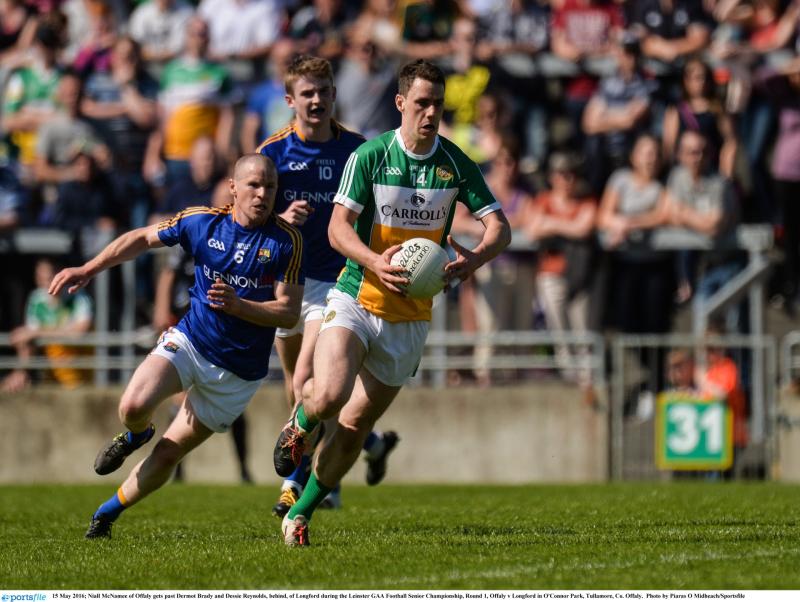 Niall McNamee of Offaly gets past Longford's Dermot Brady and Dessie Reynolds during the 2016 Leinster Championship clash between the counties Picture: Piaras O Midheach/Sportsfile

They say form is temporary but class is permanent and Offaly's Niall McNamee certainly proved that adage as the attacking ace grabbed 1-1 deep in injury time to break Longford hearts and give the home side a dramatic 1-16 to 2-12 victory in round two of the O'Byrne Cup at the Faithful Fields, Kilcormac on Wednesday night.

Longford, after their first round win over Louth, began sluggishly and found themselves three points down. Billy O'Loughlin's charges battled back manfully and playing some decent football and buoyed by a Dessie Reynolds goal, they deservedly led by 1-7 to 0-8 at half time.

John Maughan's Offaly, with Dylan Hyland and Bernard Allen performing impressively, managed to establish a 0-15 to 1-9 lead by the 58th minute and Longford looked to be in trouble.

But similar to what they did in Clonbonny four days earlier and following a series of substitutions, Longford rolled up their sleeves and they registered 1-3 without reply to go 2-12 to 0-15 ahead by the 72nd minute.

Jayson Matthews had just scored his 4th point when he was replaced by Mostrim's Padraig Joyce and Joyce certainly made his introduction to the Longford jersey tell as he racked up 1-2 and everyone in the ground felt Longford had done enough to complete back-to-back victories.

However, Offaly's tradition of winning All-Ireland football titles in the 1970s and 80s was built on their fighting spirit and their ability to salvage glory from the jaws of defeat, and in that typical never say die fashion Niall McNamee blasted 1-1 deep in injury time and broke Longford hearts. It marked an exciting conclusion to a hard fought encounter.

Longford conclude their group games in the O'Byrne Cup this Saturday, January 15 when they host Dublin in Glennon Brothers Pearse Park at 2pm. The Dubs crushed Louth in Parnell Park this evening and also got the better of Offaly in round one.

The Scoring
Offaly raced into a 0-3 to nil lead inside six minutes with Bernard Allen (mark), Jordan Hayes and Dylan Hyland dispatching points for John Maughan’s side.

Longford were soon on level terms after Ross McNerney unselfishly placed a clever pass into the path of Dessie Reynolds who finished to the net. Johnny Moloney’s point regained the lead for the hosts and Dylan Farrell (free) levelled matters for the second time, 0-4 to 1-1.

Dylan Hyland (free) and Ruairí McNamee registered Offaly points, with Darren Gallagher responding with a 17th minute Longford free leaving Billy O’Loughlin’s side a point adrift, 0-6 to 1-2, at the first half water break.

Longford enjoyed a period of dominance when the action resumed and some brilliant link-up play yielded points from Darragh O’Connell, Jayson Matthews (2) and Darren Gallagher, giving them a 0-6 to 1-6 advantage by the 27th minute.

Offaly finished the opening half with points from Dylan Hyland (free) and Bernard Allen, and sandwiched in between these scores Jayson Matthews chalked up his third point from a mark leaving Longford two points up at half-time, 0-8 to 1-7.

Within seven minutes of the resumption, Offaly were two points in front, 0-12 to 1-7, after Bernard Allen, Mark Abbott, Dylan Hyland (free) and Anton Sullivan were on target.

Darren Gallagher (free) and Ruairí McNamee traded points before Darragh Doherty’s 53rd minute point cut the deficit to the minimum, 0-13 to 1-9, just before the second half water break.

By the 58th minute, Offaly were three points clear after Bernard Allen and Dylan Hyland found the range yet again, 0-15 to 1-9.

Both managers, intent on giving as many players as possible game time, were busy emptying their benches and in the 63rd minute, Longford clawed back a point as Jayson Matthews, with his final contribution before being replaced by debutant Padraig Joyce, scored his 4th point.

Joyce’s impact was immediate and the Mostrim man was hardly 90 seconds into his debut when he accepted a pass from the experienced Darren Gallagher and plundered for a 65th minute goal, regaining the lead for Longford 0-15 to 2-10.

Oozing confidence, the lively and skilful Joyce added two super points to push Longford a goal clear, 0-15 to 2-12, as the game drifted into injury-time.

However, just as Longford believed they had victory wrapped up, Offaly, evoking memories of the last-gasp heroics that shaped their tradition, hit 1-1  through the mercurial Niall McNamee to complete a real snatch and grab 1-16 to 2-12 victory.