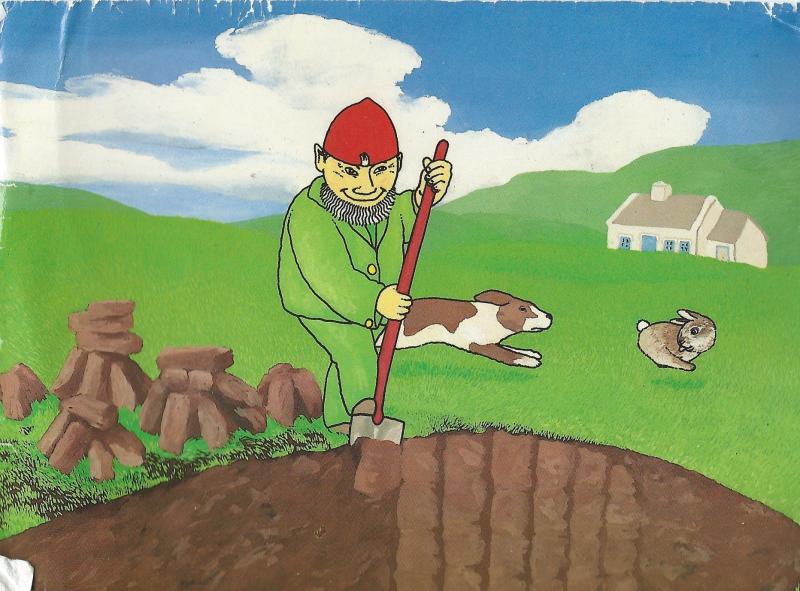 Anyone who has ever worked on the bog knows the pain and suffering and small bit of satisfaction it brings.

Bog of Allen -  The big bog slap bang in the middle of Ireland
Ashes - One of the side effects of turf burning is the constant cleaning.

Bog - the place where the turf is

Barrow - Essential piece of equipment needed to wheel the turf out to the side of the road.

Brown turf - Useless stuff. Burns too fast and gives no heat but is easy to save.

Bord na Móna - the State company responsible for harvesting peat and is now pulling out.

Briquettes - Fancy turf.. shur why do you think it has a french name.

Bog holes - the only thing that made going to the bog worthwhile as a child - jumping over (often into) bog holes.

Bags - plastic farm fertilizer bags caught on in 1980s and is now central to the season. Led to phrases such as 'are you baggin it', 'where would I get bags' or 'have you it bagged yet?'

Burn - Sun burn after a very hot day. A bog tan is usually only from the waist up

Cut - Another one popular in questions from the neighbours.. 'have you it cut yet', 'when are you getting it cut' and often 'we've ours cut long ago'.

Clamp of turf, clamping - Method of building a clamp and and art form to some, bog cotton.

Catching - When cutting with a slane someone had to catch the sods thrown up by the turf cutter.

Cleaning - Banks had to be cleaned in the old days to pave the way for spreading the turf.

Cuckoo - One of the natural sounds heard frequently on the bog. Will wreck your head after a while.

Clods - Small bits of turf good for starting a fire.

Chimney - Peat fires are prone to coating the inside of chimney pipe making the risk of a chimney fire bigger.

Calamine Lotion - creamy stuff you'd put on your back or head after a bad dose of bog sunburn.

Dust - never a good thing because someone would always say, 'it'll turn to dust if he doesn't get it home soon'.

Dog - Always had great craic but always managed to end up in the bog hole.

Drawing - That satisfying feeling of bouncing along the bog road with a box trailer full of turf, heading for home with another year of the sod complete.

Dump - Councils used to locate dumps in the bog now the take people to court for dumping on the bog.

Drain - Jumping them great craic - falling in not much fun unless you pushed your bigger brother in.

Eatin alive - By the midges and horseflies but also by your ould lad or uncle for not building the footings perfectly.

Footings - small mounds of turf built to dry turf especially if there has been a hot summer.

Footing the turf - method of building footings - an art form to some a nightmare to others.

Frogs - your distraction as a child on the bog.

Fire - what you do after you've save the turf or the dreaded bog fire that threatened the harvest.

Gorse - The unmistakable yellow bush dotted across the bogs of Ireland. They, unfortunately, catch fire from time to time in dry weather.

Gloves - a rarity in the bog, wearing them would raise questions about your toughness.

Heat - It could fierce hot on the bog leading to the bog tan. (See above)

Home - Another one popular in bog related phrases. 'Have you it home yet', 'time to bring it home', 'it's at home long ago'.

High bank - plots used to be separated between low banks and high banks.

Horsefly - silent but deadly insect whose sting is a curse.

Ice cream / lolly - A small reward on the way home from the bog - 99, Brunch, Choc Ice, Ice Berger, Tub, Golly Bar, Super Split, Little Devil, Loop The Loop, Cornetto, Funny Feet, Chilly Willies, Dracula, Jumbo, That-A-Way (15p Back In The Day) and of course The Fat Frog. (not to be confused with the alcholic beverage of the same name)

Jump - There is always things to be jumping: Drains, bog holes. Just don't fall in!

Killed - Not as in murder, although it comes close at times. Killed as in 'me back is killed from this turning',  'I'm killed out wheelin, you do a bit would ya.'

Load - A tractor-trailer of turf also a measurement of how much you have cut and saved and how much you need to get through the winter.

Midges - Vicious little things and you often hear, 'the midges are aten me alive lads'.

Next year - Son: 'I'm not doing this again next year'. Ould lad: 'Y'are or and don't go crying to your mother coz she wants more cut next year for her sister Mary'.

Ould fella - the man that is responsible for this misery.

Outdoors - What's good about the great outdoors if you're stuck on the bog turning turf for a day.

Quix (Irish made washing up liquid used to scrub the dirt out from under the fingernails after a day during turf).

Turbary rights - legal term as to whether you have rights to cut turf on plot of bog - gold dust in some parts of Ireland. Legally, you'll never own part of a bog for turfcutting purpose you con only retain turbary rights which can be inherited - often a bone of contention when the Will is opened - real problem if there is no Will.

Rain - the enemy but great fuel for complaining.

Rows - plenty of them on the bog.

Range - the monster that has to be fed with turf all winter in all weather to heat the water and the house.

Sod - a single piece of turf.

Slane or slean - the traditional iconic tool for cutting turf.

Spit - measurement used to gauge depth of a bog hold when cutting old style with a slane. (see above)

Spread - turf has to be spread on the bank by machine or barrow to allow it to dry.

Sun - friend as long as you don't get too much.

Sausage machine - popular in the 1980s until fellas realised it was destroying banks.

Shed - The home sweet home for the turf until its incinerated.

Turf - If we have to explain this one, you are in the wrong place.

Turning - Something that needs to be done with turf and leads to questions such as, 'have you it turned yet', 'getting a bit late to turn it'.

Throw - time to throw it in (to the shed). If it's left too long, someone will ask, 'have you not thrown it in yet' even though they can clearly see you haven't

Tadpoles - vital distraction for children on the bog.

Tae - vital on the bog with the sandwiches and to get some rest from the toil.

Underpants - The first sight you saw when you stood up take a break from the turning.

Venus flytrap - The bog is home to three of the native plant carnivores called sundews which are a distant cousin of the Venus flytrap. (I bet you didn't know that)

Wind - A friend on the bog. Nothing like a cool breeze on a hot day on the bog.

Wellies - nothing worse than fall into a drain with wellies on and the water gets into the boots and stays wet all day.

Welt - what the turf does to your hands.

Yes - The word you are least likely to use when ask if you are going to the bog.

Young lad / Young one: The term used for children working on the bog by fiends of the ould lad who don't know, or pretend not to know any of their names.

Zzzzzzzz - After a long day on the bog or after bringing home the turf....the bed...sleep.

Read also: THINGS YOUR OULD LAD MIGHT SAY TO YOU 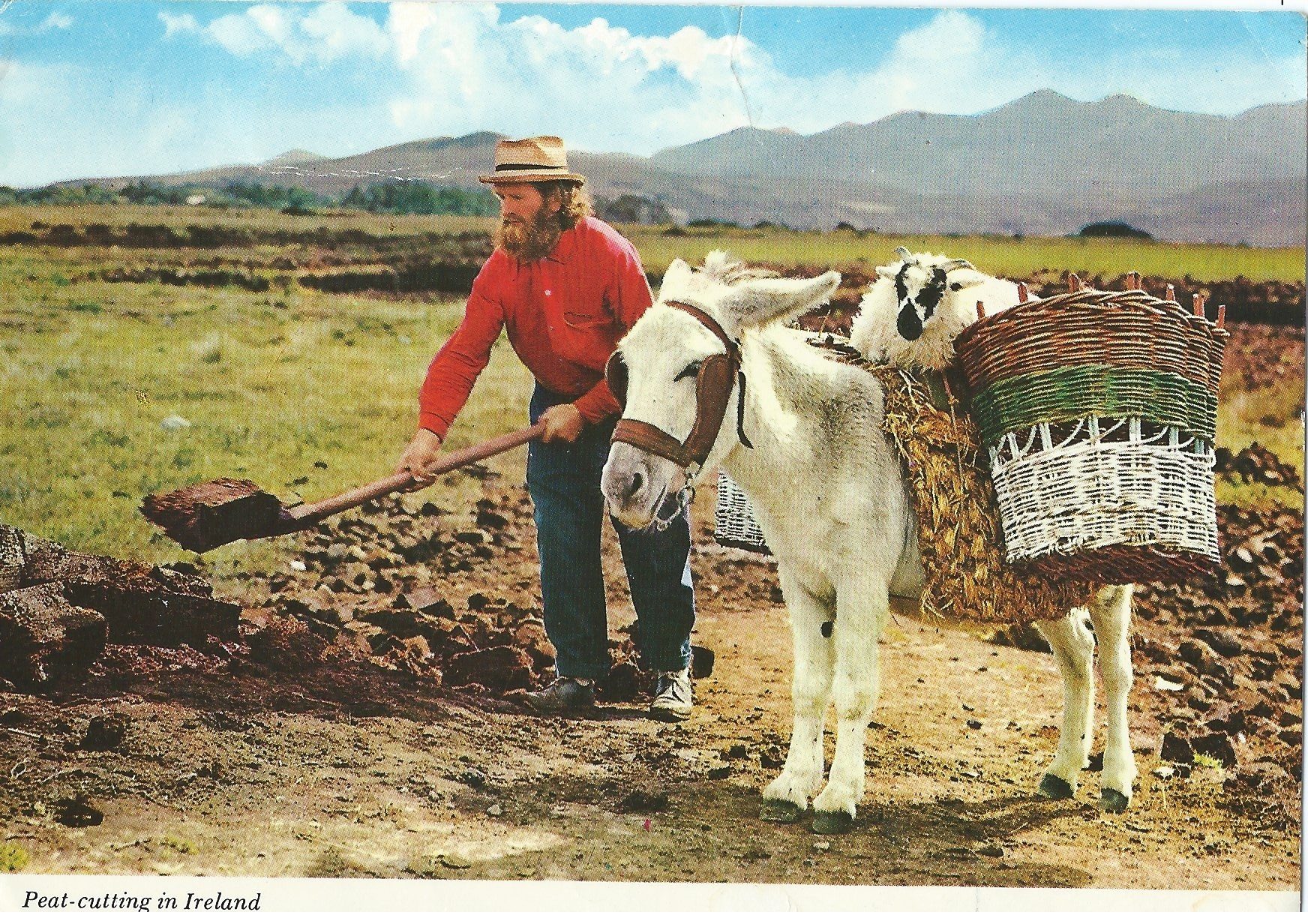