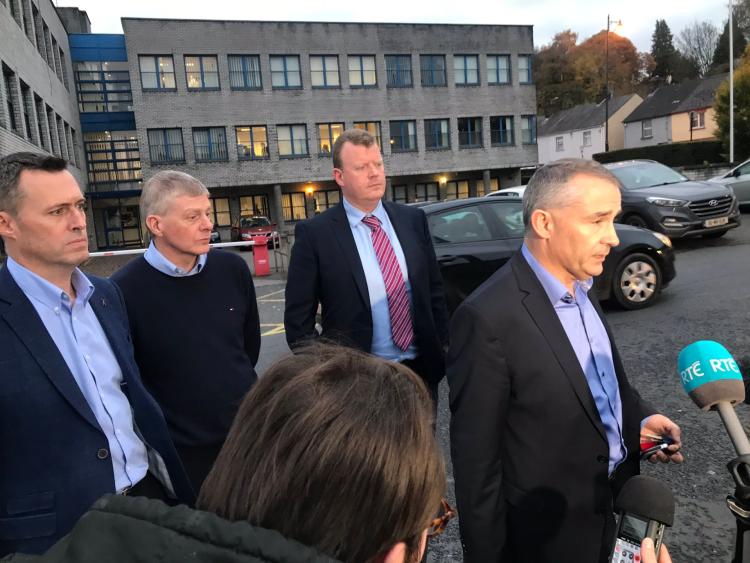 On Thursday evening last, An Taoiseach, Leo Varadkar appeared on RTÉ’s Six One News, assuring viewers that the ‘Government would not be found wanting’ in the wake of mounting tensions and death threats being conveyed to the directors of Quinn Industrial Holdings (QIH).

An honourable intention, but those who know the reality, could struggle to take what he said seriously.The Government is paddling furiously to stay afloat, because of their unnecessary expenditure of resources all over the place; the children’s hospital, continuing talks about broadband, whilst all the while cutting spending in places where more funding is necessary.

Moments after An Taoiseach’s assurances, the report carried an image of a wanted poster appearing around QIH operations.
What would happen, as someone asked succinctly on a programme on RTÉ, if such a poster was put up around Spencer Dock?We all know. It wouldn’t last long. It would be taken down.

All along the border regions, it’s well known that more resources are needed. Not novices fresh out of Templemore or Gardai who aren’t accustomed to the border. It is this writer’s belief that someone could be killed in this long continuing unrest.
Surely, even An Taoiseach must know that it’s very close to explosive around Ballyconnell and it’s regions.
Ireland has no money, simple as that.

Spending on the children’s hospital, will exceed the amounts being revealed and could end up hitting or exceeding the €2.5 billion mark.Don’t believe it? We will see.

We could not afford the children’s hospital, if we were honest. We cannot pay for half the projects the Government are announcing almost daily. We cannot afford to adequately staff our hospitals.

Irish people need to see Gardai on the streets. Anarchy is very close to breaking out. Rural people are becoming very restless, and are fearful of the way the country is being run.

The brutal attack perpetrated on QIH executive Kevin Lunney and the deepening tensions around Ballyconnell and surrounding areas threaten the stability of the border region. This is not a flippant complaint, it is very very real.
Ireland, and Irish society, is in a state of precarious disorder.

The country is not simply changed, it has been turned on its head and in the process has lost all its emotive feeling for anything much, except greed and selfishness.

Of course Irish people don’t easily forget, and some felt very sorry for Sean Quinn in the original upheaval. Perhaps that is still lingering, and it wouldn’t make any wonder.

Also read: Relief for service users of Longford Phoenix Centre as new manager gets set to take over