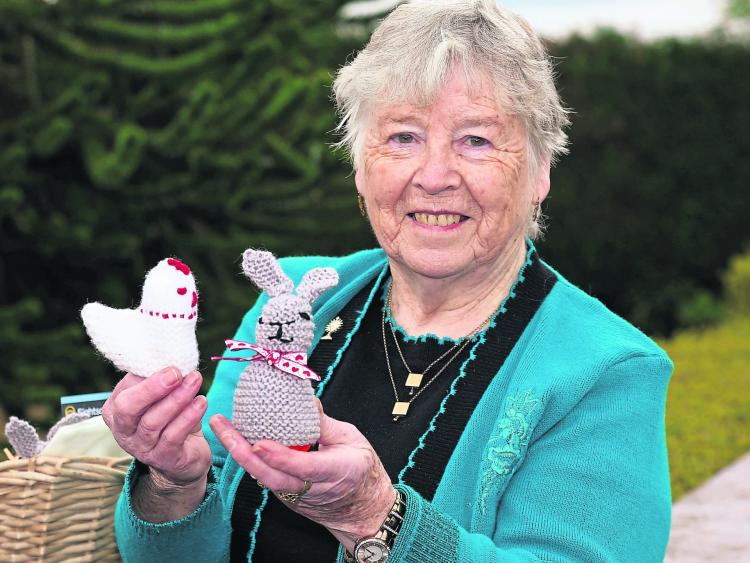 Nan McGoey, a native of Killoe, who has been selling her knitted Easter designs for charity for six years now PICTURES: SHELLEY CORCORAN

Nan McGoey is a Killoe resident who has dedicated every Easter to those less fortunate than herself.

Wife of the late Sean McGoey, who was a well known lawnmower mechanic and salesman in the area, Nan began her charitable venture in 2013 while a member of Club 89 in St Mel’s Cathedral.

“I was part of Club 89 in St Mel’s in Longford and some of the ladies there were knitting little chickens. They gave them to me and I decided to try and sell them for those less fortunate,” Nan told Kevin Forde of the Leader.

She filled the chicken designs with chocolate eggs and Nan’s first year saw her raise in excess of €600 for her chosen charity, Sight Savers, which helps fund life-changing trachoma and cataract eye operations in third-world countries such as Malawi, Zimbabwe, Tanzania and Bangladesh.

“The first year we raised over €600. It was always a charity close to my heart. It would be just devastating to lose your sight,” Nan explained.

“They lose their sight in these countries due to contamination in the water.”

This marked the start of what is now a six-year campaign by Nan, who took inspiration from the creations made by the Club 89 ladies, adding further designs through the years. She built up a small close ‘knit’ team over the years and now has Mai Mulligan, Liz McCaffrey and Patricia Murphy helping her create the designs.

They now not only make chickens, but also knitted bunnies and framed knitted crosses. Their ‘eggciting’ designs can be purchased in local shops such as Padraig Ward’s in Longford.

“We make them all on our own time. Roy Davis donates the eggs and we sell them at Bingo, Padraig Ward’s or people come up and buy them directly off us.

“We make crosses now as well. Fr Casey blesses them for us, We have him haunted asking him,” Nan laughed.

Each and every year Nan has been sending the fruits of the team’s labour to the charity and they have successfully played a part in saving the sight of many children, something Nan is extremely passionate about.

Sight Savers keep the team informed of how the money is spent and those who have been cured of blindness. In 2015, they successfully raised a total of €600 which equated to 10 cataract surgeries for children or 36 trachoma operations or medication for 7,500 people to fight river blindness.

Nan urged people to show their support in any way possible and called on the youth of today to ditch the computer games and pick up the knitting needles instead.

Nan conclude, “For the children who are all playing with machines, they should all try to do a little. Something so simple can make a big difference in a person’s life.

“We just want to thank everyone for buying and contributing and we just want to let them know that their money is being well spent.”

For anyone looking to donate or buy one of Nan's designs you can contact her directly on 043-3346615. Alternatively, you can donate directly to sightsavers at www.sightsavers.org.