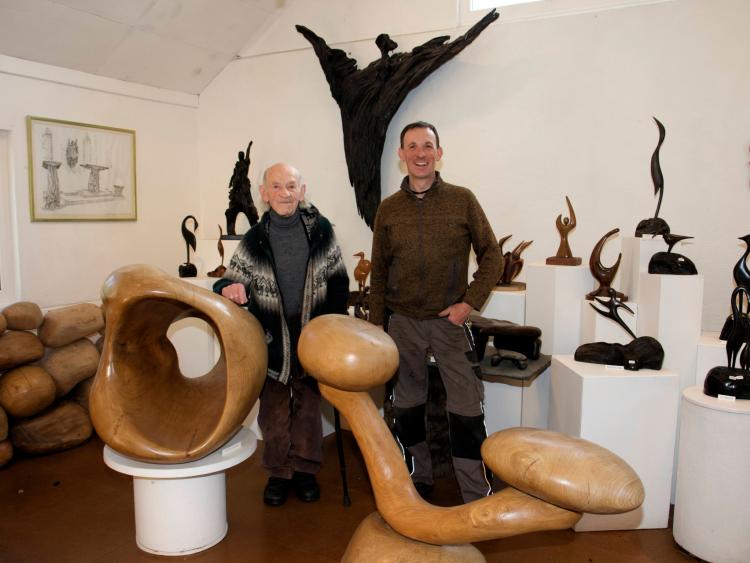 Michael and his son Kevin Casey at their base near Barley Harbour, Newtowncashel PICTURE: MICHELLE GHEE

Michael Casey and his son Kevin run a bog wood sculpture business on the banks of the beautiful Lough Ree at Barley Harbour near Newtowncashel in Longford.

A true family-run operation, both Michael and Kevin make their works of art from bog oak, bog yew and on occasion elm, making everything from commissioned figures and artworks to retirement gifts in all shapes and sizes. Some of the works created by the pair have been featured at the Atrium Gallery in Longford, Lanesboro Summer School, Carroll Gallery in Longford and Mullingar hospital.

The business was first founded by Michael in 1970. Michael’s journey began with a solitary piece of bog oak, discovered whilst on a family cycle around Lough Ree.

“While passing a bog he found a piece of bog oak. He picked it up, brought it home and started working on it,” Kevin Casey explained to the Leader.

“He knew nothing about bog oak, but It all started from that.”

Michael began his sculpting adventure by making craft items, everything from bracelets and ornaments to celtic crosses. Bitten by the sculpting bug, Michael soon had enough larger works to host his own exhibition.

“He had an exhibition in the early 80s in the school in Newtowncashel. That was one of his very first exhibitions. He then started to move away from craft designs and more into sculpting,” Kevin said.

Michael noted that he loves nothing more than resurrecting a lovely piece of wood, a passion most definitely passed onto his son. All wood used by the family is sourced within the locality. The wood is slowly air dried, before being hand sanded using only a wire brush. Each completed work by the Casey’s comes with a certificate of authenticity and carbon dating information on the wood used in the design.

“Some are even older than the Pyramids,” Michael added.

Kevin’s grá for sculpting goes as far back as his seventh birthday and he first joined the family business in 1995 after a short spell as an electrician. He is now the main man behind the running of operations, with Michael taking a step back from the lathe and helping out only with the designs. They both are currently working on a peacock design for the Newtowncashel Tidy Towns.

Inspiration strikes the Casey's in many different ways and they often take ideas from the beauty of wildlife. They say the bog creates the designs and the y simply help them along. Their passion for what they do is infectious and their sculpting legacy is sure to live on for five more decades at the very least.

“I just love it. Each piece is different , there is a great variety and I grew up with it,” Kevin concluded.