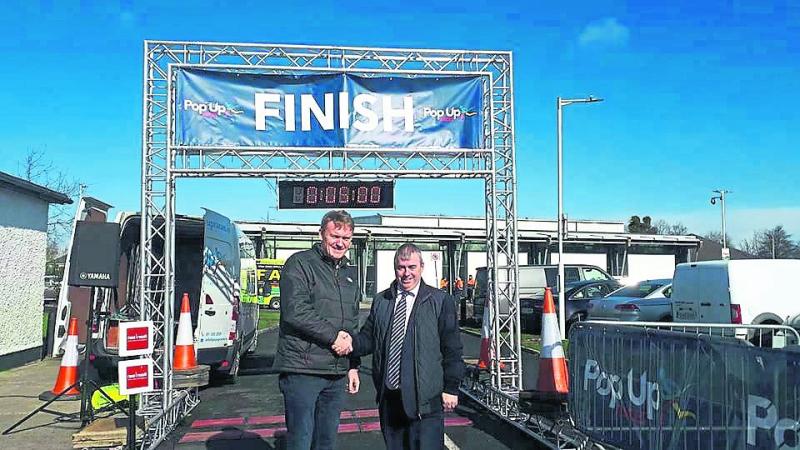 Murmurings of unease between local Fine Gael general election candidate Cllr Micheál Carrigy and OPW Minister Kevin 'Boxer' Moran would appear to be wide of the mark, judging by this hearty looking handshake (above).

The pair exchanged pleasantries at Longford Athletics Club's annual 5k/10k run recently on foot of around €650,000 in funding for the 2019 Housing Adaptation Grant scheme. It was a far cry from talk of there being no love lost between the two men even as recently as the back end of last year concerning who would be the first out of the traps in making government led funding announcements.

Asked this week about those rumours, Cllr Carrigy was quick to play down such talk.

“Sure why would there be? He is a government colleague.”

Whether that same mindset holds sway during the heat of a general election battle is very much open to question.

Also Read: Hit play Wake in the West back in Longford by popular demand

Mark Casey has never been the biggest fan of the present government.

There was further evidence of that last week as the Lanesboro based Independent tore into his Fine Gael colleagues over their role in the establishment of Irish Water. During a debate on the fallout from a recent water outage in Kenagh, Cllr Casey couldn't help but to take aim at its chief orchestrator, former Environment Minister and now EU Agriculture Commissioner Phil Hogan.

In his very best poker face look, Cllr Casey glared at those in the FG benches, claiming Irish Water's introduction had been nothing short of a “joke”.

“And Phil Hogan and all ye boys that supported him have resulted in this happening.

“So actually, you can blame yourselves for this disaster. It was absolutely 100% political. It was a disaster from day one and now ye’re reaping what ye sow, 100%.”

You get the feeling messrs Murray, Ross and Farrell won't take such vitriol lying down.

Pump thinks we haven't heard the last of this one, not by a long shot.