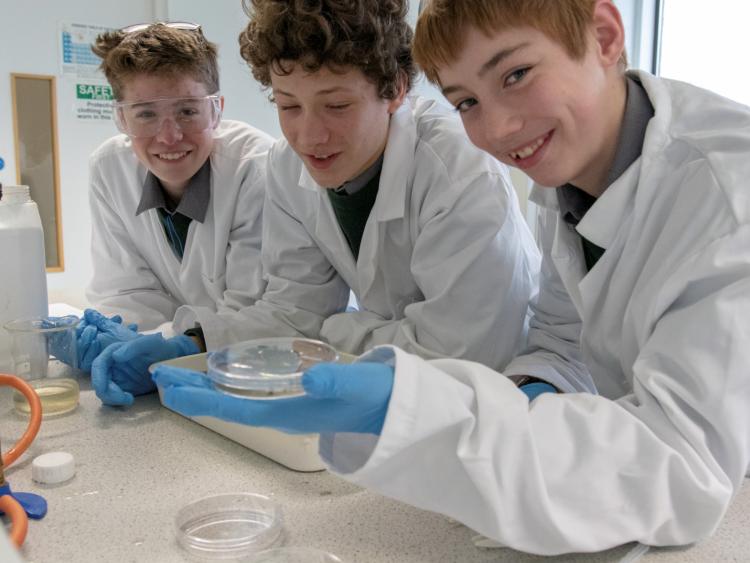 Athlone Institute of Technology celebrated Science Week 2018 in style with a whole host of
activities and events specifically designed to spark imagination and delight secondary and
primary school children across the Midlands.

From line dancing senior citizens concerned with active ageing and the institute’s first intergeneration games, to fermented foods and gut health, ancient earthy pottery, origami from outer space and a rogue crayfish, attendees were treats to a wide array of workshops, talks and interactive learning experiences.

Coordinated nationally by Science Foundation Ireland (SFI), the institute was one of twelve
centres across Ireland to celebrate the wondrous world of Science, Technology, Engineering
and Maths with the view to encouraging the future matriculation of students into these areas.
This year’s festivities were opened by former Minister for Education Mary O’Rourke, who
aside from being a notable luminary in her own right and a trailblazer in the world of Irish
politics, is one of the institute’s Distinguished Fellows.

Mrs O’Rourke highlighted the importance of events like SFI’s Science Week in making
science more tangible for people: “When people talk about science it’s often ‘up there’,
something that sounds very exciting but feels largely unattainable. In truth, science is about a
whole host of other things; it’s about the interaction between people, it’s about aging, active
ageing, it’s also about cultural and social activity. In other words, it’s about people.”

Exemplifying this, the South Dublin Senior Citizens Club were in attendance to give a line
dancing demonstration and to participate in the institute’s first Intergenerational Games. The
group of senior citizens, whose average age is 76, competed against AIT students in three
sports: Badminton, Table Tennis and Pool. Aside from the fun and frivolity of it all, the
games were intended to highlight the importance of active ageing for the continued health of
older people in the community.

According to Dr Niall Seery, Vice President of Academic Affairs, the South Dublin Senior
Citizens Group are a testament to the positive benefits of active aging: “As Irish playwright
George Bernard Shaw once said, we don’t stop playing because we get old. We get old
because we stop playing. This is a group who are living their lives to the fullest and inspiring
others to do the same through their social and cultural engagement. They are advocating
active aging for the health and wellbeing of all individuals and their communities.”

From a scientific perspective, Organiser and Lecturer in Sport and Recreation, Joe Tierney,
was on hand to take measurements, including heart rates before and after exercise and
recovery, as well as the number of steps participants had taken over the course of the events.
The same was done for the participating Sports Science students, whose average age is 21.

“Engagement in physical activity enhances people lives but it’s not just the physical element
that’s important, the social element is also crucial for active, healthy and happy aging.
Physical activity, whether that be through sport or line dancing, brings people together and
gives them a reason to communicate. Today’s Intergenerational Games, which saw older
people mixing with younger people and vice versa, was a huge success and of benefit to both
groups,” he said.

Over the course of Science Week, which ran from November 11th to 18th, attendees were
also treated to a series of interactive workshops and talks, including a Junior Cycle Project
Event that looked at Athlone’s freshwater ecology, a microbiology lab, everyday science in
the kitchen, a ‘who done it’-style forensic lab and a look at the ingredients in our food.

As part of a series of bitesize lunchtime lectures, attendees also learned about the secret life
of bees, origami in and out of outer space, pottery: an ancient earthy science and lastly, drugs:
the good, the bad and the ugly, the latter of which was delivered by Lecturer in the
Department of Nursing and Health Sciences, Dr Gary Stack. Dr Stack’s talk looked at
people’s experiences with and management of pain, particularly in relation to pain
medication.

“Pain is such a broad topic and can range from a tooth-ache to severe and debilitating back
pain. As a community pharmacist, I have spent many days helping people to choose the right
solution for their symptoms. By understanding more about the science of pain and the
medicines we use to treat it, people can be empowered to make better choices for their own
healthcare,” he said.

The week rounded out with the ISTA Secondary Schools Chemistry Quiz Final, which was
hosted on Thursday evening in the Hospitality, Tourism and Leisure building and a series of
Anyone4Science roadshows, which gave students the opportunity to carry out their own
scientific investigation or activity during the workshops - giving them a ‘hands-on’ science
experience.

The SFI funds oriented basic and applied research in the areas of science, technology,
engineering, and mathematics (STEM) which promotes and assists the development and
competitiveness of industry, enterprise and employment in Ireland. The Foundation also
promotes and supports the study of, education in and engagement with, STEM and promotes
an awareness and understanding of the value of STEM to society and to the growth of the
economy.