Ballymahon VS Halloween Stories: 'The Darkness Within' 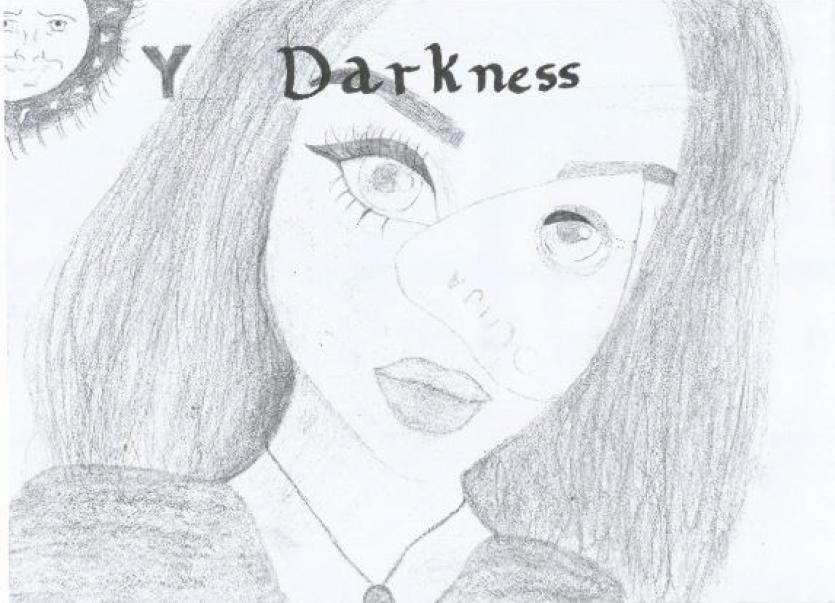 Summer was here. Everything just felt so joyful. I knew this summer was going to be my best. I was 15 and everyone knew me as the girl with the black hair and knee boots. I wanted to make a name for myself. That’s why when I got the text message from one of my friends that she was throwing a party, I knew this was it.

It was the night of the party and I pulled up outside her house. Her house was grand with thick, green ivy sneaking up the walls. I walked to the door. I knocked on it and waited for a reply impatiently. I heard a faint ruffle inside but nothing too loud. It felt dead compared to what a party should feel like.

Elise, my best friend, opened the door. She greeted me with a smile and a warm hug. I followed her inside. I’ve been to her house so many times but today I felt unwelcome as the house felt cold and malevolent.

Elise always had a happy life but today she made me feel on edge. Cautiously, I walked to the living room.

There, two people were sitting around a small coffee table on the floor. I could barely make out their faces because the room was dark and faint with the smoke from the multiple burning candles in the room.

Vicky and Ethan. Ethan and Elise haven’t had the best relationship; he liked her when they started high school but she rejected him when he asked her out. I was shocked to see him sitting there.

"So I haven’t been completely honest with you Abbie," Elise said. The feeling of panic grew within me.

"I kind of gathered that with the lack of people,” I said, trying to hold back the tears. I noticed something on the table. I didn’t think much of it until it finally registered in my head.... Ouija Board.

There were candles set around it. A tear rolled down my face. I slowly started to take a few steps backwards but I felt a hand on my back. This was an unfamiliar hand. I turned around swiftly and stood my ground. I felt the colour drain from my face as I saw a familiar, evil face.

The one person who annoys me more than anybody. Danny. “Not you.” At this point I was feeling so many emotions I didn’t know what to do. I felt very light headed. Ignoring how I felt I continued to show my anger.

"What’s all this about. An Ouija Board? Elise you know if anyone ever found out they..." I was interrupted by Elise and my anger grew.

"But how would anyone find out? If anyone found out, I know it would be you who told them. So, that means something bad might happen to you. You wouldn’t want that to happen, would you?" Elise’s' tone in voice changed. She felt evil now.

"What’s wrong with you?" I yelled. Danny put his ice cold hand on my shoulder. I tried to push his hand away but his grip just grew tighter. His sharp fingernails dug into my shoulder. As I cried in pain he pushed me onto the floor violently.

We sat around the Ouija Board. I felt more and more unsettled as I sat there. The smell of the burning candles was strong. My eyes fixed on the dancing flames. Elise read the rules. Her eyes were unnatural.

We played. Everyone felt different. Almost robotic. They had very little response to any of the movement the planchette made.

We played for roughly ten minutes. I sat back and leaned against the wall. Everyone stared at me as they followed my actions.

The planchette started to dance across the board. Everyone was nearly two feet away from it at the most so nobody could be tampering with it. I rushed over towards it to see what it was spelling out. “Y...O... U never said goodbye," Megan said.

The board flew across the room and the candles blew out. The lamp in the corner of the room flickered.

Megan was thrown across the room. She hit the wall and a picture fell on top of her, leaving her with gashes on her face. She let out a small cry but the sound of crying was drowned out by the sound of the light bulb overhead smashing.

All went dark. A light flickered in the corner. Something was seen in the corner of the room. It was tall. Too tall to be human. It walked towards me.

"Who are you?" Danny yelled as it grabbed me by the neck and lifted me into the air. It tossed me across the room. Stumbling to my feet I searched for the door.

The dimly lit room made it difficult to find the door but after frantically searching the wall I found the handle. I pulled at the handle but it didn’t budge.

The figure walked towards Elise and she stumbled to the window. She screamed and started banging on the window. I pulled at the wooden door again and it finally opened.

I ran down the hall towards the front door. I heard a scream, followed by a crash coming from the living room. I ran at the door and tried to open it. It was locked.

I ran towards the kitchen. There was a back door there. I got to the kitchen and I slammed the door shut behind me. The roaring from Danny in the living room convinced me to move faster.

I ran towards the back door. I sprinted out the door, grabbed my phone and dialed 999. They answered. I heard from the other line, someone’s voice. I told them everything that happened.

An eerie voice from the other line spoke: "It was your fault this all happened".

I hung up in complete disbelief and I heard a scream inside followed by an evil laughter. I ran down the street screaming for help. Nobody answered as it’s almost 2am.

I collapsed on the floor and started screaming. Tears streamed down my face stinging the small gashes on my cheek. The smell of blood and death reeked off my clothes.

The night grew silent with small distant noises of the passing cars on the nearby motorway as I lay on the pavement.

Midsummer Murder is what everyone knows that night to be. I’m the only one who lived. Every so often I get a phone call off an unknown number telling me that I forgot to say goodbye. The voices sound like Elise or Danny but they’re dead.

I can’t explain that night. Nor can I explain those phone calls. All I know is I am not insane and what happened that night is real. Even though the staff here don’t believe me and everyone who put me into this asylum doesn’t believe me.

But I know Elizabeth does. That figure that night now follows me around and keeps me safe. Whenever someone hurts me she hurts them. She’s my only friend that will listen to me. I’ve lost people in my life but also found her she’ll truly love me.